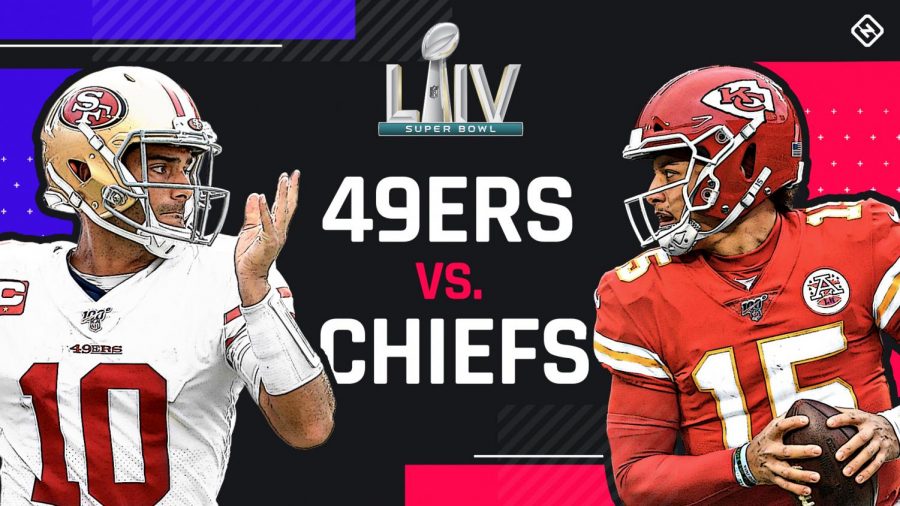 Super Bowl LIV (54) headlined the Kansas City Chiefs and the San Francisco 49ers as the Chiefs outlasted the Niners 31-20 at Hard Rock Stadium in Miami, Florida. Pop-star Demi Lovato started things off on Sunday night singing the National Anthem. Of course, the Chiefs rallied from behind with another comeback performance as they did all playoffs. The run was impressive as the Chiefs scored three touchdowns in less than six minutes to give coach Andy Reid his first Super Bowl victory. For much of the game, the 49ers used the style of play that got them to the Super Bowl with their pass rush attack and running game.

Patrick Mahomes struggled early throughout the game, but started heating up in the fourth quarter. He threw for two touchdowns with 141-yards in the fourth quarter. The rally, led by quarterback Mahomes, secured his team’s chances on winning the game as well as him winning Super Bowl MVP. Usually, defense wins championships, but that was not the case late in the game this year. As the 49ers were struggling late, the Chiefs stormed back and took advantage of the stalled Niners offense. The ability and leadership of Mahomes to rally his team at an incredibly high level was a thing of excellence that they managed to do all post season.

The halftime show, starred Shakira and Jennifer Lopez with Shakira leading the show off for J-Lo to follow up. The performance showcased plenty of high energy music and dancing that would surely get you out of your seat. The show sparked a huge celebration with women in the Latina culture. The halftime performance, which only lasted fifteen minutes, sparked 103.2 million viewers. Guest appearances were made by J Balvin, Bad Bunny, and Lopez’s daughter, Emme Muniz. The selection of two Hispanic pop icons seemed to be a perfect fit for the crowd in Miami. This was the first Super Bowl halftime appearance for both Shakira and Jennifer Lopez. Shakira performed many of her top hits including “Hip’s Don’t Lie,” “I Like It,” and “She Wolf.” J-Lo performed many of her top hits as well including “Jenny from the Block,” “On the Floor,” and “Waiting for Tonight.” An iconic moment of the show was when J-Lo first appeared in the performance electrifying the crowd from high up on the stage. Overall, I really enjoyed what both women brought to the stage in front of an entertained Miami crowd!

For many people, the game is not the event people tune into watch, it is the commercials. The commercials during the Super Bowl are always a must see, ranging from many companies using different ideas. A known commercial form this year’s event was New England Patriots Quarterback Tom Brady announcing during a Hulu commercial that he “wasn’t going anywhere”. Many people are now suggesting Brady may stay with the Patriots during this off-season’s free agency. Another big time commercial was the NFL Next 100 commercial that had every big name in football history in it. A young football player stars in the commercial running through many obstacles to get to Hard Rock Field in Miami. The commercial adds some setting from the past, present, and presumably future.

Overall, I really enjoyed the game, halftime performance, and commercials. Both of the team’s players, staff, and management personal truly gave it their all in the game. The Super Bowl is a must watch event every year starting from the football game to the entertainment. We now await for Super Bowl LV (55) next year!