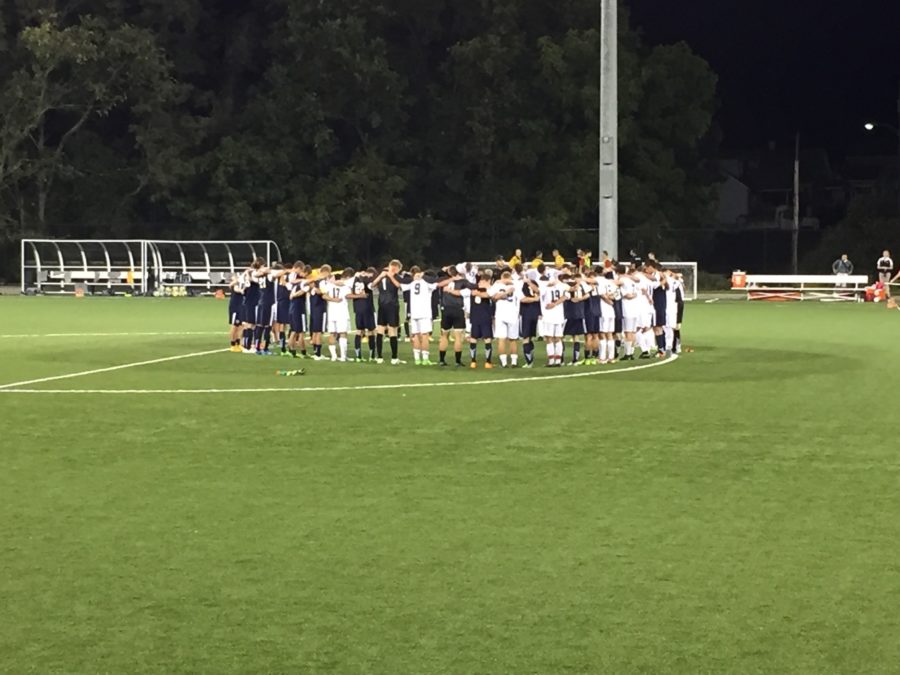 Players from both Cal U and Cedarville gather in the center of the field after the game to pray.

The Vulcans trumped the Yellow Jackets 1-0 for their first home win of the season. California’s win was significant due to Cedarville being ranked #24 in the nation last season. The exciting match came down to the last five minutes with yet another goal from Cooper Amos.

Amos stated “He [Mike Cummings] gave me the cross and I just finished it” with only 4:08 left in the contest. The goal was extra special since both Cummings and Amos grew up and played soccer together in their hometown, McDonald, PA. Cummings stated “If it wasn’t for him and his family I wouldn’t be playing soccer,” this is Cooper’s freshman season and Mike’s sophomore season, “now we are both here playing at a collegiate level.”

After the goal the Yellow Jackets pressed tightly until the end.

Throughout the game there were many breathtaking plays such as a laser shot by Cummings with 30:15 left in the first. Not more than a minute later teammate Eric Campbell followed up with another direct shot leaving the crowd in awe.

In the second half captain Elliot Taylor blocked a much needed shot that would have resulted in a goal. After the game he spoke about the play “Sometimes you just have to put your body on the line to win games.” Another notable play within the second half, was that of captain Eleazar Luciano who collided with a Cedarville player when going for a header resulting in both players absences for the rest of the game. Once again there was a couple of elegant saves from goalie Lucas Exner, one was a diving save with 12:02 left and then again at 11:40.

With this win California’s record improves to 4-1-1 and are in 6th place in the PSAC despite the 3rd best record overall. Cedarville fell to 3-3-1 and are third in the Great Midwest Athletic Conference. This Saturday, September 24th, the Bloomsburg Huskies travel here for a PSAC match at Phillipsburg Complex at 1pm.