After two years of pandemic-dampened festivities, long-time organizer and former Frederick Douglas Institute director Kelton Edmonds says that hip-hop is all about adaptation, innovation, and evolution. 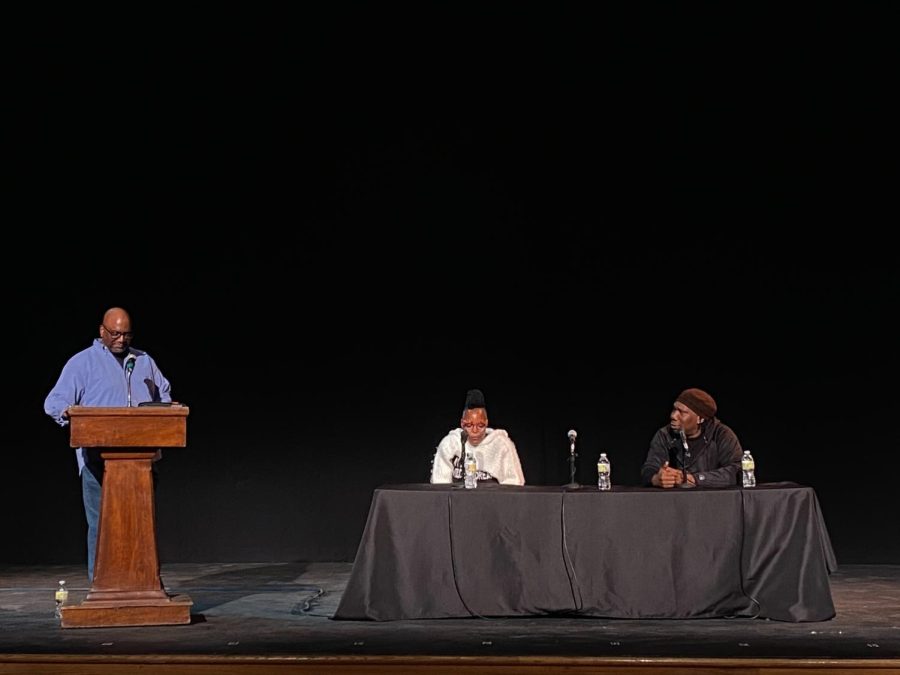 The title of Expression, Community, Wellness, & New Frontiers, according to Edmonds, covers all issues facing the Hip Hop community today, including mental health: “Hip Hop has always been at the forefront”, said Edmonds, “dealing with whatever issues are impacting us.”

Edmonds has been surrounded by Hip Hop since childhood and has been on the path of African American rights research since his junior year in college. He bore witness to the cultural shifts that Hip Hop brought along throughout his formative years, and noted that he sees “a lot of overlap” in contemporary society: “We see young people forging this major cultural movement”, said Edmonds, “not just confined to urban centers but pervasive through the United States and the world.”

The week’s events, organized by Dr. Edmonds and Cindy Speer, kicked off on Tuesday, April 26th with art exhibits by Afro-Futurist Brandon Jennings with additional events from Skeletor and Aunt Amazin. Wednesday featured a pressing topic in the world of Hip Hop- how music is used as catharsis against violence, grief, loss, and oppression. These events were all precluding the keynote event on Thursday, April 28th, featuring Sociology and Criminal Justice professor Zoe Spencer as well as noted Hip Hop legend Lawrence Parker, colloquially known as KRS-One.

Dr. Edmonds spoke very highly of KRS-One, noting that he has seen his performances “at least twenty times.” Touting the Hip Hop pioneer as a close friend, Edmonds said that “he has the most to say, and even with his longevity in the game he still puts out music.”

Dr. Spencer and KRS-One, moderated by Cal U Associate Professor Todd Carlisle,  enlightened the crowd with historical interpretations of Hip Hop today, focusing on the much-ignored impact of the oppression and historical revisionism of African history. KRS-One specifically spoke about the eroding of national identity among the melting pot of American cultures, and how Hip Hop is the proverbial saving grace to push back against the establishment: “Every culture has lost its sense of nationhood”, said KRS, “If you live in this country, you forgot what it was like to be your grandmother.”

However, KRS was not defending modern Hip Hop, alluding to historical accounts of Portuguese traders giving the young princes in African tribes toys to win their trust, only to enslave them later on: “What’s the state of Hip Hop? It lacks maturity.”

KRS noted the dampening of the true state of Hip Hop by outside forces, making the original techniques extraordinarily rare in place of corporate, mainstream music. “This sacred thing, this art, got paved over by a greedy corporation that wanted to take its place,” said KRS, “So now it’s a privilege to know original Hip Hop.”

Modern Hip Hop was also discussed in terms of female empowerment, where Sociology professor and social justice advocate Dr. Spencer truly shined. Her expansive knowledge of racist Eurocentric institutions and their continuing effects on black women specifically fit neatly into the contemporary female music industry. “Hypersexuality, violence, and aggression”, she said, “were the predominant stereotypes that were used to define African women, and then African American women.” Spencer also noted the contradiction of glossing over violence against African women; instead opting for exaggerating the stereotype of violence from African women, both during and after slavery. “No one wants to talk about the violence against our foremothers, my foremothers.”

Keena Thomas, a Freshman Fisheries and Wildlife major, says that she’s been “surrounded by the hip hop and rap genres of music from a young age.” Her experience at the keynote event was described as empowering, exciting, and saddening. The importance of an event like this was not lost on Thomas, saying “I believe that everyone, especially people of color, should take the time to learn the history.” Despite the troubling history, Keena remains optimistic about the future of the music industry in general, and believes that specifically, Hip Hop is a culture that is open to everyone: “That’s the best part about it.”

The Hip Hop Conference concluded on Friday, April 29th with an additional three events, including a lighthearted roundtable of “My Era of Hip Hop is Doper than Yours”, followed by a more serious discussion of mental health within the Hip Hop community. However, the third event, the finale, was arguably the most important. A group of four panelists discussed common misconceptions of Critical Race Theory, which was originally established as a framework of legal analysis taught in graduate schools across the country in the 1970s. Only recently, however, has it become a national issue, thanks mostly to Conservative media. Panelists included Clarion Sociology professors Ralph Tienes and Jane Walsh, Cal U associate professor Michelle Torregano, and West Virginia State Delegate Sean Hornbuckle.

The panel itself offered insights into the importance of a study like CRT, with specific insights from Delegate Sean Hornbuckle on the political proceedings of the legislation surrounding CRT. He also voiced his personal frustrations with maintaining the truth within a conservative state like West Virginia: “They have purposefully mystified what CRT is to be able to scare certain folks.” Hornbuckle even relayed a story in which a colleague of his could not identify a single instance of CRT being taught in K-12 within the state, proving even further that the entire controversy is manufactured.

Professor Walsh added that CRT is the ideal “Boogeyman,” in the sense that it can be interpreted in many different ways. “That ambiguity of Critical Race Theory, that’s what makes it the perfect villain/weapon.” Professor Tienes then called out the frenzied treatment of CRT by the media, relinquishing that the practice was, in reality, “barely taught in graduate schools.”

Dr. Torregano, being a long-time educator and advocate for social justice, offered her thoughts on CRT before the panel took place, saying that “Past is prologue. If you don’t learn from history you’re doomed to repeat it.” Despite Torregano’s efforts to remain neutral in her classrooms, she remains worried that the Conservative media machine will continue to spin CRT into something that it isn’t: “I really thought the whole buzz would’ve died down, but it’s not. It’s fueling the Conservatives to make this an election issue.”

Torregano affirmed that the topic of CRT has effectively put both sides of the political spectrum on the defensive, despite many Americans have never heard of it prior to last year. Now, Torregano feels the pressure that the manufactured outrage is providing: “The fact that there are many intelligent, well-informed minorities, is a threat to the Conservative right.” Despite this issue being turned onto educators like herself, Torregano remains steadfast in her efforts to bring light to the true America that we were all born into, declaring herself “an unequivocal and unashamed advocate for social justice.”

The Hip Hop conference has no intention of ignoring the social or cultural issues that arise within the next year. Expect to see Dr. Edmonds and others back in action for the 17th installment of the event. Any student interested in the events discussed should reach out to Dr. Edmonds at [email protected]