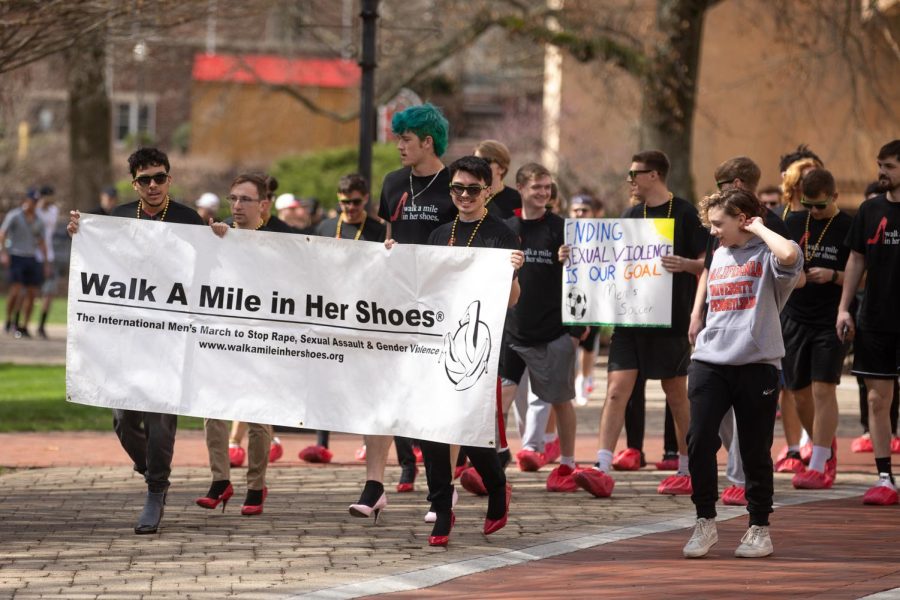 On Tuesday, 130 men representing about 15 student organizations and groups, donned shiny, red high heels to walk a mile around the campus. After being canceled for the past two years due to the COVID-19 pandemic, the Walk a Mile in Her Shoes event returned for its tenth year at Cal U. Organized by the End Violence Center, the Walk a Mile in Her Shoes march aims to raise awareness around sexual assault and violence.

“Statistically, one in four women will be sexually assaulted before they graduate and that is too many so in raising awareness, we have the men come out and support and understand about violence against women,” according to Nancy Skobel, director of Cal U’s End Violence Center.

The event started at 11 a.m. in front of the Convocation Center where participants were provided with high heels by the End Violence Center. Heels have been purchased throughout the 10 years of the walk and are sanitized and cleaned for reuse.

Students and staff lined up on sidewalks to watch as the group made their way down Third Street before turning through the Quad. They then walked on Riverview Drive next to the train tracks before returning to their starting point.

Despite not being able to feel his toes, criminal justice major Ward thought it was important to participate.

Miranda Palmer, communications major and Gamma Sigma Sigma service vice president, worked with the End Violence Center to help organize the event. She called the event successful and said student support was both strong and enthusiastic.

“We think it’s really important [to raise awareness] here because a lot of people see domestic violence as a women’s issue when really it’s on all of us so we like to invite [the men] out and they were excited to do it just as much as we are excited to plan it,” said Palmer.

Palmer said they saw many signups over the past few days, many representing Greek organizations and sports teams. Some groups of marchers included the men’s basketball team, the men’s soccer team, academic student success, STAND, the theatre department, Theta Xi, Sig Tau and other fraternities.

Joseph French, political science major, was walking with his fraternity, Fiji. He said the event was a fun reason to gather with others and do something bigger than “just hang out like we usually do.”

French acknowledged that Greek life is a place where sexual assault occurs and is something that remains stigmatized.

“It’s good for us to come out and show that we aren’t supporting and that we are trying to take steps to make it a better environment for everyone and kind of change that stigma in Greek life,” said French.

Skobel said this year they saw a higher number of participants than in past walks. Everyone finished and had fun, she added. This event comes in April for Sexual Assault Awareness Month.

“It’s everyone’s responsibility to keep our students safe on campus,” Skobel said quoting the Green Dot strategy, a violence prevention strategy that depends on the power of bystanders to prevent violence and shift social and cultural norms.

This is not the first time Colin Majhan, Fiji member and criminal justice major, has participated in Walk a Mile in Her Shoes. Majhan said he wanted to be here again to show his support of women’s rights, calling it a “great event.”

“Do it,” Majhan said to encourage future participation. “It doesn’t hurt and it’s good for the community. It’s good to show your support. It’s good to bond over the experiences that women go through on a daily basis.”