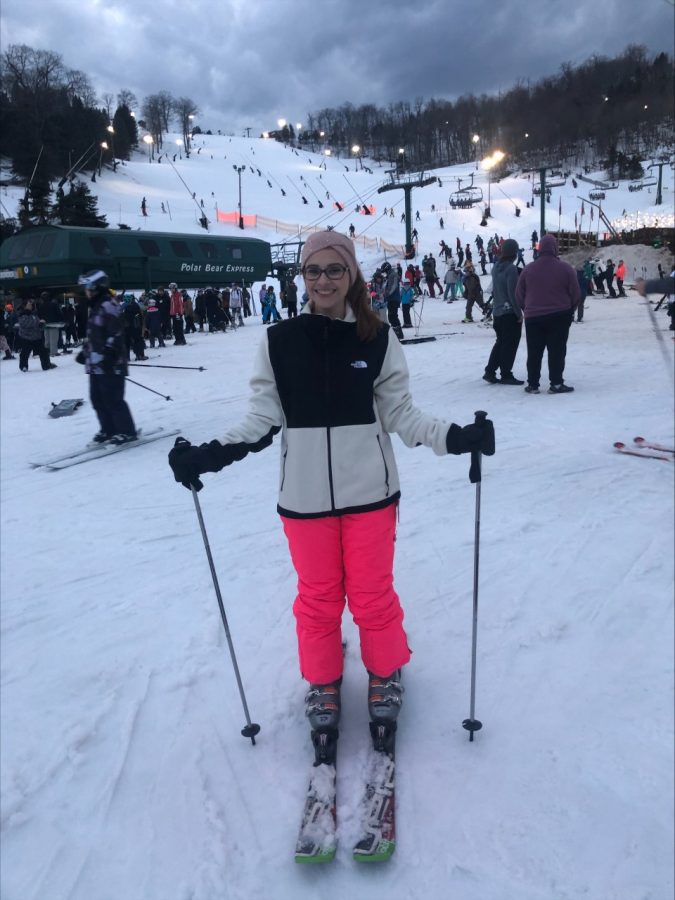 I have never been the type of person to be fond of participating in sport-like activities, especially ones that affect the way I use my feet, so it raised a few eyebrows when I told my friends I wanted to go skiing. It is something I wanted to try for years but I could never find the courage to do it. I’m the type of person that likes to stay on the safe side. If I try to do something adventurous, like hiking, I always lag behind everyone else. If I try to do something fun, like go to an amusement park, I let my fear of the big rides get in the way. I expected the experience to be difficult, but I hoped it would be fun even if it wasn’t successful.

One of my journalism classes inspired me to finally give skiing a try. I needed to partake in some sort of activity, and I knew it wouldn’t be interesting if it wasn’t something that made me uncomfortable or scared me a little.

I felt the tingly feeling of anxiety start to form in my stomach and my legs as soon as we set the GPS for Seven Springs, a ski resort an hour away from my college apartment.

“You’re going to fall. More than once,” my friend James Campbell stated from the backseat of the car. “If you think you’re not, you’re wrong.”

James is an experienced skier and has been going to Seven Springs since he was a child. He is also very athletic, and it seems like he is naturally good at every sport. I felt relieved that he was going with me and my boyfriend, Matt Bean, because we needed someone there to teach us. It was his first time skiing too, but he wasn’t nervous about it at all. He looked very relaxed while driving.

When we arrived, I immediately took in the size of the hills. Every single one of them looked steep and menacing, towering over me like skyscrapers. The resort itself was surrounded by thousands of pine trees and the building was made out of stone, which made it feel like a beautiful, fancy place where I didn’t belong. Hundreds of people were gathered around the handful of picnic tables that were scattered around outside, and they looked excited to hit the slopes.

It was time to suit up. My ski boots felt like they were squeezing the life out of my feet and like they each weighed five pounds. My feet clunked every time I took a step, which were baby steps so I wouldn’t fall in front of everyone. I felt embarrassed and out of place. My hot pink ski made me stand out from everyone else who wore mostly black, white and gray. I could tell some of these people were consistent skiers based on their outfits, especially this woman who was wearing a red, white and blue jacket with matching pants. She looked like she could have been an Olympian.

James was wearing a thin, red flannel over a t-shirt. I wondered how he wasn’t cold and if he was concerned about it getting wet from the snow. Matt was wearing a grey, North Face hoodie and baggy snow pants. I was bundled up in a jacket and a light pink headband that covered my ears. I get cold very easily.

The three of us walked out into the snow and I clicked my snow boots into my skis. I watched as the experienced skiers swiftly moved down the mountain and thought about how they made it look so easy. James pointed out the bunny hill that I would be practicing on. It was definitely a million times smaller than the slopes, yet somehow still bigger than I thought. Matt could see the fear in my eyes.

“You’ll be okay. I got you,” he said as we made our way to the hill. I fell within 30 seconds, and everyone chuckled.

Pulling the entire weight of my body with the poles on a flat surface felt like an extreme workout. I strained every muscle in my arms only to move about an inch. However, any time the hill started to slope down a pinch, my skis immediately started to glide and felt out of control.

“To stop, you have to pizza,” James said. This meant pointing my skis forward in a triangle shape, bending my knees and leaning back. I tried a few times, but I couldn’t get the proper form down. I knew this was a bad sign.

I positioned myself right at the top of the bunny hill. After taking a deep breath, I pulled myself forward and lifted my poles from the snowy ground. My skis were picking up speed, and I felt like I was going too fast. The cold wind was pushing against my face as I started to slide left and right, yelling for help that wasn’t coming. I hit the ground and stared up at the cloudy sky that was starting to darken.

“I’ve just hit peak embarrassment,” I yelled so Matt and James could hear me, but also so everyone else around me could hear. I wanted it to be clear that this was my first time skiing and not that I was just terrible at it.

James skied over to me and pulled me up quickly with one arm.

I tried again. The same thing happened, only this time I was headed straight for a man who was standing still in the middle of the hill. I started yelling for help again and tried to pizza unsuccessfully. I leaned back with all of my might and forced myself to fall. I glided against the soft snow and stopped about an inch away from the man’s skis. I sighed. He didn’t even notice.

Everyone else was zooming past me and looking at me down on the ground. There was no way they couldn’t notice me in my fluorescent pants. I got back up and set for the bottom of the hill again. I fell a few more times, but I finally reached my destination. Matt fell too which made me feel a little better.

In order to get back up to the top, we had to slide our skis onto an incline that looked like an escalator without steps. I learned skiers call this a “magic carpet.” I watched other people get on, and I wondered how their skis were able to cling to it and how they were able to stand perfectly still as it pulled them forward. While I was finding the courage to slide on a line began to form behind me. I pulled myself on and felt my skis grip it tightly and I stayed very stiff. When I reached the top, the man who was working this machine gave me a high five.

I was proud of myself that I finally completed the bunny hill and was ready to move on to a bigger slope to have the adrenaline-filled experience I came here for.

“You have to go down the bunny hill at least one more time before we go down the slopes so I know you can do it,” James said.

I knew he was only looking out for me. I felt a little more confident this time. I started to go down the hill but was afraid again of how fast I was going. I fell right next to magic carpet and everyone riding it was watching me struggle to get up. I tried to pull myself up with the poles, but my upper body strength is nonexistent.

“Grab on,” said Matt, who was extending his arm out to me. I grabbed onto him and almost pulled him down with me. We looked ridiculous.

“Point your skis perpendicular to the mountain,” I heard a voice yell.

I looked around and noticed that a woman going up the incline waving at me so I knew the voice came from her. I was confused because my skis were perpendicular to the mountain, but I appreciated her trying to help.

James was laughing at us from the bottom of the hill. I told him to go ahead of us so he could catch me at the bottom, but I didn’t realize I would get stuck in the middle. I tried so hard to pull myself back up that I could feel the burn build up in my shoulders and wrists. The cold snow found its way inside of my gloves and on my back. It was 56 degrees on that February night, but the breeze blowing off the mountain made it feel much colder.

After what felt like 20 minutes of me struggling while people watched, James came back up and helped me up again.

“Look, if she can do it, you can do it,” Matt said while gesturing to a toddler, who could not have been older than 3, shredding down the hill on her snowboard.

“You’re doing so great,” her mom cheered to her, right as they passed me. I felt like I was being mocked.

This gave me the inspiration I needed to get to the bottom of the hill. I received another high five on the way back up which I thought could not be genuine after the man saw me struggle for my life right in front of him.

I told Matt and James that I didn’t want to try the slopes anymore and they tried to encourage me. James really was a great teacher; I just wasn’t a great student. I put so much pressure on my body that whole time, which was over an hour, and I just wanted to sit down. I told them to go without me.

I sat on a cold rock next to the ski lodge and sulked. It was now dark, and the lights were shining on the slopes, making the snow sparkle. The resort was to my left, and I thought about how warm and cozy everyone must have been inside in the heat while I shivered by myself.

A woman who could not have been much older than me sat down a few rocks over. I didn’t mean to eavesdrop on her phone conversation, but she was so loud that I couldn’t help it.

“There aren’t any small hills here,” she cried.

“Then why don’t you get something to eat?” asked who I assumed was her mother.

“Because they told me to wait,” she whined.

At least I wasn’t alone in this process. I looked over at her and remembered seeing her tumble a few times on the same hill I was on. I wanted to talk to her and try to make light of the situation, but I didn’t want to be awkward. I think we would’ve made great friends.

I hummed along to the Red Hot Chili Peppers song that was playing inside the nearby restaurant as I watched hundreds of people ride the ski lift up the mountain. I was jealous. I have always wanted to ride one. I knew I would’ve had a tough time up there since I thought the bunny hill was hard. I did, however, feel proud of myself for leaving my comfort zone even if a few people laughed at me. I finally understood what skiing feels like, and that’s what this whole experience was about. I couldn’t stop myself from daydreaming about how astonishing the view had to be from the top of the mountain, though. Maybe I’d get to experience it next time, just not this time.