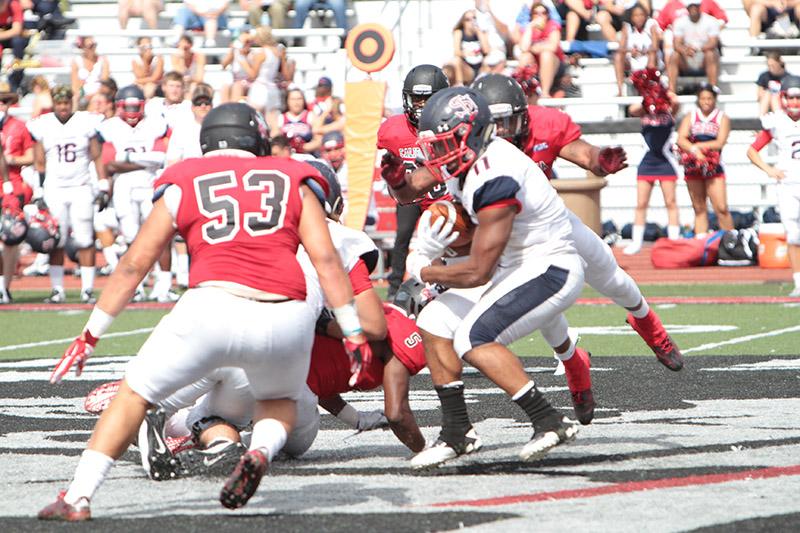 The California University of Pennsylvania Vulcan football team came into Saturday’s contest looking for a bounce back win. Losing their last game in a heartbreaker definitely did not crush their spirits, and it was clear from the beginning that they were hungry.

To open up the first drive, it seemed as though Shippensburg would get the ball right back, when sophomore Luke Smorey appeared to lose control of the football on the first play of the game. After reviewing the play on the field, it was overturned and the Vulcans went to work. Driving the length of the field in only four minutes, sophomore John Franklin III put his shoulder down and scored from two yards out. The defense forced a three-and-out and it was time for the offense to make yet another statement. A missed field goal led to Shippensburg snaking 80 yards down the field 17 plays later, to score a two-yard touchdown.

The score was tied 7-7 going into the 2nd quarter and the Vulcans defense fought strong, but gave up three points making the score 10-7. The Vulcans struck right back as they scored on a six-yard run up the middle. The Vulcans were not done yet either when they scored on a eight-yard pass from senior James Harris on the next drive to make it 20-10. Nearly four minutes later, the Vulcans were firing on all cylinders again when Harris rifled a 32-yard pass into the awaiting arms of Smorey. Then finally on the last play of the 2nd quarter, junior Aaron Terry won himself the PSAC Western Division Special Teams AOTW honors with an unbelievable 97-yd punt return for a touchdown.

The second half opened with a score of 34-10 with the Vulcans in the lead. With a comeback in mind, the Red Raiders looked to score on their opening drive but then was stopped by a host of defenders including senior Harrison Reid and redshirt freshman Dymond Thomas. When Cal got the ball back, a three-and-out forced them to punt, back for Shippensburg was Sheldon Mayer. A lapse in coverage allowed Mayer to bring it back 82 yards making the score 34-16. Shippensburg then sent out the offense again to go for the two, but was stopped. Being 18 points down with another quarter left seemed like a daunting task for Cal, but Coach Keller had faith in his team. A three yard touch pass from Ryan Zapoticky gave the Raiders a better chance as the quarter came to a close.

When the fourth quarter opened up, the Raiders were driving. Shippensburg went 83 yards down the field and managed to only get three points after the defense held strong. Vulcan fans were now getting a little anxious being that they have not scored a single point since the long punt return to close the second quarter. After another three-and-out from the California offense, Ship had the game in their hands. Rolling out of the pocket with 1:23 left in the game, Zapoticky tries to squeeze a ball into his receiver’s hands.

A big time interception along the California sideline from Aaron Terry helped Cal seal the deal and improve to 2-1.
James Harris and the valiant Vulcans stuck with the Raiders with not only their offensive efficiency but the defense as well. Holding Shippensburg to a season low rushing yards and a single interception allowed Cal’s offense to shine.

California will travel to Edinboro this week to take on the Fighting Scots who are looking for their first win of the season. The Scots have not defeated the Vulcans since 2004 and Cal looks to improve to 3-1 this season with kickoff set for noon.