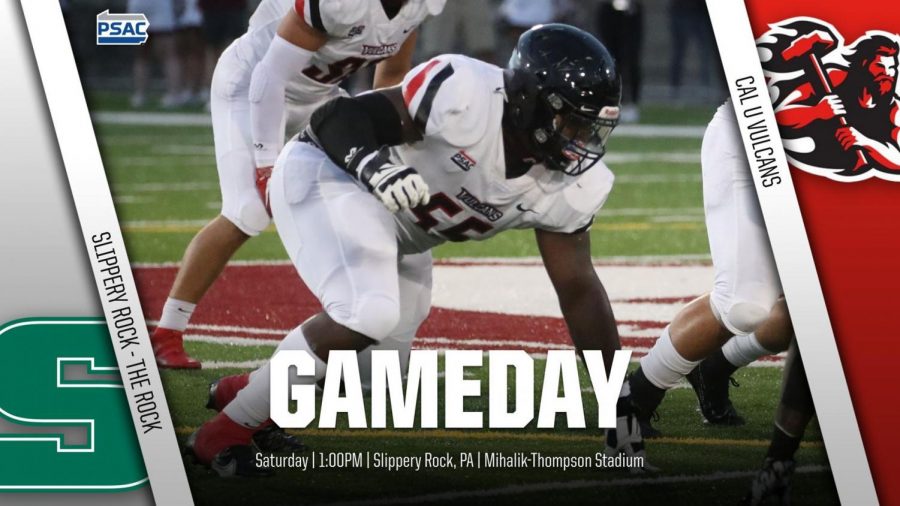 COVID-19 FAN INFORMATION
• Fans should not attend any events if you are experiencing any COVID-19 symptoms or feeling ill.
• Masks are REQUIRED inside all buildings on the SRU campus, regardless of vaccination status.
• Fans are encouraged, but not currently required, to wear masks at SRU outdoor events.
• Fans are encouraged to social distance when possible at events.

PARKING
• Parking is available in the lots surrounding the stadium
• Parking spaces are $10 in all tailgating lots ($25 for motorhomes, large vehicles)
• Shuttles will circle the parking lots to assist with transportation to the gates
• Campus Map | Stadium is #52 on Map

NOTES
• Cal U closes out PSAC West play on Saturday by traveling to face Slippery Rock. The Vulcans posted a 42-14 victory against Seton Hill last week after scoring 28 points in the first quarter. Meanwhile, The Rock cruised to a 63-21 win at Gannon behind eight passing touchdowns.

• The Rock has won seven of the last nine meetings in the series after the Vulcans won five-straight games from 2006-10. Additionally, Cal U has lost the last five meetings at Mihalik-Thompson Stadium, as its last road win was in 2010.

• After spending two decades as an assistant with the program, Shawn Lutz has posted a 47-12 record in six seasons as head coach of The Rock. He led the program to an appearance in the semifinals of the NCAA Playoffs in 2019 after winning the program’s first PSAC Championship in four years. Lutz was chosen the PSAC West Coach of the Year in each of the last two seasons.

• Slippery Rock once again features one of the most prolific offenses in the country, ranking among the top 10 in scoring, total yards and passing yards. The Rock made a switch at quarterback to North Dakota transfer Noah Grover last week and he set a single-game school record with eight touchdown passes against Gannon. He finished with 439 passing yards on 32-of-40 attempts after entering the game with just 32 pass attempts this year. Slippery Rock boasts a dynamic trio of wide receivers led by senior Henry Litwin. An All-American in 2019, Litwin leads the PSAC with 813 receiving yards and 11 total touchdowns this year. Fellow senior Jermaine Wynn, Jr. sits among the top 10 in the league with 596 receiving yards, plus ranks fourth in the PSAC with 127.25 all-purpose yards per game. The Rock also debuted a new starter at running back last week in Portland State transfer Evyn Holtz, who posted 109 rushing yards on 18 carries. Slippery Rock also sits among the top 10 in the country in total defense, allowing just over 250 yards per game. Senior Tim Vernick leads the team with 59 tackles and enters the week with nearly 250 stops in his career. Classmate Garrett de Bien paces the team with 11.5 TFL in his second year as a starter, while fellow senior Chad Kuhn has registered a team-leading 7.0 sacks after being a 2019 AP All-American. The Rock boasts a pair of explosive returners in Wynn and senior Cinque Sweeting with Wynn ranking second in the league with 12.4 yards per punt return.

• The latest Super Region One rankings were released on Monday and the top-six teams remain unchanged from last week. This weekend features a pair of regionally-ranked match-ups with top-ranked and undefeated Bentley traveling to sixth-ranked New Haven in the NE-10. Cal U and Slippery Rock are also both positioned in the rankings.

• Cal U again moved up in the AFCA Top 25 poll this week, as it now sits at No. 3 with 668 points. The Vulcans have matched their highest-ever position in the poll previously set on Oct. 18, 2010 after they posted a Homecoming win over Slippery Rock. Cal U has vaulted in the rankings after debuting in the poll at No. 25 five weeks ago and is one of four remaining undefeated teams in the country.

• Junior Jermal Martin, Jr. was named the PSAC West Defensive Athlete of the Week for the third-straight game on Monday. He posted seven tackles and a 27-yard interception return for a touchdown in the victory over Seton Hill. Martin is the first player since 2018 to post an interception in three-straight games, plus became the first Cal U defensive player since 2014 to earn the weekly league laurel three times in a season.

• Cal U offensive lineman Eric Hudanick and Slippery Rock wide receiver Henry Litwin were two of only 15 players in NCAA Division II to be announced as semifinalists for the 2021 William V. Campbell Trophy, which recognizes the absolute best football scholar-athlete in the nation. Hudanick and Litwin were both also selected CoSIDA Academic All-Americans in the spring.

• Last week, junior defensive lineman Gerald Brown collected eight stops in the win over Seton Hill. He has now registered a combined 17 tackles the past two weeks after totaling 11 stops in the previous four games. Brown was a consensus all-region selection in the 2019 campaign after ranking among the top five in the PSAC with 16.5 TFL and 8.0 sacks, plus led the team in tackles.

• Junior wide receiver Derek Lockhart posted three receiving touchdowns, including two in the first quarter, against Seton Hill. He eclipsed the century mark for a consecutive week, finishing with 135 receiving yards on a career-high 10 catches. Lockhart has totaled 24 receptions for 380 yards and six touchdowns over his last three games. The South Allegheny product entered the season with only three career catches.

• Last week, the Vulcans surrendered over 100 yards to a running back for the first time since Week 9 of the 2018 campaign (Wes Hills, Slippery Rock). Seton Hill senior Logan Wiland, who leads the PSAC in rushing this year, finished with 166 rushing yards on 33 carries in the loss. Cal U still ranks seventh in NCAA Division II this season in rushing defense, allowing just 78.8 rushing yards per game.

• Sophomore linebacker Noah Dillow led the team with 12 tackles and also added 1.5 TFL last week against Seton Hill. It marked the second time this year in which he has recorded double-digit stops after totaling a career-high 13 in the season-opener. Dillow leads the team with 59 tackles this fall, which equals his total from the 2019 campaign, and sits among the top 15 in the PSAC with 7.5 tackles per game.

• Last weekend, senior Tyson Hill moved into second place all-time in school history in both receptions and receiving yards. He trails only Garry Brown in both categories while totaling 167 catches for 2,661 yards in his career. A two-time, All-PSAC West First-Team selection, Hill ranks fourth in the league this season with 674 receiving yards and 5.5 receptions per game.
• Cal U leads the league and ranks among the top 10 in the country in allowing opponents to convert just 26.9 percent on third downs. The Vulcans have allowed only one opponent this year to convert more than five first downs. Meanwhile, Slippery Rock sits second in the PSAC by converting 51.7 percent on third downs.

• Sophomore wide receiver JaQuae Jackson scored a pair of touchdowns and finished with 121 receiving yards against Seton Hill last week. He has caught multiple touchdowns three times this year and has eclipsed the century mark in receiving yards twice. A first-year starter, Jackson ranks fourth in the PSAC with eight receiving touchdowns and sits second with 6.4 receptions per game.