“Wild” finish in the Frontier League

The winner takes all in Game 5 of the Frontier League Championship. 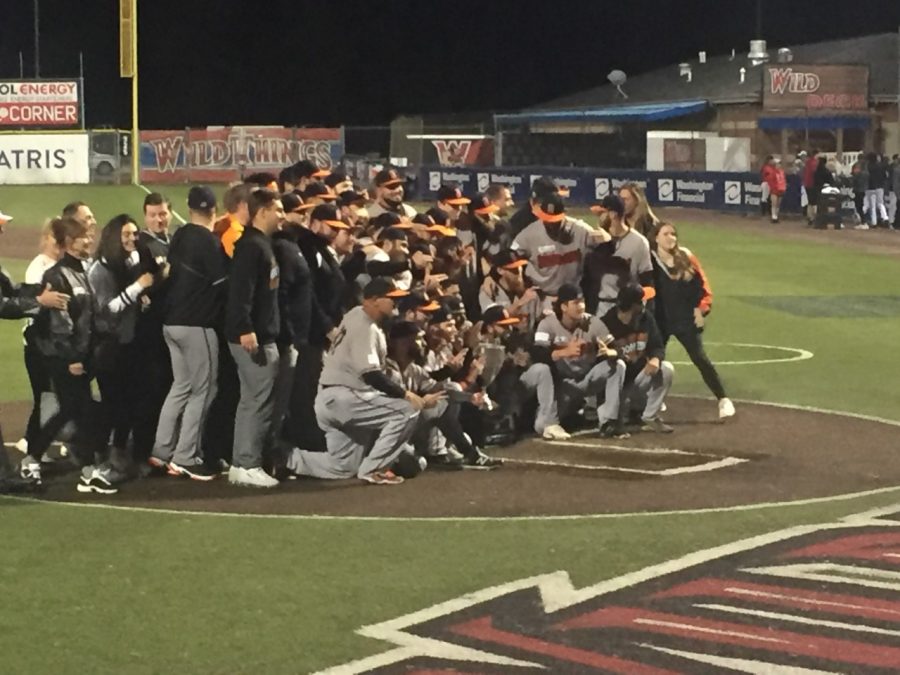 The fall season has just begun, and the air is getting a little cooler in the evening. However, some of the boys of summer had some baseball left to play. In Washington, Pennsylvania, the “Schaumburg Boomers” and the host “Washington Wild Things” were going to do just that in the “Frontier League.” There would be no tomorrow winner takes all in Game 5 of the Frontier League Championship.

For the “Boomers” it was a long ride to get there and not just travel time for the team and the many fans that made the 9 1/2-hour trip.

The “Boomers” got off to a good start going 17-12 to start the season, hit a rough road in July and August going 12-12-1 for July and 8-15 for August. The final two weeks of the regular season had a record of 37-39-1.  The “Boomers” went 7 of 12 to just squeak into the division lead to win the Central Division and get into the final playoffs spot and would have to play on the road for most of their playoff series.

Getting swept by Florence and the but would catch fire going 56-40 for a decisive division win. Lead by Triston Petterson and Andrew Czech two of the big bats of the lineup and complementing them on the mound would be pitchers Ryan Hennen and Daren Osby. Osby lead the team in strikeouts and Hennen was the team leader in wins.

After the playoff bracket was set the Wild Things would play host to the Équipe Québec while the Boomers would have to go on the road to take on the Florence Y’alls. The Wild Things would trail 2-1 and were on the brink of elimination but came home to a great Washington crowd and would take the next two games from the Équipes and punch their ticket to the Frontier League Championship 3-2. Meanwhile in Schaumburg the Boomers would split the two games in Windtrust Field would travel to Florence and take the series 3-1 and would be waiting for Washington at Windtrust.

The Boomers would take game one, but Washington had seen this before in the last match up. The Wild Things would come back to win the last game of the season in Windtrust Field and would take the momentum heading to Wild Things Park.

The Wild Things would win game three and go up 2-1. The Boomers got a spark in game four. Lead by Designated Hitter Quincy Nieporte and Pitcher Erik Martinez would get things going for the team. The Boomers took the fourth game 3-1, tying the series at 2-2. This set up a wild and decisive game five on Sunday afternoon.

On a warm September Sunday afternoon while most people were watching the NFL Football and NHL Preseason hockey, and a good number of the Wild Thing faithful were in attendance over 1700 fans were there.  The Boomers opened the scoring with a three-run home run from Nieporte that soured out of WTP into the parking lot. This would get the ball rolling for the Boomers and they wouldn’t look back with Kyle Arjona going the distance going 9 Innings, 3 strikeouts, giving up 3 runs on 104 pitches.

The Wild Things struggled to get offense rolling this game getting base runner in scoring position but could not get them around to score. As they left 5 runners on base, The Boomers would take on three more home runs and add on to their score as they would take a 10-1 lead into the 9th inning. The Wild Things would start to rally in the bottom of the inning as they started by getting a walk hit batter and bloop single that would lead to a double and would score two runs late.

With two runners in scoring position and two outs, getting a hit this would make a new ball game or put it away for the Boomers. With a rocket shot to short quick flip to second for the last out, the Boomers would clinch their fourth FLCS Title. The Boomers would celebrate on the mound with Arjona. This would be the first FLCS Championship since 2019 (due to cancelation of the 2020 season due to COVID-19) that the championship trophy was handed out. Arjorna was named playoffs MVP winning both games that he started in the finals.

The Wild Things faithful stood by their team as they watched the celebration begin. And they congratulated them for the team getting as far as they did. Till next May the Frontier League put on quite the show for the 2021 campaign and the fans of Washington look for the Wild Things to get back to the FLCS and the Boomers look to go back-to-back next year. But congratulations to both teams for the great ending of the year. And I look forward to watching both teams next year.