Cal U Integration name reveal through the eyes of the students

Cal U makes a big change to its name due to the merger with other universities. 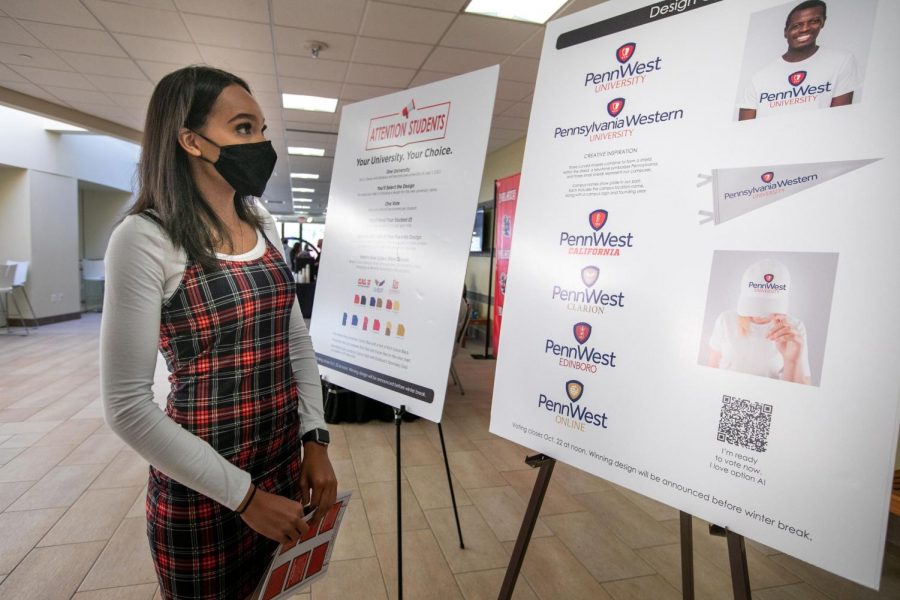 Cal U student Destiny Brooks looks at the display of proposed logos of Pennsylvania Western University, the integrated university of California, Clarion and Edinboro, Oct. 19, 2021.

With years of history integrated within its walls, California University of Pennsylvania will be known by another name next fall. Cal U, Edinboro and Clarion will combine effective July 2022. It’ll be called Pennsylvania Western University, or Penn West, for short.

The integration and name reveal on Oct. 14 brought out concern and questions from many individuals. Non-seniors, juniors, sophomores, and freshmen on campus now wonder whether their diploma will state California University of Pennsylvania or Penn West since they came to Cal U when it was still Cal U. Other students in different years wonder how our campus will change with the integration, but one thing is certain, we will never let our school spirit change, it will just expand.

Christian Huey, a freshman majoring in Business Administration said, “if anything, I feel we as students already in attendance should be able to receive California University of Pennsylvania on our diploma with the students starting next year being the first to graduate with Penn West on their diploma. I would love to see this happen.”

Sophomore Darrek Harshberger, who is majoring in Secondary Education Mathematics stated, “I think that the name is good! I believe that the schools did intensive research. I saw the report during Dr. Dale’s meet and it was very extensive and there was clearly a lot of thought and data used.”

Emily Versino, a freshman majoring in Middle-Level Education did not like the name change as she stated, “I think this will impact CalU because they are going to be thought of as all 3 colleges together and not just CalU. It impacted me because the college I paid to go to now has a different name and I am not a fan.”

Skyler Kapuschinsky, a junior majoring in English with Creative Writing said, “a part of me was curious as to if the town of California had any say in this and were aware of the name change. I could imagine that the town would be a little upset that the college that shared its name and put the town on the map would be changed and there would be no more clear indication of the town.”

Taylor Blair, a freshman in  Mechatronics Engineering Technology major, were looking forward to the name reveal. Blair stated, “I was excited to see what the new name would be, along with the logo.” He also mentioned, “When I saw the name for the first time, I was relieved to see that it was straightforward and simple, and not something such as a complicated acronym. I would have liked a name more unique to the 3 colleges, but overall, I am satisfied with the result.”

Jordan Spisak, a junior majoring in Secondary Education Mathematics, when asked what his immediate response was to the name reveal he stated, “It’s bland and does not have character. I like new things, but not all new things are good.” Spisak also stated, “I understand that the colleges have to merge, but I wish each could maintain their respective name as much as possible. I want my diploma to say that I went to the prestigious CalU and not the generic PennWest.”

Once a Vulcan, always a Vulcan. Cal U students are encouraged to reach out if they have questions about the integration process and should be on the lookout for sessions with more information. As Cal U prepares to turn a new page in the University’s history, Penn West will be another chapter in Cal U’s history.