An Abstract Exhibition by Wade Wohler

Manderino Library hosts an exhibit of abstract art by one of Cal U’s own. 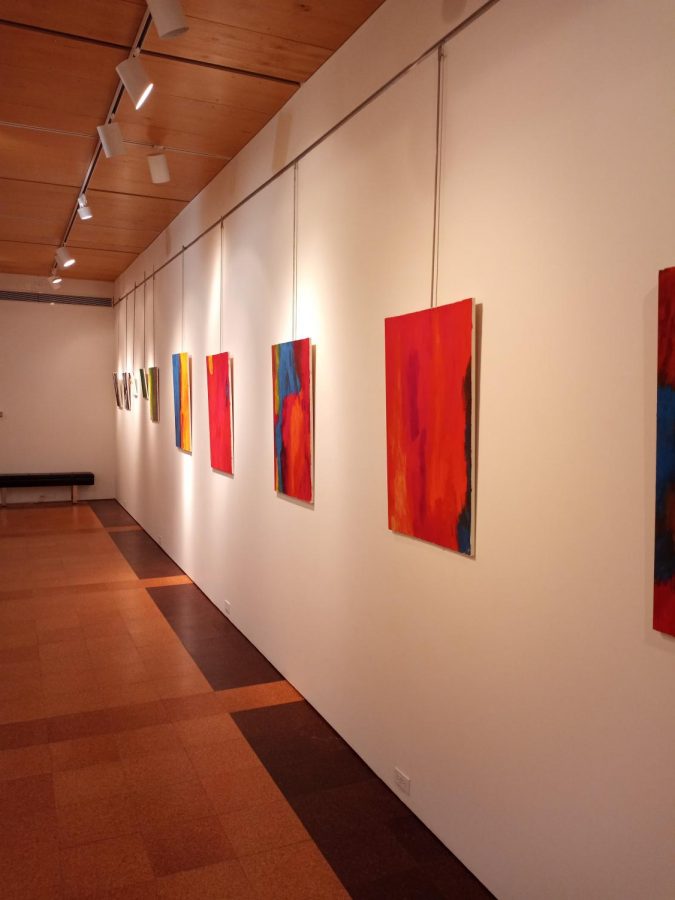 Sept.19 on the third-floor gallery of Manderino Library at Cal U, a showcase of art was placed on display for all experience, titled World of Wade. All of the work presented is done by Wade Wohler, son of Anthony S. Pyzdrowski. Pyzdrowski is a professor for the Information Systems and Engineering Technology Department at California University of Pennsylvania.

The show was postponed for two years due to the pandemic. Each of Wohler’s pieces were done as an oil painting in the style of abstract expressionism.

Pyzdrowski arranged the gallery through the library, with help of Todd Pinkham to organize the show, as well as hang the paintings. Pinkham is an Associate Professor for the Department of Humanities at Cal U. Pinkham has been a participant in Pennsylvania’s art community for many years. Between 1994-2002, he was art director of Dargate Auction Galleries in Pittsburgh.

“This is where I marketed and sold more than $2 million worth of paintings”, said Pinkham.

He created a mural for the invitational event of Donora’s 60 Year Anniversary Smog Event. Pinkham is also a member of the Associated Artists of Pittsburgh, where his own works have also been displayed in art-shows and auctions.

His focus is on the liberal arts, many of his courses range from both beginning and advanced painting and drawing to digital arts media.

“I have been working with Wade for many years at Cal U where he audits my class,” Pinkham said, “The color and texture in the work defines it, but his drive to make it strikes me the most.

The exhibit was open during library hours and ran through the week until Sunday. Wade has done art shows previous to this one.

The Manderino Gallery is commonly used for Thesis shows and other exhibitions from the student body.

The introductory statement to the World of Wade presents Wade’s oil paintings as a means of communicating his thoughts and feelings to the world through primary colors and layering to craft intriguing textures. The passage then continues with his method of painting by “dabbing” along with “primarily vertical directional strokes.” It concludes with speaking on Wade’s hope of sharing his outlook of the world through “the artistic medium of oils.”

“He did a great job and I hope he continues painting,” Pinkham said.