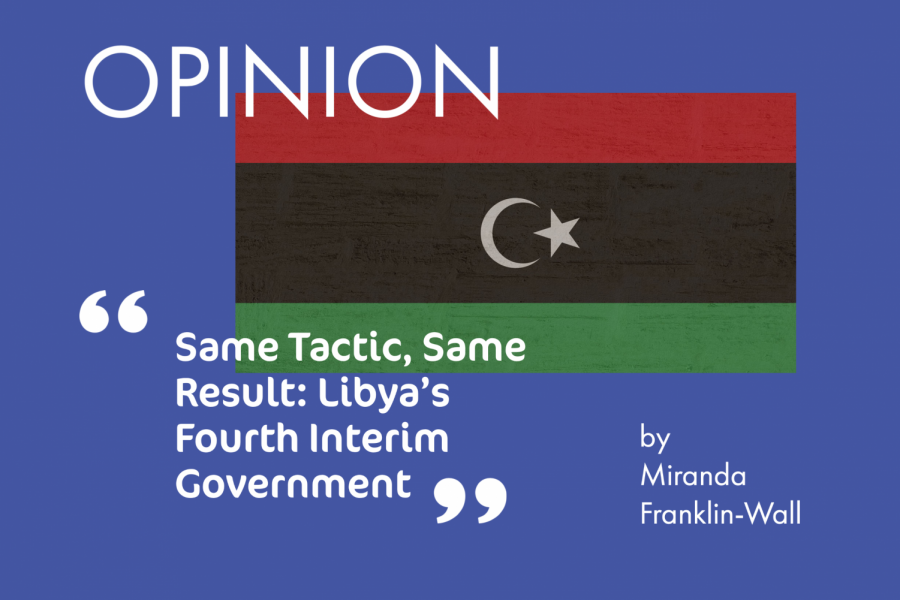 On February 5th,  the United Nations (UN) sponsored elections for the fourth interim government in Libya since Qadhafi’s dethronement and it is unclear what makes this time different. In fact, evidence suggests that the elections will only lead to a reiteration of the status quo.

Libya has been embroiled in nearly continuous conflict since the Arab Spring in 2011. Armed militias vied for power, and politicians were divided along ideological and geographical lines. Despite the UN’s best efforts at unity, today the elected House of Representatives (HoR) gathers in the eastern city of Tobruk, while the UN-sponsored interim presidency council, or Government of National Accord, resides in the western city of Tripoli. Both governments operate parallel institutions and militaries. Moreover, aggressions made by each government’s military, fueled by foreign fighters and weapons, have had a huge cost to civilians and birthed a breeding ground for terrorism.

In opening remarks to the Libyan Political Dialogue Forum (LPDF), Stephanie Williams, Acting Special Representative of the Secretary-General for Libya, remarked, “This project is not about power sharing,” but about embracing the responsibility to hold elections in December that will lead to a stable government above personal interests. However, it is doubtful that Libya’s leaders will rise above personal interests.

The losers of the election, including Aguila Saleh, Parliament speaker for the HoR, must relinquish power. However, in order to accept the new government, Saleh wants his nephew to hold a ministerial seat.

Additionally, Saleh has vied for parliament to remain in Tobruk (in the east), rather than holding the next session in Sabratha (in the west) as previously discussed. Similar disagreements as to whether the government should be centered in the east or the west led to the current political climate and division between governments.

There are also no guarantees that the HoR will approve the newly elected executive authority. The HoR voted to reject the last UN-backed interim government in 2016, which stoked the conflict further.

Another possible spoiler is Libyan National Army (LNA) leader, Khalifa Haftar. After announcing his acceptance of a “popular mandate” to rule Libya in 2020, despite never being elected, fears surfaced that Haftar aimed to fill Qadhafi’s role as military dictator. Though Haftar has since lost much of his political clout, Haftar’s vocal support for the new interim government, as well as the elected official’s rapport with the renegade leader, suggest Haftar has not lost his ambition. Unofficial reports state that Abdelhamid al-Dbeibah, the new interim Prime Minister, visited Benghazi – the center of Haftar’s power base – days before the vote and Mohammed al-Menfi, the new head of the Presidential Council, conspicuously met with Haftar in Benghazi after the elections.

Moreover, LNA representatives voted for the Dbeibah-Menfi list rather than Saleh’s list, even though the HoR first gave Haftar and his LNA legitimacy by promoting him to Field Marshal. Though some view the union between the new government and Haftar’s LNA favorably because the new government will likely avoid rejection by east Libya loyalists in the HoR, it also signals that the new leaders of Libya do not espouse democratic values.

There is a chance that Saleh, Haftar, or the newly elected leaders will delay elections to ensure they stay in power. Even if elections are held, it is likely that they will remain in power by proxy. Despite the UN’s efforts, Libya will not achieve stability until its leaders commit to peaceful transfer of power, as well as free, fair, and regularly scheduled elections.

Therefore, the international community must hold all spoilers accountable, such as investigating the allegations of election bribery and banning all participants in the scheme from the election process. The UN can also ensure that there is an adequate system of checks and balances in place to prevent derailment of the December election. Lastly, it is up to the Libyan leaders themselves to adopt democratic values, even if it means relinquishing power. If this does not happen in the next 10 months, Libyans are doomed to the same fate as the fallouts from the previous interim governments.

Miranda Franklin-Wall holds a Master’s in Conflict Studies from Tel Aviv University where she was inspired to study Arabic in order to dig deeper into the Middle East’s conflagrations. She studies Arabic at California University of Pennsylvania and recently gave a lecture on Libya at City College of San Francisco. The views expressed in this article are those of the author and not necessarily those of the U.S. Government.