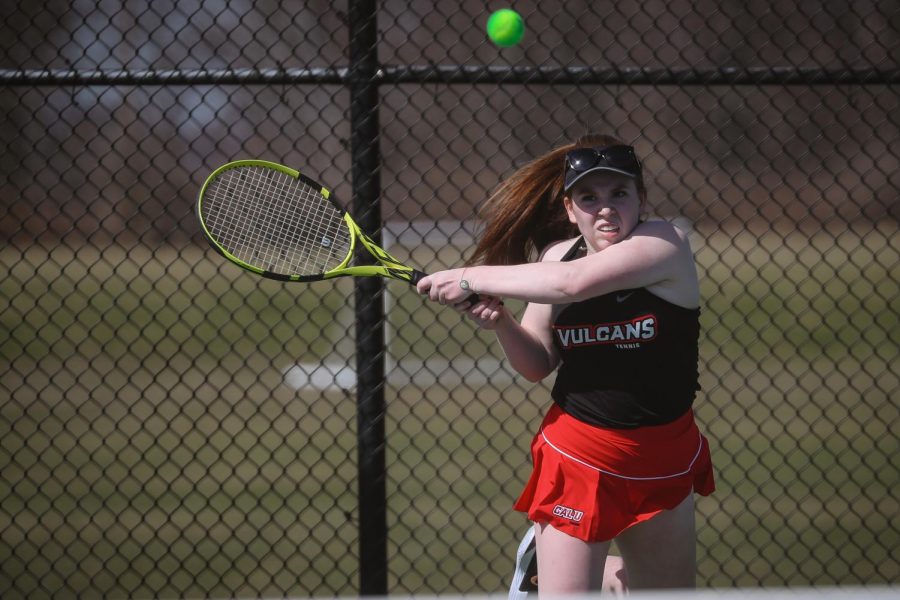 Kylie Feltenberger, a freshman from Franklin, Pa., competing in the Cal U tennis match vs. Fairmont State, California, Pa., March 20, 2021

In its initial home match of the spring, the California University of Pennsylvania tennis team suffered a 7-0 loss versus Fairmont State on Saturday afternoon, March 20, 2021, at Roadman Park.

With the loss, the Vulcans sit at 0-2 this spring after playing a pair of matches against Mountain East Conference (MEC) opponents. Cal U was playing its first home match in 693 days, as it last played at Roadman Park on April 27, 2019. Meanwhile, the Fighting Falcons improve to 2-1 this season with their lone loss being against Mercyhurst – the 2019 Pennsylvania State Athletic Conference (PSAC) Champion.

The Fighting Falcons completed the match victory at Roadman Park by claiming all six singles matches. Vargas suffered a 6-1, 6-0 loss against Matos at the first position and Winseck fell by a 6-1, 6-4 margin at second singles to Sevilla. Gallagher dropped a 6-2, 6-3 contest against Sorton at the third slot, while Duran was outlasted by a 6-7 (3-7), 6-2, 10-7 margin at fourth singles against Edeburn. Feltenberger suffered a 6-1, 6-0 loss versus Sprout at the fifth slot and junior Julia McDaniel (South Park, Pa./South Park) was blanked by a 6-0, 6-0 count by Nguyen at the sixth position.

Cal U returns to action on Saturday, March 27, when it opens PSAC West play against Mercyhurst at the Westwood Racquet Club in Erie, Pennsylvania.