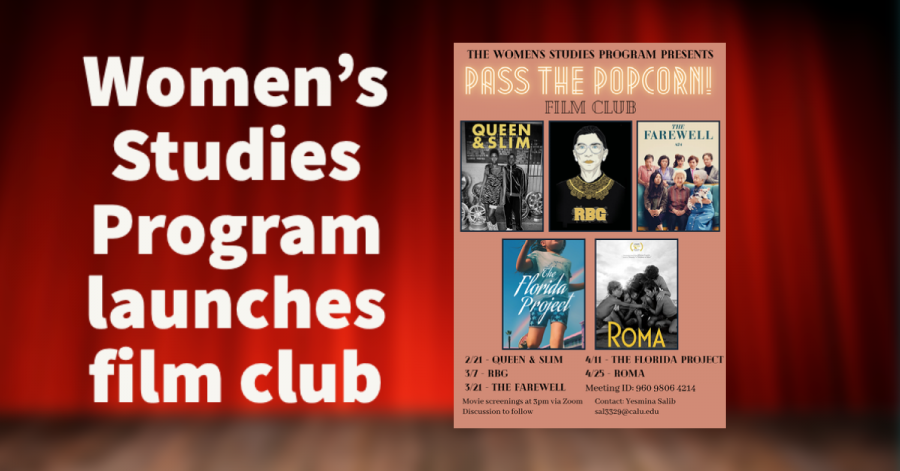 “I ask no favor for my sex, all I ask of our brethren is that they take their feet off our necks.”

This movie is the second in “Pass the Popcorn,” a film club/series in which students, faculty and staff are invited to watch films dealing with social justice issues and then participate in a discussion following the viewing via Zoom.

Inspired by the rise of anti-racist book clubs, graduate student Yesmina Salib organized and facilitates “Pass the Popcorn” as part of her Master of Social Work practicum with the women’s studies department.

Salib said that she had wanted to do something that let people talk about social justice issues through a medium that was not too overwhelming or intimidating, but comfortable and accessible.

In selecting the movies, Salib said she and Marta McClintock-Comeaux, director of the women’s studies program, looked at many different indicators and specifications.

“Originally, I was trying to think of movies that either I had seen, or I had heard of… that focused on stories or topics that we don’t typically see in movies or maybe had a cast that we didn’t typically see,” Salib said.

Salib also said that she looked for movies that pass the Bechdel test, are available on streaming services and center around untold stories.

During February, “Pass the Popcorn” celebrated Black History Month by showing Queen & Slim. After all the movies, Salib will guide a discussion with questions based around issues explored in the film. Background information about the movies, the filmmaker’s idea behind the movie, what went on as it was being made, intentions for certain scenes, is also presented for context and further discussion.

Junior psychology major Levon Williams-Hughes has attended the past two viewing sessions upon learning about the series from the university’s daily announcements. He enjoys the discussions as he gains a new perspective.

“It makes me think,” Williams-Hughes said. “Having these conversations is really progressive. That’s the keyword there: progressive.”

“I think it’s good to have a people with different life experiences when you’re having these discussions then you’ll be introduced to a new perspective and a new way of thinking about things,” Salib said. “I want to thank everyone who came to the first screening and I hope that people come to future screenings because I people to feel like it’s welcoming and not intimidating.”

March is featuring RBG and The Farewell as part of Cal U’s Women’s History Month: Breaking Barriers series of events.

Noah Bernading, a freshman phycology student, heard about “Pass the Popcorn” through McClintock-Comeaux’s Intro to Women Studies course. He said he had been meaning to watch RBG but never had the time, so the film series presented the perfect opportunity.

“I thought it was good,” Bernading said. “I didn’t know a lot about [RBG] but it was pretty cool to learn about her cases and her past and how she grew up.”

He also said he enjoyed the discussion that followed.

“We touched on things that happened in the movie and more of the political stuff that is happening right now and what’s happening today,” he said.

According to Bernading, his biggest takeaway was the lesson that one can be friends with people who have different political views than their own, referencing RBG’s friendship with former justice Antonin Scalia.

This week, “Pass the Popcorn” will stream The Farewell, a film written and directed Lulu Wang and stars Awkwafina, Tzi Ma, Diana Lin and Zhao Schuzhen.

“The Farewell I think it is also important to focus on stories about women with women at the center of them,” Salib said. “I think it is important for us to just try and hear as many different stories as we can.”

Viewers can expect The Florida Project and Roma in April.

“I’m excited for all these movies,” Salib said. “I think they bring something different. Each movie talks about different themes and different topics.

Some films that didn’t make the cut but still come highly recommended by Salib include Persepolis, XXY, One Night in Miami and Moonlight.

Salib said she hopes that just by seeing this list of movies, people will watch them on their own and think about them or have conversations with their friends and family. She said she believes the pandemic has allowed many to become more introspective, allowing them to think about systems or institutions in new ways.

“Having this time to think about what we want our future to look like and also how we get there, speaking to people within your community is a really key way to make these changes,” Sailb said. “I hope that this kind of generates some thought and adds that mindset that is happening now in COVID that there needs to be real changes to happen for us to move forward in a positive way and having these discussions is one small thing that we can do.”

Screenings begin at 3 p.m. every other Sunday. Viewers can also just attend the discussion which follows if they prefer.