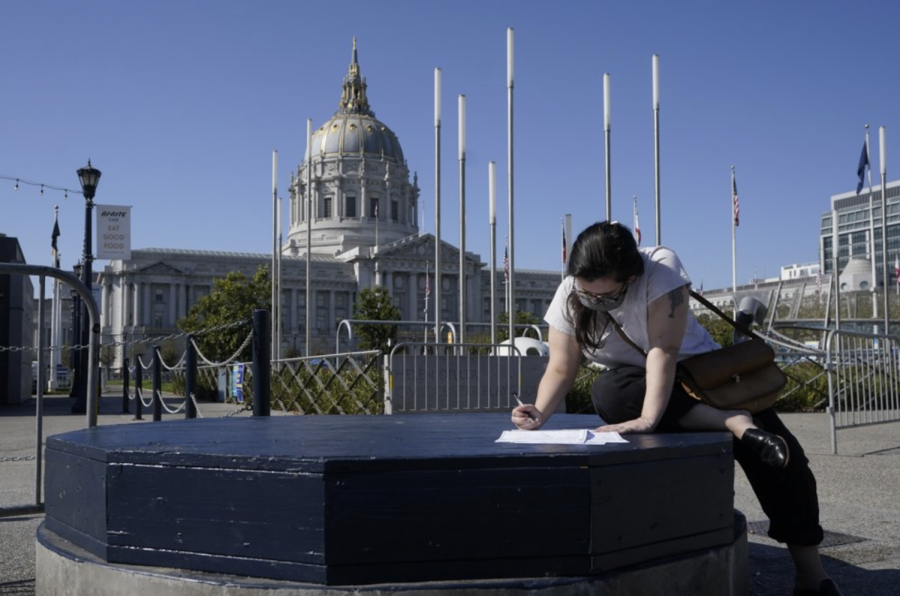 Andie Grossman fills out her ballot before delivering it to a San Francisco Department of Elections voting center in San Francisco, Sunday, Nov. 1, 2020.

On Tuesday, Nov. 3, millions of Americans across the country will vote in the 2020 presidential election. Among them will be a new generation of voters who are exercising their right to vote for the first time.

“It was very frustrating knowing that my birthday was less than 10 months shy of me being able to vote in the last presidential election,” said Peyton Zellie, 21, of Vestaburg, Pennsylvania.

Zellie plans to vote in person, locally, on the day of the election.

“My aunt once told me it wasn’t something I needed to concern myself with,” Zellie said. “I was 18 years old, yes, but the political future of my country should matter to me.”

Zellie said that voting is “an important topic amongst her family, but her friends don’t take it as importantly as they do.”

Zellie did, however, say that she is not hopeful for the election’s outcome.

“I think either way there will be unrest and discourse in the following weeks,” she said.

Michael Berdar, 19, a sophomore majoring in health science at California University of Pennsylvania, also plans to vote in person on election day.

“I do consider myself informed,” Berdar said. “But there have been many times when people have blown over my opinions because I’m ‘too young’ to be informed.”

“I feel it’s important to exercise my right to vote because I need to look out for myself and my community,” he said.

“As a member of the LGBTQ+ community, it’s extremely important to know who is going to protect my rights and freedoms and who wants to take them away.”

Of his friend group, Berdar said the majority plan to vote for the first time as well.

“Off the top of my head eight of them are,” he said.

“My political views align with my friends, but not so much with my family,” said Berdar. “I will say voter turnout among young voters seems to be up tenfold compared to the last election, and that is giving me a little hope.

“I think it’s important for me to exercise my right to vote,” said Hannah Harhai, 18, a freshman at the University of Pittsburgh. “To me, it’s one of the best ways that I can contribute to making the changes that I would like to see within our country and even my own community.”

“I feel as though older people probably think my political opinion counts less because I’m young and a first-time voter,” Harhai said.

“However, I think my opinion and vote, along with the rest of the younger generation, matters probably the most because we’re the ones coming up in the world and have the power to actually make a change.”

“Pretty much all of my friends and classmates are first-time voters,” Harhai said.

“My family has always encouraged me to use my right to vote,” she said. “I would also say voting is very important amongst my peers as well.”

Harhai plans to return home on Nov. 3 to vote locally with her family.

“I really get annoyed when people say that their vote doesn’t matter or that it wouldn’t count for anything,” Harhai said. “I just encourage everyone to exercise their right and to please go vote!”