To become more financially stable, the school system looks to let go of hundreds of teachers by the end of the year 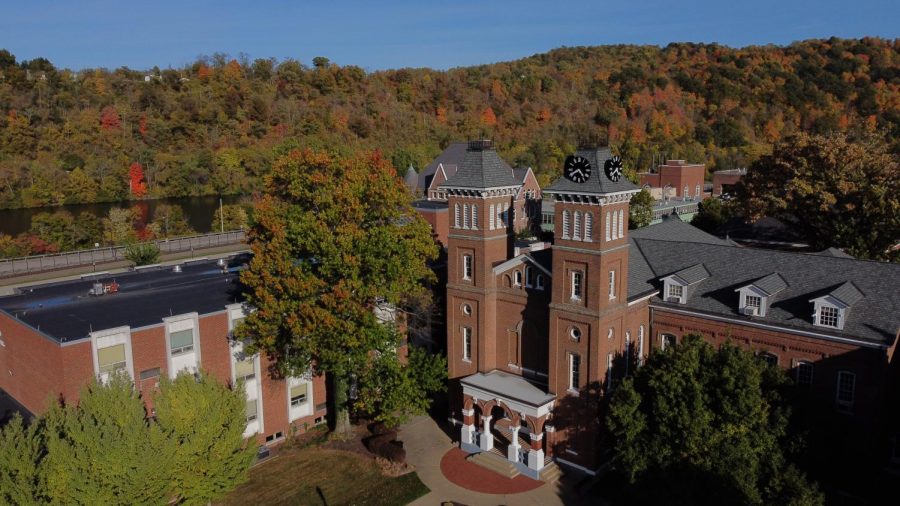 Aerial shot of the Cal U clock tower and Old Main

While faculty are working hard to help students learn virtually, at the same time many are worried over the constant threat of their jobs. This past June, around 85 Cal U faculty were projected to lose their jobs by the end of May 2021, said Jamie Martin, president of the faculty union.

Association of Pennsylvania State College and University Faculties (APSCUF) leaders, the union for faculty working at PASSHE, held a virtual student/journalist town hall on Sept. 30 to answer questions regarding faculty retrenchment, when an individual loses their job without cause.

Cal U is one of the 10 PASSHE schools that received letters of intent for faculty retrenchment in May. Other schools include Edinboro, Clarion, Indiana, Cheyney, Lockhaven and Mansfield. Martin explained how Edinboro was projected to retrench 80 faculty, Clarion 68 and Indiana up to 120. Bloomsburg, Kutztown and Millersville have all rescinded their letters since the announcement.

He is also aiming to match the student-to-faculty ratios of the academic 2010-2011 year which was the peak year for both enrollment and ratios. This would mean for every 21 students there is one faculty member. As of 2018, this number is down to 17 students per faculty member, said Sean Crampsie, PASSHE government relations director.

“By far [PASSHE] is the highest compared to our state-related and New York,” said Crampsie.

In fact, Cal U showcases its 17:1 student-to-faculty ratio on its admissions page to draw in prospective students with the promise of small classes and connections with professors.

Craig Smith, Cal U history, politics, society and law professor and APSCUF chapter president, said “the school’s basis for possible retrenchment is indefensible because there have been no distinct changes in university finances.”

“Last year, for example, the university had a total operating budget of $141 million, and it spent about $49 million of that on instruction, which includes faculty salaries and benefits,” he said. “Those figures are not that different from prior years.”

As requested by the chancellor, Cal U developed a plan for the upcoming five years that did not include possible retrenchment said Smith. Yet, this past April, PASSHE moved up the timeline forcing schools to demonstrate sustainability in two years.

According to Kelly Moran, Cal U chief of staff to the president, Cal U has not built its sustainability plan around an arbitrary ratio. Instead, the school is seeking to achieve a balanced budget for upcoming years.

“Like any university, or any business, in fact, Cal U must make adjustments from time to time in order to remain financially sound,” she said. “Decisions about personnel are one very important part of that planning, since personnel costs make up more than 70% of the university budget.”

“Cal U has taken many cost-saving steps over the past decade, including reducing the number of non-faculty staff,” said Moran. “Reducing the number of faculty members is one more option that the University must consider as it strives to achieve financial sustainability.”

Not only does retrenchment mean the loss of dedicated teachers, but it also means the possibility of growth in class sizes, decreased class availability, decreased enrollment and donors due to the loss of confidence in Cal U and the eradication of some departments and majors, according to both Martin and Smith.

“In APSCUF, we call the potential for retrenchment the ‘nuclear option,’” said Smith. “Not only should it be used as a last resort when all else has failed, but it causes widespread damage. As I’ve said before, retrenchment ruins schools.”

Tenured faculty members will be notified of the status of their job by the end of the month. Adjunct and probationary faculty would receive retrenchment letters following Oct. 30.

“If a faculty member receives a letter that they are going to be retrenched, it means that they would be done at the end of the academic year,” Martin said. “Seniority is involved, so for the most part you would have probably younger and newer faculty members at your universities who would be retrenched, first assuming that all of the courses could be taught in a given department.”

For now, faculty across the state remains in the dark.

“No one wants to hear they might lose their job, particularly in the middle of a global pandemic that has severely contracted the overall economy,” said Smith. “Faculty are understandably nervous and angry that the university would consider such a drastic measure when there are other ways to become financially sustainable.”

Resources for students who wish to help ‘save programs and jobs’ can be found at https://www.apscuf.org/students/#Retrenchmentstudents.

According to Smith, advocators should contact “the person who is ultimately responsible for this decision, the university president, Geraldine Jones.”

“She has the authority to carry out this threat, and she will be held accountable for it,” said Smith. “She alone can decide whether to rescind it.”