Cal U student athletes share their frustration about the canceled season 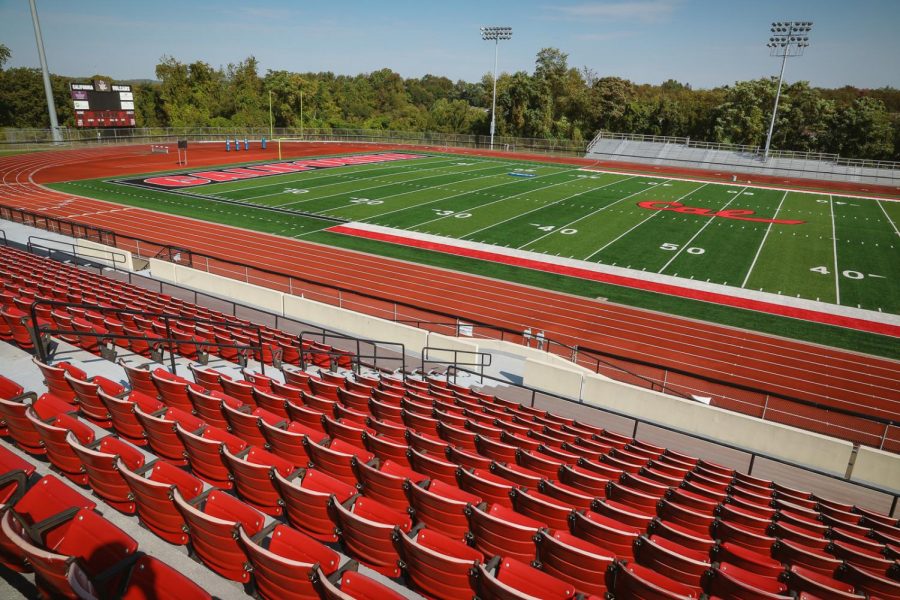 A view of the California University of Pennsylvania football field from the seats at Adamson Stadium, California, Pa., Wednesday, Oct. 7, 2020.

Megan Milijus, a member of the Cal U women’s swim team, is one of hundreds of student athletes affected by the cancellation of fall semester sports due to the ongoing coronavirus pandemic. Milijus was upset about hearing the news of Cal U remaining closed for the fall semester and sports being canceled because she could not experience her freshman year of college. “My heart sank when I read the email,” said Milijus, “I felt like my whole plan changed and I was terribly upset to know I had to stay home for the semester.”

This news seemed upsetting for those who are involved with the various sports teams on campus and left them wondering what to do now and what to expect for the future.

“The decision was something I felt was coming, but when it actually happened, I still couldn’t believe it,” said Callie Hampson, another member of the Cal U women’s swim team. Hampson said even though she and her teammates are unable to be together for this semester, they are hopeful on safely returning to campus for the spring semester and that sports will resume play.

Other swim team members Emily Bednar, Abbie Reichelderfer, and Riley Roldan know it will be unusual not to see their teammates every day.

“Being in the pool would be a stress relief for me on days I needed it,” said Bednar, “My teammates are some of the strongest people I have met and I am grateful for them.”  Reichelderfer compares her fellow teammates to a second family. “My team is a very close group of girls that rely on each other for so much and that void without being together is hard to fill,” said Reichelderfer.

According to the head women’s swim coach, April Gitzen, the swim team is still meeting virtually for the fall semester. The team is still staying in touch with another via various Zoom meeting calls and group chats. Even though the team is unable to meet face-to-face, they are still getting work done. The team is using a smart phone app where they are given workouts to do and follow since access to a swimming pool can be difficult for some. “The app focuses more on bodyweight workouts since everyone’s access to a pool still varies,” said Hampson.

The Cal U football team is also experiencing difficulties with not being able to play this season. Noah Mitchell is a quarterback on the football team and was upset when he read the email because of how much hard work the team prepared for to have a great season this fall.

Gabe Miller, a linebacker on the football team, is another student athlete dealing with the frustration. Miller said he had mixed emotions when the email was initially sent out. “I was originally very frustrated. I, along with all my teammates, put in a ton of summer work to get ready for this season, therefore, it almost felt like it was for nothing. After putting a lot of thought to the situation, I started to come to a realization that I am not the only one in this boat,” said Miller.

Another freshman athlete, Jacob Ardary, was upset knowing he would not be able to experience his first year of college and getting to know his teammates on the football team.

“The thing I will miss the most about not being able to play this semester is just being with my team and working hard together to win football games while having a good time,” said Ardary.

Head football coach Gary Dunn told all players to remain positive this semester, work hard in classes, and prepare to compete in the spring semester. Just like the swim team, the football team is also meeting virtually for the semester. Mitchell said the team meets via Zoom to stay in contact and motivate each other. The spring schedule for Vulcan football is currently being worked on, but the football team is definitely planning on competing in the spring.

Just like many other athletes, Ardary, Miller, and Mitchell are hopeful on returning safely to campus for the spring semester.

“I’m very hopeful on returning because football is everything to me,” said Mitchell. “To go two years without playing a game would be crazy.” Ardary will be unable to attend the spring season as he will be leaving for Army Basic Training and will not be back in time for the spring season. “I had a ship out date planned around playing in the fall before covid happened, then after the news was announced we weren’t playing in the fall, my plans got twisted up a bit,” said Ardary.

“I am extremely hopeful for returning to the most normalized semester that is possible in the spring. The University is extremely intelligent and precautious, with strong leaders paving the way. I am confident they will lead us in the right direction and make decisions that are ultimately in our highest favor,” said Miller.

“I miss just playing, having fun, and being around my teammates,” said Herrington. Remaining hopeful on returning to campus next semester, Herrington said the women’s basketball team will still hold a season, however, it will be a shorter season than usual. “I think the cancellation of fall sports will make student athletes more responsible,” said Herrington.

Just like other sports teams, the volleyball team is meeting virtually throughout the semester, although plans for the spring semester remain uncertain at this time.

“Although it was upsetting, I believe it was necessary given the current situation. Anything we can do to slow the spread and protect ourselves and those around us is extremely important, even if it costs us our normal season,” said Gulakowski.

Along with other volleyball teammates, Gulakowski misses being in the gym to work out, practicing volleyball drills, and lifting. “Practicing and lifting with the team is so much fun,” said Gulakowski. “It is always the best part of my day.”

Lastly, student athlete Haley O’Brien plays defense on the women’s soccer team. O’Brien was devastated like many other athletes upon hearing the news. She realized it is tough to be online for the semester, but it was the best decision to keep everyone safe.

“Our team stays in contact and we talk about our future plans for the spring. We discuss the workouts we are doing now to prepare us for next semester when we are supposed to play,” said O’Brien. The soccer team is meeting virtually like other teams as well to stay connected and discuss future plans. O’Brien says the women’s soccer team is scheduled to compete in the spring, but like other sports teams, the season will be short.

O’Brien thinks some good things have resulted from sports being cancelled for the semester. “Although the cancelled season was very heartbreaking, I feel there has been some good out of it. Obviously, it’s unfortunate that we can’t meet as a team or meet the new incoming players, but I feel this has given us more time to work to help us prepare for the season,” said O’Brien.

The coronavirus pandemic has impacted many of those involved with Cal U sports, but the teams are focusing on future plans. Some sports teams do plan on competing in the spring and are hopeful things return to normal soon so student athletes can get back in the swing of things.