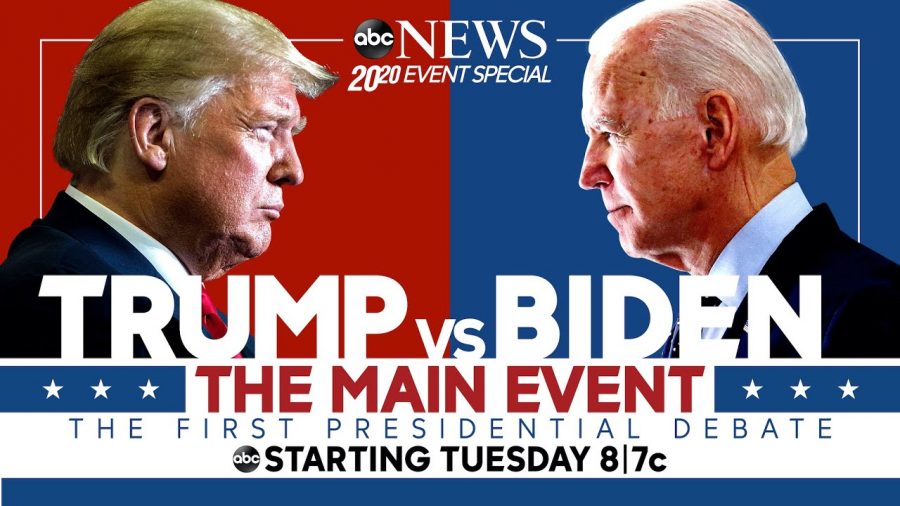 On Tuesday, September 29, 2020, President Donald Trump, the incumbent and Republican nominee, went head-to-head with Democratic nominee and former Vice President Joe Biden in the first presidential debate. Fox anchor Chris Wallace moderated the hour and a half long debate between the candidates.

The debate was fiery and chaotic right from the very beginning. The Biden and Trump campaigns agreed to the rules, allowing each candidate to have two uninterrupted minutes to answer the question posed, followed by a discussion period. This rule was seldom followed. Regardless of who was asked a question, Trump and Biden both consistently interrupted the other and attempted to talk over the other. At one point, Biden popularly asked Trump “Will you just shut up man,” reaching his breaking point very quickly with Trump’s constant interrupting. The two candidates sparred over healthcare, the economy, the coronavirus, the Supreme Court, and even Hunter Biden and his dealings with foreign governments.

At the end of the evening, I saw no winner in that debate other than maybe the third parties. Throughout the night, very little policy was actually discussed and neither candidate produced a clear vision as what four years under either would look like. The conduct and the decorum exhibited by the candidates was rather unpresidential and paints a grim picture of modern-day American politics. I also feel sympathy for moderator Chris Wallace who had to interrupt, talk over, and scold both Biden and Trump as they consistently interrupted each other throughout the night and talked over each other.

The Commission on Presidential Debates, the nonpartisan body that sponsors the presidential and vice presidential debates, also took note of the mass problems at the first debate and are reviewing and implementing new rules and procedures that the campaigns would have to agree to in order to participate, including giving the moderator the ability to cut the microphone of a candidate when it isn’t their turn to speak to prevent them from interrupting. I think this rule change would have been helpful at the debate, but I also think that unless there are strict parameters as to when the moderator can and cannot cut the microphone, I think it also has the potential to be used as a political weapon to help one side or the other. If the moderator personally has a preference between either of the candidates (which they certainly would), it is certainly possible that the moderator would cut the microphone of the candidate they preferred look bad and lose. I would also propose that the candidates not be on stage together, that they field questions independently and be given the opportunity to individually respond to the other’s responses independently. This sort of change would enable both candidates to lay out their policy goals and vision for their presidency uninterrupted by their opponent, and actually enable them to provide a contrast for the voters.

I think though that the biggest flaw in the debate was that once again, third party candidates were systematically excluded from the debate stage. To make the debate stage, candidates have to reach a certain polling threshold nationally (15%) and be on enough state ballots to have a mathematical chance of winning a majority in the Electoral College.

The problem with the polling requirement is that national polls only include the candidates from the major parties (this year, they only include Republican Donald Trump and Democrat Joe Biden), with an “other” option. Libertarian nominee Jo Jorgensen has qualified for and will be on the ballot in all fifty states and Washington, D.C., thus giving her a mathematical chance of winning the Electoral College majority, but because she is excluded from being an option in the polls, she doesn’t have the ability to reach the polling threshold and is thus kept off the debate stage.

I think going forward Americans deserve to hear from every candidate that is going to be on the ballot, and the polling threshold should be removed and only the presence on enough ballots for a mathematical chance should be what determines whether you get a place on the debate stage.