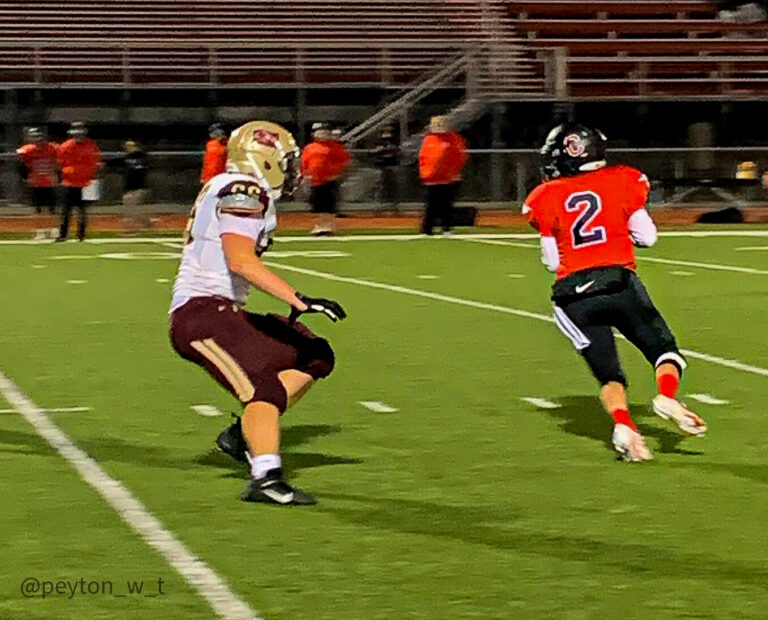 Junior quarterback Brendan Harps (#2, red), scrambles away from the pressure applied by senior linemen Zach David (#66, white) to look for an open receiver down the field.

The Chartiers-Houston Buccaneers traveled to Myron Pottios Stadium on Oct. 2 to take on the hometown Charleroi Cougars. Both teams coming into the game had one win and two losses on their overall records. It is safe to say that after this battle the Buccaneers would walk away with the 500 record and the Cougars would fall to three losses with the final score of the game being 48-13. Here is how this matchup turned from a close game, to ugly:

Charleroi started the night by kicking the ball away to Chartiers-Houston, but the Cougars decided to make it an onside kick and they would come up with the ball; a good start for them as they could set the tone of the game early, but this was not so as the Buccaneers’ defense held them and it was a turnover on downs.

Chartiers-Houston’s next drive would not go according to plan either as they ended with a punt back to Charleroi.

The Cougars would then start their drive in the middle of the field and get down to the Bucs’ 26-yard line, but then senior Jimmy Sadler Jr. would pick off junior quarterback Brendan Harps for his first turnover of the night.
Sadler Jr.’s interception would turn into a Sadler Jr. touchdown as on third and nine, he rushed for a 70-yard touchdown to put his Buccaneers up on the scoreboard. Freshman kicker Anthony Romano would make good on the point after to put the Bucs over the Cougars seven to zero. This would wrap up the first quarter.

On the Cougars’ first possession of the second quarter, they looked to try and get onto the scoreboard, but Buccaneer junior Nathan Cavallo had other plans. On a play where Charleroi switched out Harps for freshman quarterback Gianni Pellegrini, Cavallo intercepted Pellegrini and took it the other way for a defensive score. The point after was kicked in by Romano and it was now 14-0.

The next two alternating drives for the teams were uninteresting as Charleroi turned the ball over and Chartiers-Houston punted.

The Cougars’ next drive would result in them ending up on the scoreboard. This touchdown would not have been possible without the completion from Harps to senior tight end Darius Cooper who took them 25 yards and another completion from Harps to junior wide receiver Terrance Woods for a 15-yard gain. This would set Pellegrini up for the one-yard touchdown. They attempted to go for two, but it was snuffed out by the Buccaneers, leaving the score 14-6.

The Buccaneers would follow this up by creating some magic for themselves. They were looking at a third and a very long shot until the first down marker. Sophomore Terry Fetsko took the snap and found senior Carson Craig for a completion. Craig was stripped by a Charleroi player, then the loose ball was picked by none other than Jimmy Sadler Jr. for the Chartiers-Houston touchdown. The point after was good and the ball game was now 21-6, Bucs. This score would round out the half.

Charleroi would start the second half with what seemed to be a new attitude: they were going to score and they did just that. They started at their own 31-yard line and marched down the field into their opponent’s territory. With the likes of Cooper, Nikko Pellegrini, and Woods, the Cougars were on the doorstep of the Buccaneers. To cap off a great drive, senior running back Levi Hutchin would rush in for a 16-yard score and senior kicker Sam Icavangelo would make the game 21-13.

Chartiers-Houston would have yet another answer for Charleroi as they would clap back with their own set of points as Sadler Jr. rushed in from seven yards out. With the point after being good, the score was 28-13 and that score would silence the action until the fourth quarter.

To start the final quarter of this game badly, not only did that new attitude of scoring go away, Harps would throw another interception as sophomore defensive back Jake Male came down with the ball for his Buccaneers.  Chartiers-Houston would not be able to generate any offensive momentum, so they were forced to punt.

Charleroi’s next drive after the punt would have results to show on the scoreboard, just not the results they would like as Harps threw his third interception. Cavallo picked off the ball out of mid-air and took it back the distance for another defensive touchdown. Romano’s kick was good to make the game 35-13 in favor of the Bucs.

Chartiers-Houston would not have to wait much longer for points as on Charleroi’s next drive, Harps threw his fourth and final interception of the game. Carson Craig would be there for the Bucs as they ran back their third defensive touchdown. With the point after good, it was 42-13.

The Buccaneers would get one more time to put points up on the board and they did so with Cavallo rushing in for a 15-yard touchdown. The point after would be no good and this would bring the final score of the game to 48-13.

Chartiers-Houston will take this victory this week and prepare for next week, Oct. 9, as they will face off against Frazier in what should be an interesting game. Charleroi will look to shake off this loss as they travel to face Bethlehem-Center.