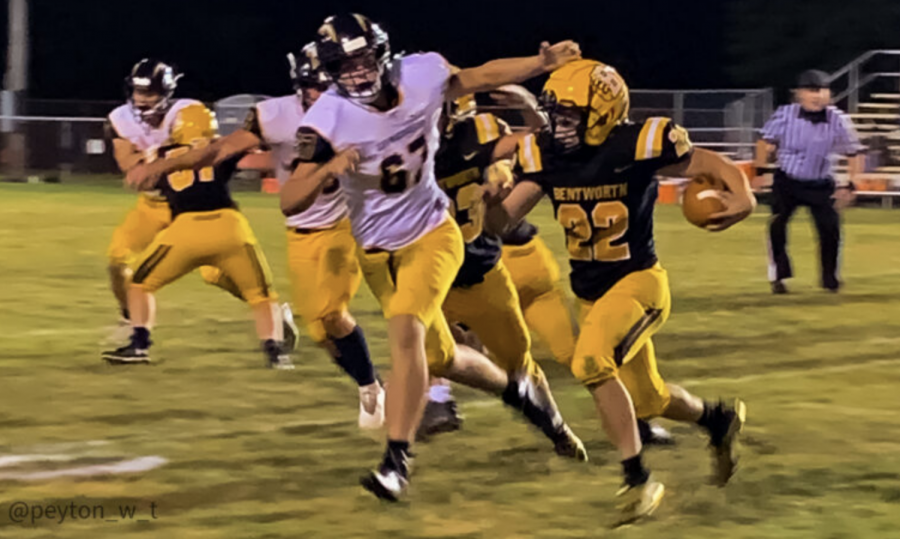 41-16…That would be the final score of this matchup between the Carmichaels Mighty Mikes and the Bentworth Bearcats, however, do not be fooled by the score.  This was a still a battle for both sides.  This game started out as a stereotypical Friday night high school football game, tightly contested and no team giving an inch.  What it ended up to be was completely different from the start.  Senior running back Bailey Jones would help his Mighty Mikes achieve victory by finishing the night with over 200 rushing yards and four touchdowns.  Here is how this battle went down.

Bentworth would start off right by winning the coin toss and electing to receive, but they were unable to set the tone of the game by scoring a touchdown.  They did try, but all was lost as the drive ended on a turnover on downs.  The Mighty Mikes’ first drive was no better than the Bearcats as they ended with a punt.

The Bearcats would take the punt and attempt scoring, but yet again, nothing happened.  They did make progress, however, a sack from senior Bailey Jones and a holding call would force them to punt the ball away.

Carmichaels would be the first to draw blood as junior quarterback Trenton Carter competed a pass to sophomore Tyler Richmond for an 11-yard touchdown.  The point after by senior kicker Christian Mori was blocked by the Bearcats defense to make the score 6-0 and that would be the last big play of the first quarter.

To start off the second quarter right, senior running back Owen Petrisek of the Bearcats would rush through the Mighty Mikes defense for a 29-yard touchdown.  Senior kicker Trevor Richardson would make the point after so Bearcats would gave their first, and unfortunately, only lead of the game for a score of 7-6.

Bentworth would not hold onto the lead for much longer as Jones would be credited with a 49-yard rushing touchdown on the first play after the kick return.  The Mighty Mikes would take the lead again with a score of 14-7 as Carter gets in for the two-point conversion.

The Bearcats would have no answers as their following drive ended with a punt and the Mighty Mikes got the ball back.

Carmichaels would take advantage of Bentworth’s silence as Jones would get his second rushing touchdown of the night.  This time, he rushed in from the 17-yard line of the Bearcats.  Mori’s kick was up and good and the Mighty Mikes now have a 14-point advantage over the Bearcats at 21-7 and that would bring this battle to halftime.

Carmichaels would start very sluggish as they go three and out and the ball was placed onto their own 26-yard line.  Mori calls for the ball to get ready to punt it away, but the ball sails over his head and rolls into the back of the endzone for a Bearcat safety.  Senior linebacker Gavin Cevarr would be given credit for the score.

This next drive would be Bentworth’s best drive of the game.  After the free kick, spotted on Bentworth’s 45-yard line.  From there, they would start to grind out as they got contributions from everyone.  All the cylinders were clicking.  The Bearcats marched down the field into Mighty Mikes’ territory with the likes of senior running back Trent Cavanaugh, Owen Petrisek, and with the quarterbacking of junior Seth Adams.  The drive was finished whenever Petrisek went in for a short rushing touchdown.  Richardson’s kick was good and the scoreboard read 21-16 to Carmichaels.

To finish off the third quarter, the Mighty Mikes would get the ball back.  They needed to halt the Bearcats momentum.   So, starting at their own 26, Carmichaels made a push of their own and used their own weapons such as Jones, Richmond, and Carter.  Their drive was almost finished whenever the officials had to bring out the sticks on a 4th and inches call, but it was in favor of the Mighty Mikes.  Jones picked up his third rushing touchdown on the first play of the fourth quarter.  With the two-point conversion no good, it was 27-16.

The Bearcats could not replicate their momentum and ended up punting on their next drive.

Richardson’s punt would be downed at the Carmichaels 15-yard line.  The Mighty Mikes tried a run play with Jones, but there was no gain.  On second down, Carter found senior wideout Jacob Smith for an 85-yard touchdown.  Mori got it through the uprights and the score was now 34-16, Mighty Mikes.

The Bearcats tried to at least get some more points on the board but Carmichaels’ Michael Stewart had other plans as he picked off Adams.  The Mighty Mikes would take advantage of Stewart’s snag and Jones would rush in for his fourth and final touchdown of the night.  This brings the final score of 41-16 as Mori’s kick was up and good.

The Bentworth Bearcats look to move forward from this loss as they will travel to take on Jefferson-Morgan next week.  Carmichaels looks to keep their record perfect as they will be on the road again.  This time against West Greene.