High school football: Charleroi sputters as McGuffey comes away with a decisive victory 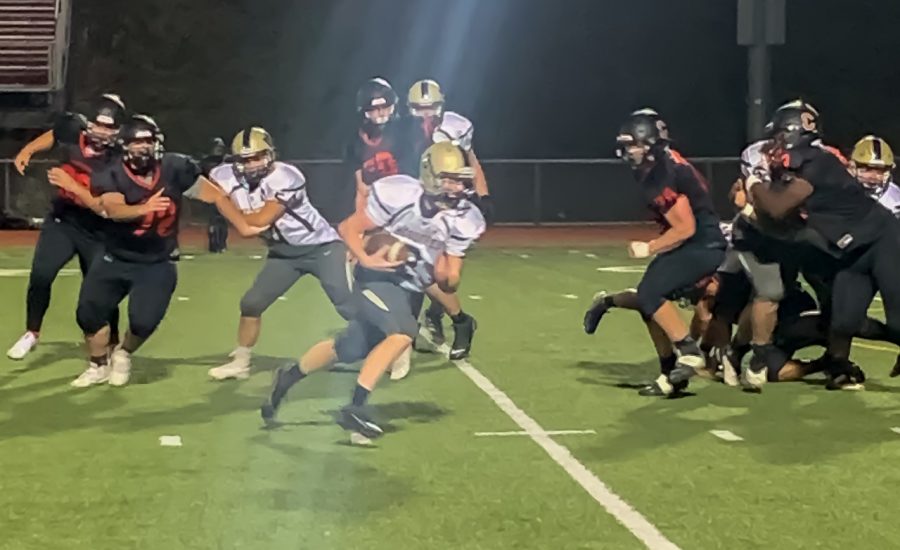 On Friday night, the McGuffey Highlanders made the trip down to Myron Pottios Stadium in Charleroi, Pa. to take on the Charleroi Cougars in their first home game of the season.  The Cougars were looking for a quick win after getting shut out against Frazier last week on the road and put their first tally in the “W” column.  On the other side, however, the Highlanders were looking to continue their momentum of winning as they pulled off a very tightly contested win against the defending section champions in the Washington Prexies 7-6 last week.  McGuffey would use this momentum to stomp out the Cougars 40-6 on the road and this is how the Highlanders got their victory.

Now knowing the score, one wouldn’t have thought the score would end up being so large, for one team, because the first two Highlander possessions ended as turnover on downs and Charleroi’s first drive ended as a punt.

On the Cougars second possession after two downs, they ended up with a 3rd and 8 with the ball on their own 36-yard line.  Freshman quarterback Gianni Pellegrini dropped back and was sacked for a loss of 11 yards by Aiden Brookman and were now faced with a 4th and 19 at their 19-yard line.  Then, the next play starts and the ball goes flying over Pellegrini’s head and lands in the endzone where McGuffey’s Rocco Falosk falls on it and gets the first touchdown of the game.  Kicker Nate Witowsky makes the extra point and it is 7-0 to the Highlanders.

To close out the first quarter, the Cougars got the ball back after the touchdown and didn’t do anything good with it.  On fourth down, Charleroi decided to go for it.  This backfired as Pellegrini’s pass was caught by McGuffey’s Phillip McCuen.  After this, a few more plays were ran by McGuffey, then the quarter was over.

To start off the second half right, the Highlanders marched down the field to score another touchdown as Kyle Brookman punched it in from the 1-yard line.  Witowsky made the PAT and the score was 14-0 McGuffey.

Charleroi got the ball back, ran one play, and then Pellegrini was picked off yet again.  This time, it was by sophomore Eric Donnelly.  This interception led to another Highlander touchdown by Kyle Brookman as he ran it in from the Charleroi 9-yard line.  The point after was good and the big scoreboard said McGuffey was up 21-0.

Charleroi’s next drive would end in a punt and McGuffey’s next drive would end with McKinley Whipkey crossing the plane from a yard out.  This was possible with the help of senior quarterback Rocco Falosk completing a pass to junior Ethan Janovich for 38 yards, putting the ball at the Cougar 2-yard line.  The score would now be 27-0.  The extra point was no good as it was blocked by senior Darius Cooper.

On the kickoff following that touchdown, Charleroi was expecting just a normal kick but what they got was an onside kick.  A Charleroi player touched the ball and then McGuffey sophomore Tristan McAdoo lands on the loose football on the Cougar 31-yard line.  This recovery would lead to a Highlander touchdown scored Whipkey.  The extra point was good and the score would be 34-0 McGuffey.  This would also conclude the first half of play.

Since Charleroi deferred until the second half, they would now start with the ball.  Unfortunately, on 3rd and 2, Pellegrini was picked off by Ethan Dietrich.  Unfortunately for the Highlanders, this interception would end on a turnover on downs.

On the Cougars next drive, they ended with negative 10 yards as Charleroi was forced to punt on a 4th and a long 25.  The punt was short and McGuffey set up shop at the Cougar 24-yard line.  After making it to the 14-yard line, McCuen was able to storm passed the Cougar defense for six points.  The PAT was no good and the score was 40-0.

On Charleroi’s next drive, it almost seems like the woke up.  Pellegrini found junior Terrance Woods on a route on 2nd and 6 to give Charleroi their first, first down of the game with only 35 seconds left to play in the third quarter.  Just as the third quarter ended, the Cougars were able to break what seemed like another milestone in the game as they were able to cross midfield for the first time all game with a run from junior Nikko Pellegrini.

As the final quarter began, the Cougar’s offense started to click as they were slowly marching their way up the field.  With a few big plays by junior wide receiver Brennen Shannon, the Cougars were threating to score.  On the McGuffey 19-yard line, Nikko Pellegrini rushed and trucked his way for the first points for his club as the score was 40-6.  The two point conversion after the touchdown was no good.

The Highlanders got the ball back with 5:45 left to play in the ball game.  They were not able to make any chances for themselves, but they did provide a chance for Nikko Pellegrini as he snatched the ball out of the air and came down with it.

With that last play, the ball game was over.  The McGuffey Highlanders winning over The Charleroi Cougars 40-6.

McGuffey will take on the Frazier Commodores for a conference showdown next week at home on Friday, Sept. 25.  Charleroi will travel to play against the Waynesburg Central Raiders.