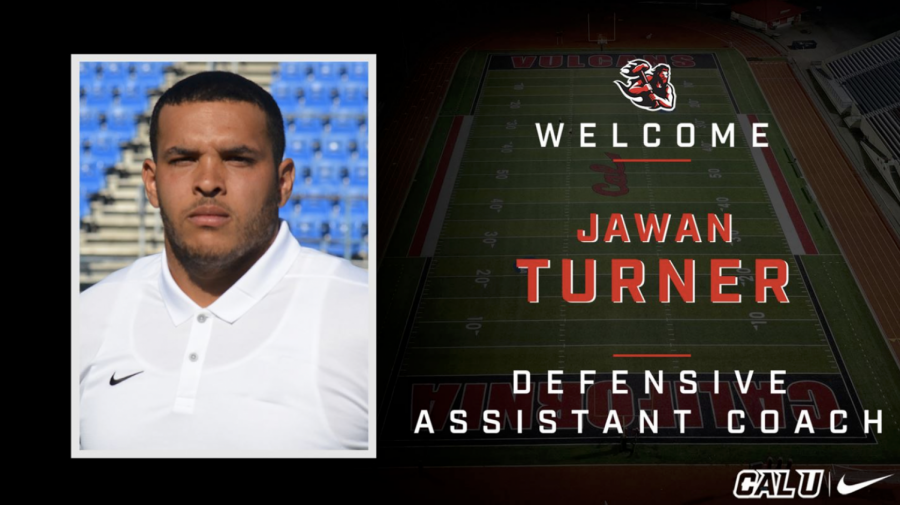 A recent standout for the Vulcans, Jawan Turner was announced as a defensive assistant coach for the California University of Pennsylvania football program on July 13.

“I am truly blessed to be back at Cal U, a place that took me in and helped me grow. The traditions, culture and people here are what makes Cal U so special,” said Turner. “I want to thank all the great people and coaches I have encountered that have helped me along this journey. Without those people, my family and God, nothing I have accomplished would have been possible.”

A native of Pittsburgh, Turner earned All-PSAC West status three times with the Vulcans and twice received first-team honors. He led the team and ranked among the top 10 in the league in TFL and sacks during his first year as a starter. As a senior, he finished with nearly 50 tackles and garnered all-region laurels from multiple organizations. Turner served as a captain in 2016 and helped anchor a unit that finished in the top 10 in the country in total defense and scoring defense, as the Vulcans captured the PSAC Championship and advanced to the third round of the NCAA Playoffs.

“We are very excited to add Jawan to our coaching staff,” said head coach Gary Dunn. “He was a great player at Cal U and has worked extremely hard in becoming a good young football coach.”

Turner started his coaching career as a graduate assistant at Lenoir-Rhyne in the South Atlantic Conference (SAC) in 2017 under former Cal U head coach Mike Kellar (2012-15). The following year, the Bears recorded an incredible nine-win improvement and finished 12-2 overall under first-year head coach Drew Cronic, who is now the head coach at Mercer (Ga.) – a NCAA FCS program. Lenoir-Rhyne posted a 7-0 league record to win the 2018 SAC Championship and advanced to quarterfinals of the NCAA Playoffs.

While with the Bears, Turner worked with both outside linebackers and defensive ends. He aided in the development of All-American defensive end Jaquan Artis, who was a 2019 national finalist for both the Harlon Hill Trophy and Gene Upshaw Award. Artis closed his career with a school record 29.0 career sacks after leading the country with 14.5 sacks last fall.

Turner reunited with Kellar last year as the defensive line coach at Glenville State. The Pioneers finished with a 7-4 overall record after winning their final three games of the season, highlighted by a road upset of MEC Champion Notre Dame (Ohio). Glenville State featured the top scoring defense and red-zone defense in the league, plus finished fourth in the MEC in rushing defense and total defense.

A product of Woodland Hills, Turner completed his bachelor’s degree in communication studies with a concentration in speech communication from Cal U in 2017. He later earned his master’s degree in leadership from Lenoir-Rhyne in 2019.

Turner fills the vacancy on the coaching staff that was created when Peter Davila became the defensive backs coach at Albany (N.Y.), a NCAA FCS program, in March.