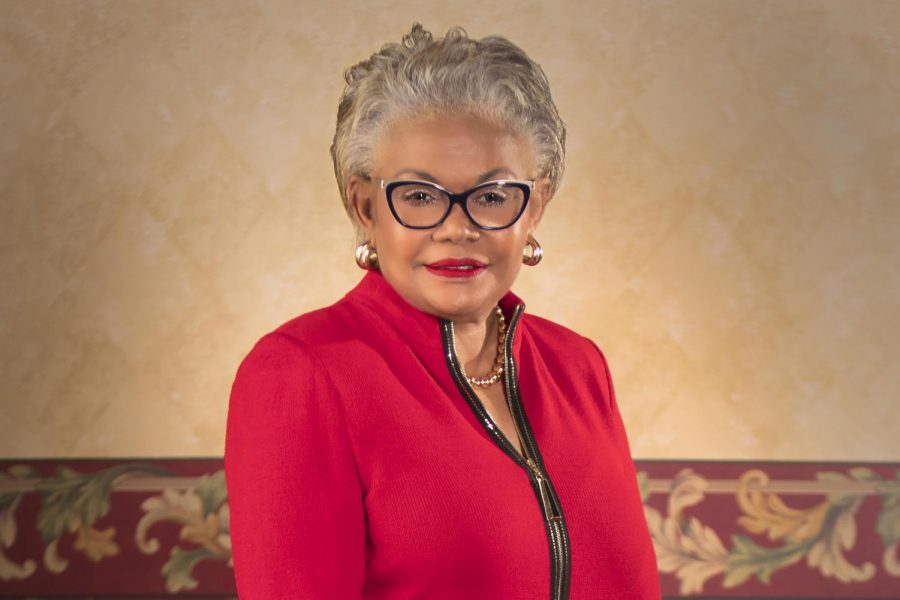 (May 18, 2020) Eight years after stepping into the leadership role at California University of Pennsylvania, President Geraldine M. Jones announced that she will retire early next year.

In a message to students, faculty, staff and alumni, President Jones says she “will leave with wonderful memories – and the confidence that Cal U has the strength to rise, boldly and proudly, to meet whatever the future may bring.”

Jones, 69, plans to retire Jan. 29, 2021, and looks forward to “spending time with my beautiful family and having the opportunity to travel with my best friend and husband, Jeff.”

A first-generation college student and a proud California alumna, Jones earned a bachelor’s degree in education from California State College in 1972 and her master’s degree, also in education, in 1980. After teaching briefly in the Albert Gallatin School District, in Uniontown, Pa., she returned to her alma mater in 1974 and built a 46-year career as a faculty member and administrator.

She directed the Upward Bound college access program for 20 years and served 11 years as chair of the Department of Academic Development Services. She was associate dean of the College of Education and Human Services for two years before serving as the college dean from 2000-2008.

In July 2008, Jones was named provost and vice president for academic affairs – the university’s chief academic officer. She held that position until being appointed acting university president in 2012. After four years in acting and interim roles, she was named University President on April 7, 2016, becoming the first woman and the first person of color to hold that title.

Since 2012, Jones has led development of the university’s 2015-2021 Strategic Plan and instituted a system of shared governance that brought faculty, staff and students into decision-making processes. She reorganized university leadership to create Cal U’s first Enrollment Management division and started a successful Winter College program to offer courses between the fall and spring semesters.

She instituted Cal U’s first doctoral programs, offering advanced degrees in health science, criminal justice, and educational leadership, and established the Center for Undergraduate Research, which supports faculty-led research, scholarship and creative endeavors for students in all fields of study.

During her tenure as president, Cal U introduced academic programs aligned with its special mission in science and technology, including drone technology, molecular biology and veterinary technology. Programs ranging from applied behavior analysis and conflict resolution to cybersecurity and social deviance also debuted, and the Department of Business and Economics reorganized and achieved initial accreditation from ACBSP, the Accreditation Council for Business Schools and Programs. The university also assumed operation of the former Washington Health System School of Radiologic Technology, based at Washington Hospital in Washington, Pa.

As a Cal U alumna, President Jones engaged with numerous fellow graduates to bolster scholarship support for students. She and her husband, Jeff, founded the Bow Ties & Pearls Club to recognize high-impact donors.

In addition, President Jones secured the largest philanthropic gift in Cal U history, $4.2 million to found the Karen and Tom Rutledge Institute for Early Childhood Education. The institute operates a campus-based child care center for economically eligible preschoolers, and it provides full scholarships for future early childhood educators who gain hands-on experience at the center while earning a degree.

“Over more than four decades I have come to know this University’s resilience, and I have seen firsthand the countless ways that Cal U changes lives, including my own,” Jones said. “I feel blessed to have played a role in helping to move our University forward.”

The president’s announcement triggers a Process for Recommending Presidential Appointment outlined in detail by the Pennsylvania State System of Higher Education.

According to PASSHE policy, the chair of Cal U’s Council of Trustees will form a Presidential Search Committee that includes representatives of various university constituencies, including faculty, staff, students, alumni and trustees.

A consulting firm will be selected to undertake a “university leadership needs assessment” and assist in the search process.

Next, the Council of Trustees will forward its recommendations to State System Chancellor Dan Greenstein. After consulting with the chancellor, the Board of Governors for the State System will interview the candidates and select Cal U’s next president.