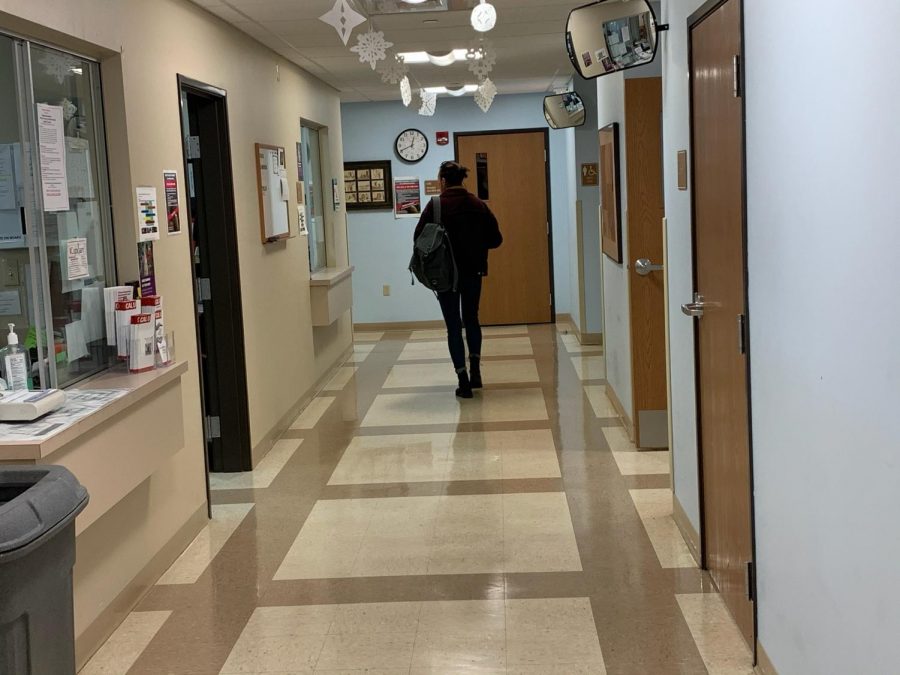 A student walks down the hall of Cal U's Wellness Center located in Carter Hall.

I’ve never had an STD before. I never thought of myself as the kind of person who would ever receive this grotesque gift that everyone pretends to be so ashamed of, like those lumps of coal in our stocking on Christmas morning. I have been tested for sexually transmitted diseases a handful of times since the dawn of my adulthood, specifically twice here at California University of Pennsylvania, and never have they preceded a phone call that informs me of a little nest of bacteria cultivating inside me.

The Central Outreach Wellness Center of Allegheny County appears on campus twice a year, offering tests for Chlamydia, Gonorrhea, Syphilis, and HIV. The Health Center at Cal U posted an ad to the daily announcements page before the spring semester had even started, and I figured that I should attend, just for a routine checkup. The testing was scheduled for Feb. 5 in the multipurpose room of Carter Hall from 11 a.m. until 2 p.m. Unlike past visits, I tackled this excursion by myself.

The young girl sitting at the improvised front desk gave me instructions to first reveal all of my secrets to a form and then force myself to pee in a cup. I nodded as if I heard anything she had just said. A group of four boys wobbled and jostled behind me, almost stepping on my heels; all three of them had headphones in, yet continued to scream at each other through what should have been the tone of a normal conversation. I plopped myself down in an empty chair and filled out the form among the tumultuous mass of students who were waiting to be tested.

I couldn’t hear myself think. It felt like recess on a winter day in elementary school, except there were condoms and caffeine-infused college students instead of crayons and kindergarteners. I rushed through the form and shuffled to the bathroom with my luggage of books.

Girls were stuffed inside the restroom. I waited in line with my plastic cup and brown paper bag. I was the only female in the restroom without a wingman.

“I peed on my hand,” shouted a voice from inside one of the bathroom stalls.

The stall was dark and cramped, yet I still sat in there for longer than necessary. A flock of females surrounded the sinks and bragged about all of their possible causes for an STD. I escaped my cell, washed my hands and fled the mayhem in silence and sweaty armpits.

The absence of structure and organization for the event was astounding. The line in which we waited to be tested was nonexistent. I watched as students who walked in 30 minutes after me, disregarded myself and the others who had been patiently waiting for over an hour, hop in the seat to be examined. Groups of students, enraged by the wait which had caused them to miss class, left their cups of urine and forms on the tables and stomped out of the room.

“This is bullshit!” seemed to be the communal theme of the event.

The two examination stations were also built into a rather innovative production – two folded tables used as privacy barriers. Two medical assistants from Central Outreach in Washington, Pa., Aaron Youngblood and Allison Barrow, were performing the tests at each station.

As the room began to clear, I mustered up enough courage to grab an empty seat closer to the examination stations. I was initially trying to sit with Barrow, for the simple fact of us both being females, but I had been waiting far too long to care at this point. After one student was finished with their tests, I jumped up and walked behind the makeshift curtain of Youngblood’s station.

He proceeded to ask me a dozen questions, all of which I felt hesitant to answer. I felt judged by the entire room, as if there was a microphone hidden behind the cardboard tower of plastic gloves. There were only about five students left in the room, and I could feel the heat from their eyes on my back, but Youngblood’s affable ambience made me relax my shoulders and spit out a few laughs as he explained the procedure.

The test consisted of a mouth swab and a drawing of blood, aside from the sample of urine we were to produce ourselves beforehand. The mouth swab, however, was something I had not remembered from prior STD tests.

“STDs often go untreated because doctors don’t test in every location of possible infections,” said Aaron as he drew a stream of blood from my arm. The thought of walking around with an infection for months, or even years, and not being aware of it made me nauseated.

Doughnuts and juice boxes were provided for students who felt sick after having blood drawn, but they had all been taken by the time I was finished. Rushing to the exit, I was hopping over the puddles of condoms and STD awareness pamphlets. It was now going on 3 p.m.; I was tired and hungry and felt like I had wasted two hours of my afternoon for nothing.

When you hear discussions about sexually transmitted diseases, whether it be as a teenager in a classroom or at the kitchen table, or through the grapevine of a college campus, you never think that you would be the one standing in line at the pharmacy to pick up your own antibiotics. At least, I never thought that it would happen to me.

I had honestly forgotten about the test and the horrible experience that it entailed. Two days had gone by and I was sitting in my living room with both of my parents. An unknown number caused my phone to rattle the walls and catch the attention of everyone in the room, including my dog. I answered my phone in a fog of oblivion.

“Hi, is this Meghan? This is the Central Outreach Wellness Center. Your results came back positive for Chlamydia in your throat.”

Everything that followed that statement was lost in the void. I began to drown in my own perspiration. I felt disgusting in my own skin. This wasn’t supposed to happen.

“Who was that?” my parents asked simultaneously. I lied and ran upstairs to gargle my mouth with bleach.

I stopped in the Health Center to receive my antibiotics the following Monday, thinking this was where I had been instructed to go during that unwarranted phone call. Unfortunately, I was wrong.

“I don’t know who told you to come here, but we can’t give you antibiotics for that,” said the nurse with the grey beehive on her head.

She led me to a separate waiting room, where I sat for 15 minutes while listening to the nurse whine to the other nurses that she didn’t know what to tell me. Debbie Anderson, the nurse supervisor of Cal U’s Health Center, came back and brought me to the front desk where she had a woman from Central Outreach Wellness Center on the phone, waiting to talk to me.

“We told you to come to OUR wellness center. If you let this go untreated, it could lead to infertility or other diseases,” said the witch on the phone, as if I hadn’t already known that.

The tears were dripping off my chin and onto the counter. Anderson handed me a box of tissues and gave me an empathetic apology with her eyes. I hung up the phone and reminded myself to breathe.

After a few unpleasant interactions between the Rite Aid pharmacy at 404 Third St. and the Central Outreach Wellness Center in Washington that afternoon, I finally was able to pick up my Azithromycin on Feb. 11. The four white pills tasted of chalk and regret.