Fresh ink: getting my first tattoo for a class assignment

A student's experience about getting his first tattoo for a writing assignment. 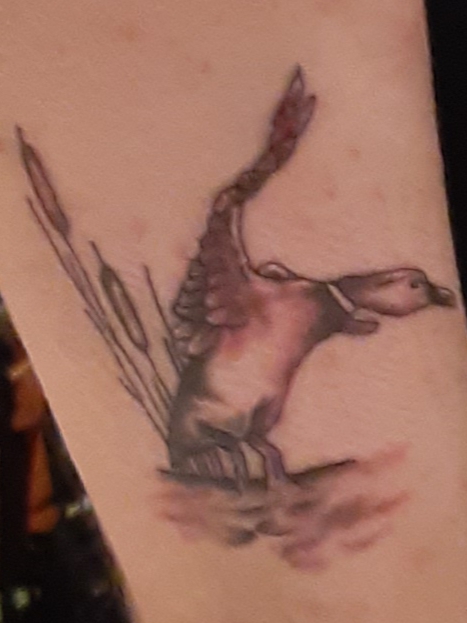 I have always wanted to get myself a tattoo; something permanently branded on myself that would properly exemplify my passions and emotions. A minuscule part of me feared the pain. A larger portion was either too lazy or did not feel like using the money to get one. It took me a long while, but I finally found a reason to get one.

My Journalism- Feature Writing course presented the class with an assignment that I, personally, was worried about, despite it being something I should have been prepared for.

I thought that it would be relatively simple: all I had to do was think of something to engage in- an event or task that would often be seen as unique. For the life of me, I was unable to conjure a unique and interesting story of what I could take part in. I could not bring myself to participate in many of the unique activities past students had done. Then, we reviewed a student’s paper who talked about her first experience getting a piercing. I have never been interested in getting a piercing, but it certainly struck inspiration.

I could finally get my first tattoo.

The second-most complicated process throughout the entire plan was figuring out what I wanted to get. This was a design that will forever be a part of me, unless I pay loads of money for laser removal surgery. I had a plethora of ideas: I could get a unique symbol drawn that I made up as a child; maybe an open book with inspiring words on it for my passion for writing novels; maybe my favorite bowling ball that I own; maybe something more personal and symbolic. The possibilities were endless, and I had until Sunday to decide, or so I thought.

Ultimately, I decided on getting a simple duck: my favorite animal since I was 5. I messaged my best friend, Colby, to see if he could give me a ride since my roommate was home for the weekend. He could not, he was on-call. I proceeded to reach out to several other friends, hoping they could provide transportation. Unfortunately, no one was able to.

The weekend came to an unfortunate conclusion, as I never got the tattoo. However, there was an opening on Tuesday to get the tattoo.

“Tuesday?” I thought to myself, still panicked. “That is the due date for the rough draft. There is no way I can go to class, get the tattoo and write the paper in the same day!”

I had no choice. It was either I enter crunch time, or I accept the zero. I was not accepting the zero.

Tuesday rolled around slower than I had preferred. Not only was I excited to get the tattoo, but I was excited to get Colby, who was able to drive me on Tuesday, his first real bowling ball. The anticipation swelled up inside me.

The time has arrived. My first and only class concluded, and, with that, I knew that the time was turning thin. Then Colby calls me and presents troubling news.

“So,” he began, “I think there might be some trouble. Thunder and Lightning do not accept walk-ins, if I remember correctly.”

I began to panic once again, believing that I would truly receive a zero. He arrived at my dorm and we began looking up more tattoo parlors. One that struck me was a place in Brownsville called Electric Crayon. I called them moments later once I built up the nerve, I despise making important calls. A man with a deep voice picked up the phone. They did accept walk-ins, but they claimed to be busy. Before I had the time to curse under my breath, he informed me that if I could show up at around 6:30 p.m. another employee would be able to take care of my tattoo.

Relief swept over me and I hung up the phone after additional information was relayed. I messaged Colby and we set out an hour later.

It was about an eight-minute drive. We pulled up to a small shack-like building that did not look as busy as I had understood it to be. In fact, we were the only ones there. Perhaps what he meant was that he was busy drawing up tattoos for future patients. I still do not know. The small building had large, fake crayons strapped to their fence at the entrance; a nice touch to their design, I thought.

We entered the building and immediately a loud alarm went off, signifying a customer has entered. I would be lying if I said this did not startle me. The room was just as small inside as it appeared outside. The first thing Colby and I spotted was the fish tank in the front right-hand corner of the room. Hard rock music was blaring from the speakers in the ceiling. It was my kind of music, so I took the time to enjoy it. They had a comfy sofa just left of the door and a large flat-screen television across with various gaming systems. Overall, it was a tidy environment.

A decently tall woman, whose name I do not recall, greeted us at the counter. I was admittedly rather nervous, I did not have a proper photo of a duck on my person to present. After a few moments of scrambling through pictures of ducks on Google Images, I found one that I was thoroughly satisfied with and presented it to her. They searched it up on their frustratingly slow desktop. Mike, the man who gave me the tattoo, was getting aggravated at the slow internet speed. Once it loaded, they printed out the picture in a different size each until it fit well on my skinny arm. They said that they will take some time to draw it up, which took about 20 minutes, and then we would begin.

Colby and I remained on their comfortable sofa indulging in random banter, mostly about bowling. Time passed and they summoned me to the back where they would soon begin giving me the tattoo. Mike, a large man with several tattoos across himself, and a shockingly shorter beard than my own, plastered a purple outline of the design on my upper left arm. We sat down and discussed various different topics, such as why I wanted to get a duck.

I told him the story of why ducks are my favorite animals since he believed that I was a professional duck-caller. I am not. I have loved ducks ever since I was a young child of 5 and I tried to stealthily steal one from the local duck pond on a field trip, and mercilessly broke into tears when I failed. He chuckled and he began inking my arm once the outline dried.

The pain of the vibrating needle was something I never focused too heavily on. I always believed that I was fairly pain tolerant. It felt like I was being pinched the entire time, but not too hard. Mike gave the analogy that it would simply feel like a paper cut at the start, but that the pain would quickly die down. Honestly, the pain was even less than that. I hardly winced as he began carving the needle across my skin.

I observed as he began tracing the purple outline that was plastered on prior. The needle repeatedly stabbed into my skin as he dragged it along the lines. Black ink began flooding out of the needle, which he stopped from seeping down my arm by periodically wiping it with a paper towel. Once the outline was complete, he began shading in the water, the wings of the duck and the inside of the cornrows.

Once the outlining and shading were complete, he took the liberty of adding some white to certain areas to “give it more life.” I agreed with his decision, for the duck was made better because of it. He covered the tattoo with a paper towel and tape to absorb some of the bleeding. The procedure was complete, and he gave me tips on managing it as it heals: I am required to gently wash it by hand, add healing ointment at least three times a day and, most difficult of all, do not scratch it. Observing my tattoo now, I know that resisting to scratch it once it starts itching will be the most painful obstacle in this entire process. I will persevere, though.

Mike offered cheaper pay than what it would have typically been since he enjoyed the banter and because it was for an assignment in college. He made several jokes about increasing the price because of small things, but they were just jokes; he enjoyed those kinds of jokes. One of these jokes was him stating that each time I move, it would be an additional $50 on top of the $60 already due. I paid him the $60 that I owed him, then Colby and I departed after a farewell conversation and a promise to return once I wish for another tattoo.

Colby and I discussed more bowling as we returned to campus and walked back to Carter Hall. We departed ways when we passed Herron. I entered my dorm and was humorously berated by my roommate, but he was relatively impressed by the tattoo. I took the covering off and sent a picture to my mother, father and sister, and they had the same amazed reaction. It was the same reaction I had and will likely continue to have. I am proud of the tattoo, and I certainly intend on going back to the same place for more in the future.