How “The Basement” heals: A student’s journey from heartbreak to art 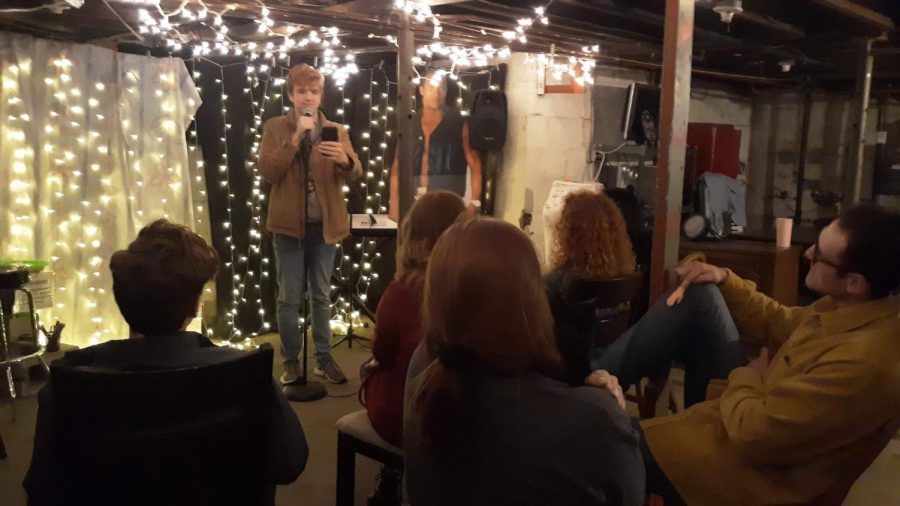 Jeromy Mackey performing in "The Basement" at California University of Pennsylvania

It’s a Friday night in my college town, and while so many of my fellow “Vulcans” are scouring the dilapidated Mon Valley area of California, Pennsylvania for fraternity parties or anywhere to find amusement in our one-stoplight town, I am standing at a microphone in a dank cellar as a life-sized cutout of Dwayne “the Rock” Johnson looms over me.

This is The Basement.

“The Basement” is the nickname for the weekly open-mic art sharing event that takes place on Fridays in the Theatre House at 122 Third St. The full name is “The Basement: Trial and Error,” which is a concise representation of what The Basement is. It’s a place for the bohemian souls of young adults to come and perform anything from poetry to a debate on which “Hollywood Chris” is the best. Anyone and everyone are welcome, whether they be a Cal U student or not.

While I had been on the original staff during the inception of The Basement, it had been quite a while since I had performed. A few months ago, my ex-fiancé, Hailey, and I ended our engagement, and she moved out of our apartment and into the Theatre House. The discomfort of that situation had temporarily robbed me of the courage to perform any sort of vulnerable art I could create.

Until Feb. 7, when I finally had the courage to not only perform for the first time in months but to address my healing process in front of so many of my friends. I had been mulling over the idea all week, but when I learned that Hailey would be at this “Basement,” I decided that I wanted to perform a spoken word about where I was at, and how I was beginning to heal.

I spent the day feverishly writing, editing and rewriting a long stream of consciousness about how it felt not only losing a romantic partner but a foundational pillar of my life. When I finished the piece, I sent it to my best friend, roommate and host of The Basement, Noah Dohanich. I asked him if he thought it was appropriate to read, or if he thought it was an attack in any way.

“Brother,” he said, “this is a beautiful first step for a long healing process for you. It isn’t mean, do it if you need to, because that’s what The Basement is for.”

“…that’s what The Basement is for.” Those words rang through my brain like the reverb of the amateur sound system that would later project the powerful lingual bandages contained in my poetry. While I had attended so many Basements as both a staff member and a participant, I had never really let myself use it as it was intended, a “place for all art under the sun” as its slogan reads.

So, when I arrived at The Basement 15 minutes before its 11 p.m. go-time, I was motivated and excited to share this piece with this trusted community. When I walked in, I was embraced by many of my friends with long hugs and kisses on the cheek just because they were happy to see me after my brief hiatus. All of the love and encouragement siphoned the terror and anxiety I was feeling about my first public acknowledgment of our breakup.

Then I see him.

Standing next to the woman I almost spent the rest of my life with was a tall, handsome, athletically built man, who needed no introduction. I knew exactly who he was: his name, major, university, hometown and his high school alma mater from hours of late-night mental self-flagellation stalking his social media. I had gone through some dark times, and while I had been feeling a lot better, I hadn’t expected such a surreal trigger like the one that was caused by seeing him.

Any courage I had drained out of my body and oozed out of my mismatched socks as I quickly became fully aware of every aspect of my appearance and presence in this “safe” place. I sat down next to my friends and tried to keep my eyes trained away from the back of the room where they were standing.

Each act at The Basement is welcomed with a beloved crass tradition where everyone yells “F— yeah” as they walk up. As we progressed through the set list, each “F— yeah” felt like an alarm clock that won’t stop ringing no matter how many times you slam the snooze button.

Finally, Noah called my name and as I walked up to the mic, trying to not let my iPhone slip through my perspiring fingers, I heard that ritual mantra, and I truly took in this beautiful underground exhibition for the first time.

The previous underbelly of this house, pre-“Basement,” flashed through my eyes. What was once the musky party haven for its previous tenants, had been transformed into a venue full of dazzling lights, signs of positive affirmations, flashes of color from a makeshift disco light and a sea of caring faces brought together by our collective love. They filled the four rows of assorted foldable metal chairs, stools and whatever else people could find to sit down and soak in the evening.

And then it spilled right out of me, “I almost tried committing suicide over break.”

There was a stunned silence throughout the space. I have always tried to present myself as the guy who has it all together, but this place allowed for me to be broken. As I read the poem, I felt the brokenness shine through and the magnetic energy of everyone’s smiles and tears began to assemble the pieces back together.

When the poem concluded, I quickly went back to my seat and sat down. I locked eyes with Hailey and though she looked upset, I knew that in time she would understand that I needed this. I needed The Basement, and I needed her to hear.

Noah rushed over to me, wrapped his arms around me, kissed my head and whispered, “I love you man, and I am so proud of you.”

I was proud of me too. Proud of the poem, but also proud of this beautiful safe haven I had helped create; now, it had finally helped me.

The final step in this therapeutic journey happened the following day when I found myself waiting with Hailey’s boyfriend in the Mon Valley General emergency room after Hailey and I’s mutual friend had an accident. Because of The Basement and the courage it gave me to share my piece, he and I had a talking point to begin an hour-long conversation about how difficult love can be and the fragile nature of heartbreak. We connected in that moment, a connection so unbelievable it can only be described as art itself. Thank you, Vinny, Hailey and Noah, for creating that art with me because that’s what The Basement is for.