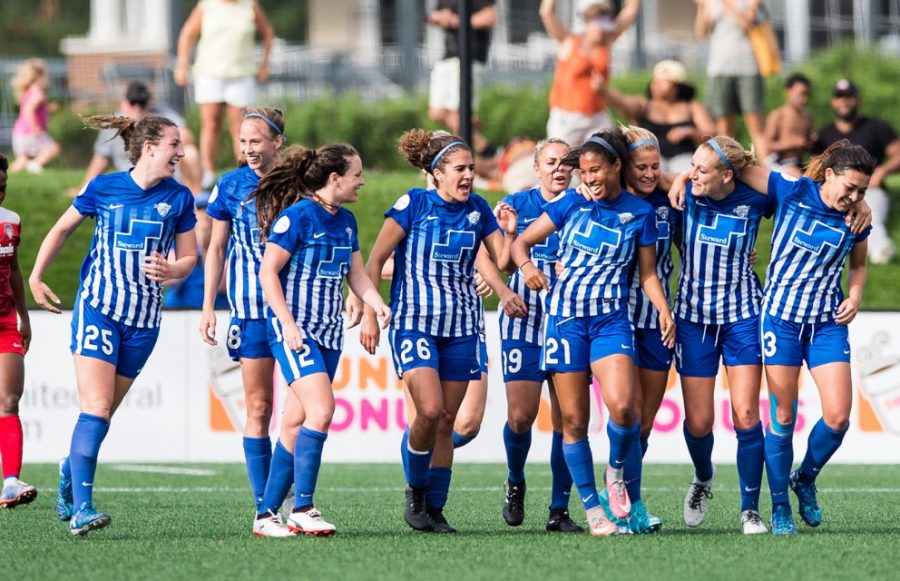 Photo of the Boston Breakers during the 2017 season courtesy of Mike Gridley/ISI Images.

The National Women’s Soccer League is officially back to nine teams.

On Jan. 28, the Boston Breakers announced that they will not compete further in the league, which is entering its sixth season.

The Breakers, owned by Boston Women’s Soccer LLC, could not find the correct amount of funds to participate in the upcoming season, slated to begin in April. Also, the team was barely keeping up with the league minimum for salaries.

However, the fall of Boston, one of the first teams in the NWSL, is a devastating occurrence for the league. They aren’t the only team to fold before the start of the season; back in November, FC Kansas City announced their folding.

However, FC Kansas City was replaced by the Utah Royals, who will compete in their first season this year.

So what could have been done to save the Breakers?

First off, the league should have stepped in further. The NWSL interim commissioner, Amanda Duffy, preaches about the success of the league, but hardly puts in work when a team is at risk of folding. Instead, Duffy just falls back on comments that the league is “excited” about the future of a team in Los Angeles.

But what about the ones that are already part of the league, Amanda?

These are players that have money, and could have partnered up with each other to buy the team, keep it afloat and have it compete until they could find a permanent owner.

Yet, when the team folds, former players are the first to call out the league, offer their “condolences” to the team and then completely ignore it later on.

Boston isn’t necessarily a “soccer town;” the city is mainly focused on the New England Patriots of the NFL, the Boston Red Sox of the MLB and the Boston Celtics of the NBA. Even Boston-based MLS team, the New England Revolution, doesn’t get enough spotlight.

The Revolution are owned by Robert Kraft, the same man that owns the Patriots. With pockets as deep as his, it makes me wonder why he couldn’t come in and purchase the Breakers.

One thing that needs to happen in U.S. Soccer is the combined effort of MLS teams working with NWSL teams. There are teams that have MLS partnerships, i.e. the Houston Dash/Houston Dynamo and Orlando Pride/Orlando City SC. There is even a partnership between North Carolina FC, a USL second-tier division team, and the North Carolina Courage.

So why won’t Kraft jump shift to the Breakers and get another team under his belt?

Kraft loves winning, and that’s something that the Breakers haven’t done. However, with the roster that the team would have had – with Angela Salem, Allysha Chapman, Megan Oyster, Lavelle, Abby Smith and Adriana Leon – there is no way the Breakers wouldn’t have made the playoffs.

In the end, the NWSL will lose yet another team while hopeless promises of a Los Angeles expansion team plague the league.