For and Against: Trump’s first year of Presidency discussed 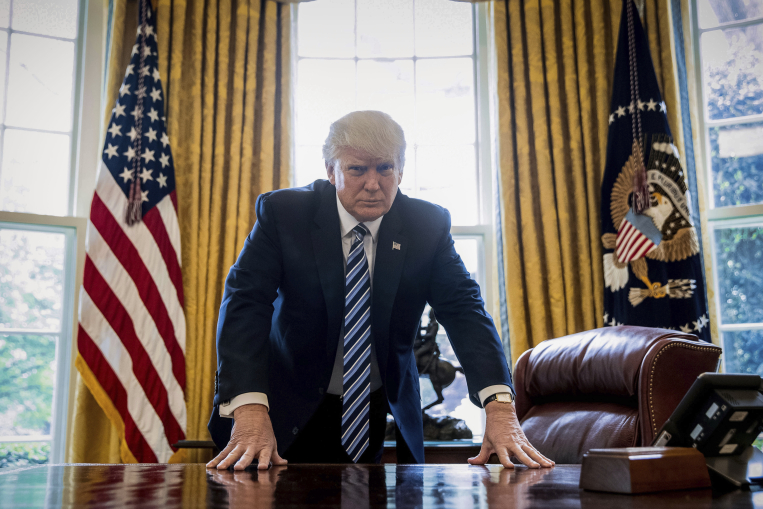 President Donald Trump has just finished his first year as president of the United States.

Opinions editor James Rudolph talks about what failures Trump managed to tank in his first year of office, while staff writer April Pfrogner talks about his successes.
James Rudolph
Without a doubt, president Donald Trump has left his mark on the U.S. Presidency and in U.S. history, but not for any good reasons.

One year and seven days have passed since he took his Presidential oath. In this amount time, president Trump has disrupted our political process, supported legislation that has done more harm than good to the country and the international community, and has been wrapped up in a conspiracy that reaches Watergate-like levels of corruption.

He has effectively thrown the White House into disarray while making the American leadership a laughing-stock of the international community. In the same stroke, Trump is failing to keep promises he made during his campaign. Despite only a year and some-odd days as president of the United States under his belt, it’s safe to say Donald Trump’s run is a failure.

The White House is in disarray because of Trumps presidency. Numerous individuals have been fired or resigned since January of 2017. Even former allies, like Sean Spicer and Steve Bannon, resigned after conflict with the president.

Former counterterrorism adviser Sebastian Gorka stepped down because he felt Trump’s agenda had been hijacked by establishment figures. Even Dina Powell, Trump’s deputy national security advisor who was a driving force behind Trump’s Middle East policy, said she plans to depart the administration this year.

Most recently, the entire White House counsel threatened to resign when Trump ordered the firing of Robert Mueller III, the special counsel in charge of the Russia investigation. What some Republicans may see as an act of defiance to the President is in fact people protecting the office and power of the Presidency. Even those around Trump clearly feel the President isn’t doing his job properly.

The president has destroyed a government agency, the Environmental Protection Agency. With placing Scott Pruitt as director of the EPA, Trump has strangled the EPA and prevented it from accomplishing its mission of environmental conservation.

With his constant denial of climate change, despite scientific evidence from the global community, he instilled in his supporters that the EPA does more harm than good for the American people. Additionally, his intentions to leave the Paris Climate Accord reduces the impact the United States has on fighting greenhouse gasses. He claims the agreement placed an unfair burden on the American people, despite using 18 percent of the world total primary energy consumption.

In the eyes of the world, Trump has made the United States a volatile, unpredictable force in the global community. Our allies, such as Germany, France and Canada have openly opposed Trump’s political objectives.

News sources like The Independent, The Economist, Newsweek, Politico, and Washington Examiner said that the President of the United States is no longer the “leader of the free world,” and Angela Merkel, Chancellor of Germany, is now that leader.

The President and his cabinet seem to prefer countries that have rigid control over its citizens. Despite having a hard stance on Islam and its followers, president Trump and his cabinet enjoyed visiting Saudi Arabia.

Wilbur Ross, U.S commerce secretary, praised Saudi Arabia for their “lack of protestors.” Meanwhile, protesting is illegal and Saudi Arabia and those who protest face execution. Ironically, the president prefers the laws of a country under Sharia law.

While keeping his promise to reverse Obama-era policies, Trump has failed on many of his campaign promises. He did manage to keep Guantanamo Bay open, he has failed to impose a hiring freeze on federal employees, build a wall while making Mexico pay for it, convince Congress to allow health insurance across state lines, increase veteran’s health care, bring back American manufacturing, defund Planned Parenthood, place a lifetime ban on foreign lobbyists raising money for American elections and eliminate the marriage penalty.

While fighting DACA has showed some success for the president’s agenda, federal judges are ordering the president to continuing renewing DACA applications.

On a side note, something that most people fail to mention, is that Trump promised to “fight” for the LGBT community. On Jun. 14, he Tweeted, “Thank you to the LGBT community! I will fight for you while Hillary brings in more people that will threaten your freedoms and beliefs.”

Meanwhile, under Trump’s presidency, the Department of Commerce tried to use new language in the federal government’s daily journal excluding LGBT federal workers from workplace protections. Even more blaringly hypocritical was Trump’s executive order banning transgender individuals from serving in the U.S military.

It’s difficult to look at Trump’s actions while president as anything successful. He has failed to meet his promises, anything he does pass is met with opposition from both sides of the political spectrum, and further alienates the nation from the rest of the world.

However, what saddens me the most isn’t the president, but the people who see what he has done and say, “But hey, the economy is good!”

April Pfrogner
Since President Donald Trump took office his accomplishments haven’t been fairly covered by most of our media outlets. We hear a lot about Trump being a racist, bigot, overweight, unfair, mentally unstable buffoon but little about his accomplishments.

I’ve compiled a list of things that, in my opinion, are making America great again.

Sweeping tax cuts were passed in December: 164 companies have given out over $2 million in bonuses to workers. Apple announced it would invest $350 billion into the United States economy over the next five years.

The stock market is soaring: You may see it in your 401k or annuity. I, personally, have watched my husband’s annuity gain over $20,000 over the last year. The Dow Jones industrial average has hit 62 record high closings since President Trump took office.

Health Care coverage: Although the Republicans failed to repeal Obamacare under Trump, the individual mandate was abolished, which means if you can’t afford to buy government insurance, you will no longer be punished with a yearly tax.

Border security and immigration crackdown: The number of people jumping the Mexican border has fallen to its lowest level in 46 years, according to the Department of Homeland Security statistics. An end to the Obama era “catch and release” was announced and Trump authorized the hiring of 5,000 additional border patrol agents. According to an article in Newsweek, there have been 97,482 illegal immigrant arrests, 70 percent were convicted of additional crimes and 52,169 have been expelled under Trump.

The fight against terrorism is a success: Radical Islam is in shambles now that Raqqa, its capital in Syria, fell. The project of constructing an Islamic state has been defeated, and thanks to a battle that has waged since Sept. 11, 2001 it has come to an end under Trump.

Oil drilling is back: President Trump gave the green light on drilling in ANWR, Alaska, which holds about 7.69 billion barrels of oil, according to the U.S. Geological Survey. This will decrease the price of oil and reduced reliance on imports.

Trump takes a stand on Israel: The president declared Jerusalem the capitol of Israel after decades of promises of presidents’ past and vowed to finally move the U.S. Embassy.

Cut the red tape of endless government regulations: For every new one created, they now must get rid of two old ones.

There are many more Trump accomplishments in the first year bringing the total to 81, according to The Washington Examiner, but many are more politically divisive than the eight listed above.

The media can run Trump into the dirt and, in my opinion, make a fool of themselves. I watch the stock market and jobs’ numbers. I am a firm believer that booming economy could win President Trump another term in 2020.

I agree with James Carville, campaign strategist for Bill Clinton’s successful 1992 campaign, who coined the phrase, “It’s the economy, stupid.”