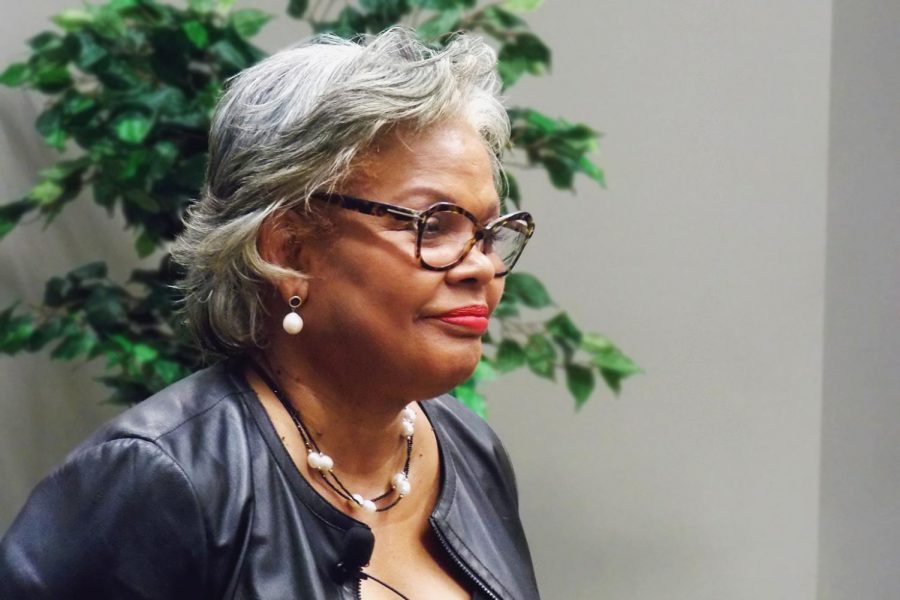 Geraldine Jones, president of California University of Pennsylvania, at Campus Talk on Nov. 14.

The most recent of President Geraldine Jones’ campus talks on Nov. 14, allowed for students and faculty to meet and discuss any noticed issues on campus.

The turnout was strong and saw students from many disciplines and class rankings in attendance. Student Government president Jonathan Hershey opened the event by discussing many of the new successful programs happening across campus. He ended his speech by introducing President Jones.

Jones’ first order of business was introducing an assortment of faculty members in attendance including the provost, the vice president of student affairs, the campus police chief, and the new food service executive, Dan Argento, who had come to address any questions the students may have about AVI’s plans for the future and its current state.

She also discussed some of the things happening in the Cal U community that really excited her. In a video published by the Pennsylvania State System of Higher Education showcasing how state schools give back, Cal U’s fraternities, sororities, clubs and volunteer activities were heavily featured. Transitioning into the university’s volunteer events, President Jones discussed Diane Hasbrouck’s position as the director of the Center for Volunteer Programs and Service Learning.

The center’s recent “Rise Against Hunger” produced 10,000 prepared meals thanks to over seventy volunteer and professional staff. Student Government Association’s annual Toys for Tots was promoted to assist in the collection of toys and donations.

In addition to talking about how Cal U has been giving back, President Jones also discussed many of the opportunities given to the university and its students. The international studies department, under the organization of program chair Dr. Sean Madden, was able to host a video exchange with college students in Perm, Russia.

The hour long session was summarized by Rebecca Stevens, the president of the International Experience club. “The exchange is a keystone for Cal U students to not only see the sociopolitical interests of international college students, but also to see their personal lives,” said Stevens.

After these announcements, Jones opened the session for questions. Many students had questions, quite a few regarding Greek life representation.  A few leaders and members of different organization voiced concern over a recent dip in Greek life enrollment. They believed that the university could be doing more to promote and market Greek life to incoming students.

Jones says she recognizes the importance of fraternities and sororities and will work with the Provost to amend the issue. The recent renovation plans for Coover and New Science were brought up, but the focus quickly shifted to the ambiguous future of the dilapidated Morgan Hall.

When asked if there were plans to restore or upgrade the fading facility, Jones responded with a simple “Yes.” Concerns over the eradication of minors and the removal of Mac computers from the Multimedia Access Center were both addressed as being incorrect miscommunications.

Finally, the session ended with a representative of the Theatre department thanking President Jones for her efforts in getting the sound system for the Mainstage in Steele Hall. Jones used the comment to laud praise on the program and advertise for the upcoming holiday production, “The Happy Elf.”