Cal U Theatre opens season with ‘An Evening of Creativity’ 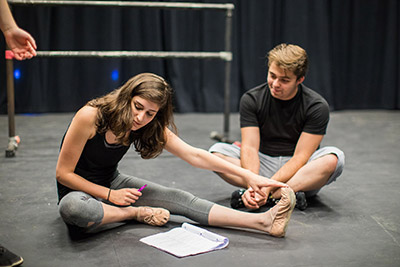 The Cal U Theatre department is kicking off their season tonight with “An Evening of Creativity.”

This show began last year in replacement of “An Evening of One Acts” to showcase a variety of talents including one acts, dance pieces and monologues.

This year’s performance kicks off with a one act titled “Bobby’s Ballet Lesson,” which was written by theatre major, Alyssa Freeman, and directed by theater alumna Sarah Martik. The one act follows the story of two children in a ballet class but one of the children notices the other child is different from the others.

This show sheds like on autism and shows how kindness can go a very long way. The cast includes Avery Grant as Leah; Alexis Hawk as Mrs. Davis; Sabria Johnson as Mother; and DJ Miller as Bobby.

Following that one act is a dance piece titled “Gravity 3.0” choreographed by Dr. John Paul Staszel and performed by Kacie Kubitza and Tristan Bartolomucci. This piece is meant to challenge the views of gender coupling and how power dynamics can shift with fluidity.

One final dance piece in the show is titled ‘Avaricious‘ which was choreographed by Diane Buffington and performed by the Cal U Dance Ensemble. The cast includes Marisa Badura, Laura Cook, Taylor Frost, Meagan Goben, Jenna Kelly, Mackenzie Moore and Rachel Wells who are joined by Kubitza and Abbi Hanley, This piece is a contemporary jazz piece that highlights greed.

This piece is based off of the 1990 “Saturday Night Live” sketch where Chris Farley and Patrick Swayze audition for Chippendales.

Photos provided in this article were taken by Kelly Tunney.

Ticket prices for “An Evening of Creativity” are $12 for adults, seniors and children. Cal U students with valid CalCards pay 50 cents, plus a $5 deposit that is refunded at the show.