The Battle of the Greeks Begins with Greek Sing 2017 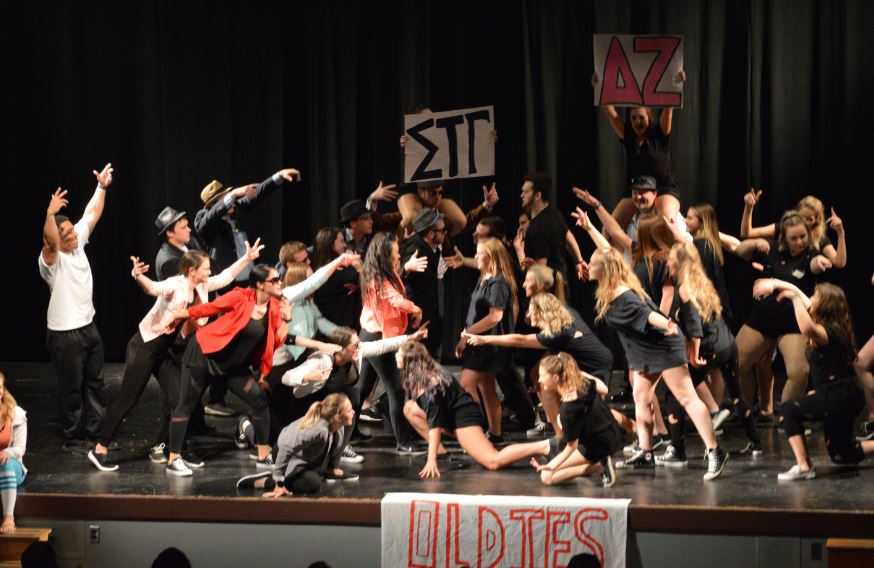 On Sunday, April 23 the Performance Center was packed by the Greek life organizations here at California University of Pennsylvania all competing in the Greek Sing competition. Greek Sing is a competition that requires sororities and fraternities to team up and create a themed piece to dance and lip-sync to.

This year’s competition consisted of four teams made up of one sorority and one fraternity. These teams were Alpha Sigma Alpha and FIJI, Delta Zeta and Sigma Tau Gamma, Alpha Sigma Tau and Acacia and Phi Sigma Sigma and Theta Xi.

Each team had a different theme that they built their performance around. Kicking off the night was Alpha Sigma Alpha and FIJI with a “Come Sail Away with ASA and FIJI” theme. They used a variety of songs to represent their theme as well as dressing like pirates to go the extra mile.

Following a strong opening act was Alpha Sigma Tau and Acacia who provided the audience with nostalgic feelings with a 90s themed routine and wardrobe. The audience was able to reminisce to songs such as “No Scrubs”, “Man! I Feel Like A Woman” and the “Macarena”. There were also theme songs to some of our favorite shows including “Spongebob”, “Friends” and “Kim Possible” featured in this performance.

The crowd thoroughly enjoyed Delta Zeta and Sigma Tau Gamma’s performance of “Oldies vs. Today” as the vibe from the previous performance was met with both 90s music and today’s hits. This performance consisted of a significant amount of props and quick costume changes behind the scenes before dashing back on stage for the next number all while smiling through their entire performance.

Closing the performances were Phi Sigma Sigma and Theta Xi with a theme of “Friday Night Lights”. These two organizations brought us all back to those high school days when you would fill the bleachers rooting for your team to win the big game. They even began their performance with pom-poms and jerseys to make the feeling real.

After a couple of minutes of deliberation the points were tallied and the winners were announced. In fourth place was Alpha Sigma Tau and Acacia, third place was Phi Sigma Sigma and Theta Xi and in second place was last year’s champions Delta Zeta and Sigma Tau Gamma. Alpha Sigma Alpha and FIJI took home the title of the 2017 Greek Sing champions.

“It was such an amazing feeling to place first in the Greek Sing after all of our hard work,” shared Alpha Sigma Alpha’s Greek Sing Chairperson, Ceara Davis. “We had so much fun as a sisterhood; and working with FIJI is always a blast. I am so proud of all of us, and now we are so excited to kick off Greek Week with a great start!”