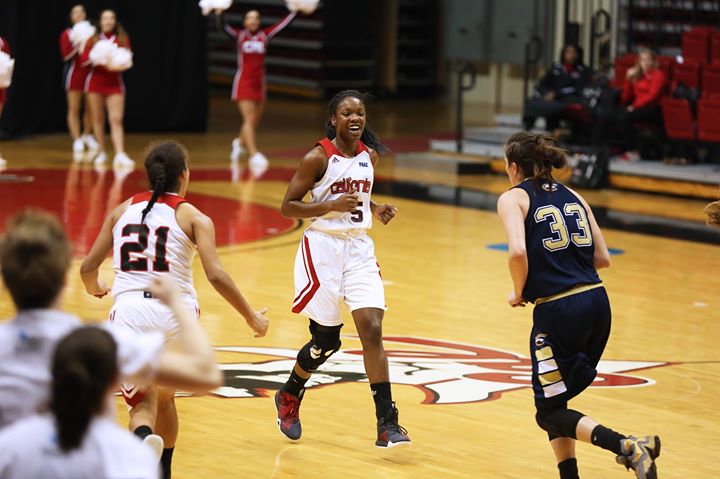 Junior forward Seairra Barrett reached a major milestone tonight, scoring her 1000th point, as the Vulcans defeated the Clarion Eagles 72-38 at the Cal U Convocation Center.

The Vulcan Women’s Basketball team has been on a tear since they last suffered a loss, outscoring their opponents 598-437 in a seven game stretch. As the team develops more of an understanding of each others skill sets, the amount of ball movement around the floor results in easy looks and a higher confidence down the stretch.

After finishing last season with a record of 25-6, only to lose in the second round of the NCAA tournament by only six points, the senior All-American Miki Glenn looked poised and ready to compete at the tip-off of the beginning of the season. With an average of just under 20 points per game and an impressive 6.9 assists to match, finding the open teammate to shoot the ball is her specialty.

Adding to the offensive production for the Vulcans is the grouping of Seairra Barrett, Shatara Parsons, Lana Doran, and Abbey Sporio all of which average nine or more points on the season. With the Vulcans having a great mix of both height and speed, California can get the fast break started, and lock down on defense on a dime.

With the athletic background of Seairra Barrett (Volleyball and Basketball) her cuts in the lane are precise and well-thought-out, and her defensive ability to lockdown on her matchup is equally impressive. She also has played in two fewer games than her teammates, making her a target on the court for other teams to plan for.

The young talent on the team hasn’t had the opportunity to get on the court much just due to the camaraderie that has been developed during this season, and ever since Parsons, Barrett, Glenn, and even Precious Martin teamed up to win a National Championship.

With the Women’s team starting off every double-header, the Men’s team was hoping to emulate a little of their success each game. When head coach Kent McBride came to California to replace long time coach Bill Brown, fans and players alike were anticipating the new game style that he would implement.

Along with McBride came a few other players that he recruited from around the nation, with Robel Teckle, Rashawn Brown, Ramon Creighton, Jay Tucker, and Jacob Thibodeau. After quite a few losses in a row, a regular team would hang their heads and check in, even though they have a whole half of the season left. This team however, is learning from each loss, and executing in various other departments.

Averaging 73.4 points this season is already an improvement from last season, a result of the new style of play that McBride has installed, getting his players to the hoop in an attempt to find the easy basket. Ball movement could be attributed to their improvement during the season, finding the open man, whether on the outside or in the lane.

The three-pointers made each game has also increased, as the number has hit 9.1, a stat that has been the highest since recordable history (pre 2003). The talented Vulcans team has also gave themselves more than one chance after shooting the ball first, grabbing an average of 37 rebounds per game, something that bodes well for the shooters on California.

Looking forward to the rest of their schedule, they still have to face off against four of top five teams in the PSAC West and the road to the finish is looking up after coming out of the Convocation Center last Saturday with a victory by a score of 69-52 over a Mercyhurst team who sits in the middle of the PSAC West this season.