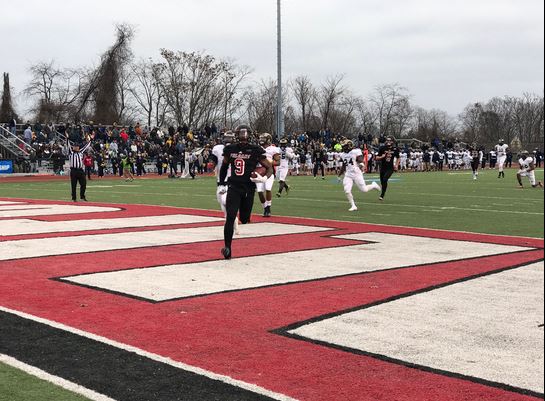 Stepping onto the turf of Adamson Stadium on a frigid December day, was a wish that went through every Vulcans football players head since the first day of summer practice. Getting to that day took a lot of hard work and resiliency, something that head coach Gary Dunn instilled in his players all season long. Flash-forward to December 3rd, 2016 and that is exactly where California found themselves. On the field on Adamson Stadium for a shot to play on for yet another week, this time, the Shepherd Golden Rams were in their way.

Coming into the game, both teams were not only undefeated, but they also have weapons on either side of the ball to help them towards a victory. The first quarter seemed as though the Vulcans would run Shepherd right out of the building, as they scored on a field goal, a rushing touchdown, and a punt return. After Shepherd answered right back with a run of their own, the mood inside the stadium quickly changed, as seven points put the Rams back into the contest.

The second quarter started, and so did the pressure that quarterback Michael Keir was faced with, when he was hit from behind, allowing Bruno Anyangwe to scoop the ball up and score from 36 yards out. As time ran down in the second quarter of play, Billy Brown hauled in a throw from his quarterback to cap off a 10 play, 94 yard drive, along with a 21-17 lead. Giving California the ball with only 40 seconds left before halftime wasn’t such a great idea, as Keir led his team down the field with a two-play drive that ended with a touchdown as he found Garry Brown in the end zone, and the lead going into the locker room.

California would could out of the break red hot, scoring with Garry Brown yet again on a 8 yard pass, but the extra point was blocked, making the score 30-21. Billy Brown would score on a catch of his own making it 30-27 and the final score of the third quarter.

California would not score at all in the fourth quarter, as Shepherd scored on the ground two times, once on fourth down to seal the deal and move on to face North Alabama at home.

This season for California was one for the ages. Going 11-1 while remaining undefeated through the regular season, one in which pitted the Vulcans against IUP twice, was impressive to say the least. Head coach Gary Dunn came into the Mon-Valley with a goal of turning this team around from last season, and he succeeded at that.

Garry Brown finished with 1,475 yard this season, along with 22 touchdowns, while averaging 16.2 yards per catch. Brown doubled his scores from last season as well as tallying 400 plus yards from scrimmage. California scored just under 50 points on average this season while their defense allowed only 16 points per game.

Michael Keir had a great first season as starter for the Vulcans, as he went 233-364 with 41 touchdowns and just 11 interceptions. While Keir started all 12 games this season, he racked up 3,222 yards while maintaining a 169.49 quarterback rating, and a 64 percent completion rate.

The stars on the ground this season included the four-headed team of Nick Grissom, Jalen Bell, John Franklin III, and Jimmy Wheeler. Throughout the 12 games, they combined for 1,830 yards and 21 touchdowns. With all four of these talented running backs coming back for the 2017 campaign, Vulcans fans have a lot to look forward to in the upcoming years.

This season was one in which proved that this team can do it all. Losing to a talented team in Shepherd was a wake-up call for next season. The Vulcans are a driven bunch of individuals who don’t take losing lightly, and will be back next season.