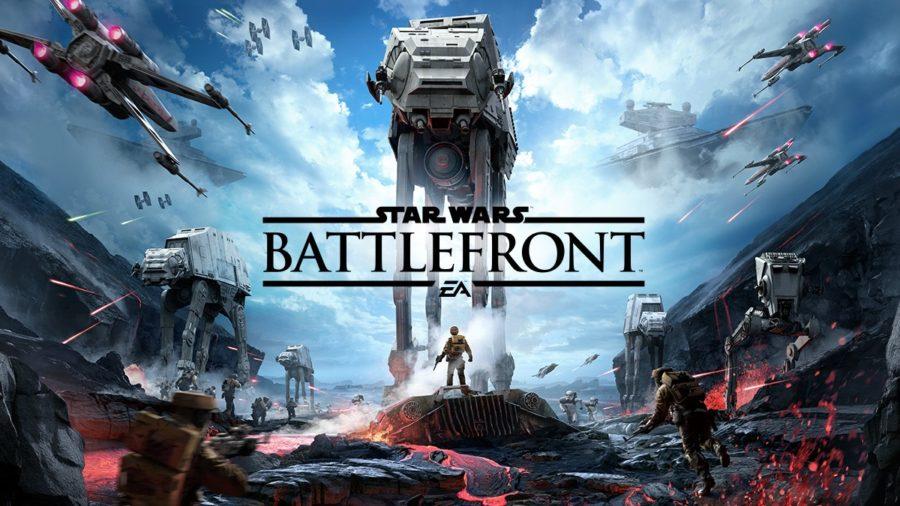 Star Wars Battlefront is an action shooter video game mostly based off of the Star Wars Original Trilogy. With the game approaching its first anniversary, November 17th marks a year since it has been released, the game has changed drastically with added content through free and paid DLC. The game was initially released with 9 small maps, 3 fighter squadron maps, 4 large maps and 9 game modes. Since its release date, The Battle of Jakku was released as a free DLC for all players. The free DLC added a large and small map as well as a new mode called Turning Point. EA, the publisher of Battlefront, listed a detailed expansion pack announcing 4 total DLC’s with each adding its own set of Hero and Villain, game mode and maps. In April the Outer Rim DLC was released on the 5th to season pass owners. On June 21st the Bespin DLC was released to season pass owners. The most reason DLC to be released was Death Star which was released on September 20th to season pass owners. The fourth and final DLC to be released is based off of the Rogue One film and will focusing on the tropical planet Scarif. Players will be able to storm the beaches this December when it is released alongside the new film. The video game captures the feel of the Star Wars universe but suffers with numerous flaws.

The game is available on PlayStation 4, Xbox One and PC. There is the Standard edition, Deluxe edition, season pass and soon to be released Ultimate Edition. The Deluxe edition is nothing noteworthy over the Standard edition besides having an emote, a taunt during matches, and having a weapon unlocked from the beginning. The Ultimate edition features the game with the season pass expansion pack. It will be released on the anniversary of the initial release and will only cost $40. The full prices of the game at launch last year was $60 for the game and $50 for the expansion. The game also has a companion application available through the Apple and Google play store. The app adds to the experience of the game and also has a mini game that gets in game credits for playing.

Battlefront is my favorite Star Wars game and one of my favorite video games of all time. There are many things that I wish were different but it is still so enjoyable to play. I currently have 139 hours into the game so far. This article is to outline a few things that I enjoy, a lot that I do not and what I would like to see added.

What The Game Does Well

First off, the video game is beautiful. The visuals are very good with a lot of detail oriented maps and superb audio to go along. From Emperor Palpatine using the Force Dash to the explosion of a Thermal Detonator, the sounds of Battlefront are spectacular. The game itself when it was initially released lacked a campaign and did not have a widespread amount of maps. Through free and paid DLC content, the game’s maps, modes and character selection has greatly increased. The Outer Rim, Bespin, Death Star and soon to be released Rogue One: Scarif DLC’s added even more variety to the game. When The Outer Rim DLC was released, a new feature to the game was announced alongside. Hutt Contracts added more objectives for players to achieve. They work by buying a contract and then fulfilling the requirements and when it is achieved a certain weapon or star card is unlocked.

What the Game Needs Improved On

The game suffers from a couple notable flaws. First off is the gameplay mechanics. While walking through Swamp Crash Site or Sulfur Fields, rocks and tree limbs often are hard to get over. It is a pain maneuvering with Emperor Palpatine and having to use his jump or Force Dash just to get over small objects is quite annoying.

Getting stuck seems to happen fairly often. There is no real way to get out of being stuck besides either blowing yourself up or using a jetpack if you are lucky enough to have that equipped. An especially frustrating thing that can happen is when you are a Hero or Villain and you get stuck. That might be one of the worst things to happen during a match because it is sometimes very hard to have the chance to play as one depending on the game mode.

Only having two ‘hands’ is another issue that is bothersome. Throughout the match you can switch your weapon to any that is unlocked but there are only two hands that have four star cards each. The hands are set before the match begins and since there are only two hands there is not a wide range to use during a match if a particular instance arises.

The game gained a lot of criticism early on from the lack of no campaign. The game was $60 at launch for the standard edition but felt empty and lacking content that a normal game would typically have. If they decided against having a campaign, then there should have been plenty of other content to satisfy customers. For 5 months there was not a major expansion to the game. Outer Rim added more content than any of the free DLC but still was not enough to fill the void. 11 months after the game has been released, the amount of DLC added makes the game full of modes and maps but that isn’t to say it has its own flaws.

The game handles DLC game modes poorly. Each DLC is segregated into its own playlist which shuffles through game types after you play on the rebel and imperial sides. Although this is not a problem, it gets frustrating when you want to specifically play Sabotage and after one match your next is Walker Assault. There are four maps to play Sabotage yet I find myself playing on one particular map with no option to just play Sabotage on all four maps consecutively. I think that this hinders the experience of playing the DLC since there are game modes that are not wanted to be played. For instance, finding a match for Heroes Vs. Villains on

Now into my biggest complaints of Battlefront. The selection of Heroes and Villains baffles me. Chewbacca, a character that has been in five out of the seven chronological movies took 11 months to be added. Why is one of the most iconic players not added sooner? Who knows. In the first DLC announced, The Outer Rim, Greedo and Nien Nunb were the first chosen to be added as playable characters. This decision was made because of where they appeared in the films but why would they choose Nien Nunb as the first added DLC character? For example, of why I am baffled, some of the most iconic characters in the game to not be added, and probably will not be, are Yoda and Obi Wann Kenobi. Both of these Heroes are extremely iconic with Obi Wann Kenobi appearing, in one way or another, in all of the Star Wars movies to date. He was a main character in the Prequel Trilogy, Luke’s trainer in A New Hope, a Force Ghost in Empire’s Strikes Back and Return of the Jedi and had a line during Rey’s vision in The Force Awakens. He has also appeared in both the animated series and is rumored to be featured in his own solo film. Yoda trained Luke for half of Empire Strikes Back and had a significantly more amount of screen time than Nien Nunb. I do not understand the choice of Nunb but this is a criticism that Dice and EA, the developer and publisher of this game, made the wrong call on. Villains added to the game are bounty hunters, Greedo, Dengar and most recently Bossk. The villains are limited on screen time with the Original Trilogy but I do like the choices of the Bounty Hunters. It is disappointing to not see Grand Moff Tarkin, the commander of the Death Star, to not show up in the Death Star DLC. Bossk is a great addition to the game but it would be great if there were more playable characters in this game. The Heroes available that

were added was Nien Nunb, Lando Calrissian and Chewbacca. Lando Calrissian is an extremely fun and currently overpowered character that is a great addition to the game. Chewbacca is the slowest character in the game, slower than normal fighters, but has stronger health to compensate. His design seems off and does not accurately reflect the appearance of the Wookie that we know and love in the films.

It is quite disappointing that the game will only have four added heroes/villains in each DLC. The Original Trilogy had numerous characters that could be added for both sides. It would be a huge courtesy to fans and add hype to the game if they decided to add in more characters.

Here is a list of potential characters that each side could add in no particular order.

Admiral Ackbar – how amazing would it be to have one of his taunts be “It’s a trap!”? He is a highly regarded official in the Star Wars movies and would be a cool addition to the game.

Obi Wann Kenobi – another Jedi would be very exciting to play with and it would be interesting having an old man running around.

Yoda – Speaking about adding another Jedi and having an elder running around, how amazing would it be to play as the 1000-year-old Jedi?

Wedge Antilles – One of the iconic Rebel fighters would be a nice addition and would add an extra hero character in Fighter Squadron due to him fighting mostly in the X-Wing.

IG-88 – One of the coolest droids in the entire galaxy would add to the already extensive Bounty Hunter line up.

Grand Moff Tarkin – The commander of the Death Star could possibly have his own type of body guards which would add to the Villain line up.

Jabba the Hutt – A little ridiculous but the giant slug probably would not move fast but it would be extremely unique seeing him slither his way across the map. He would most likely have some sort of body guards accompanying him and could have a high defense similar to Chewbacca.

Zuckuss & 4-LOM – This Bounty Hunter pair is not well-known but would add another dynamic to the game especially if one was the main Villain and the other would be played as the ‘body guard’.

Here is a list of all the maps and modes available to play, * denotes added through DLC.