A Beautiful Soul Stops By Cal U 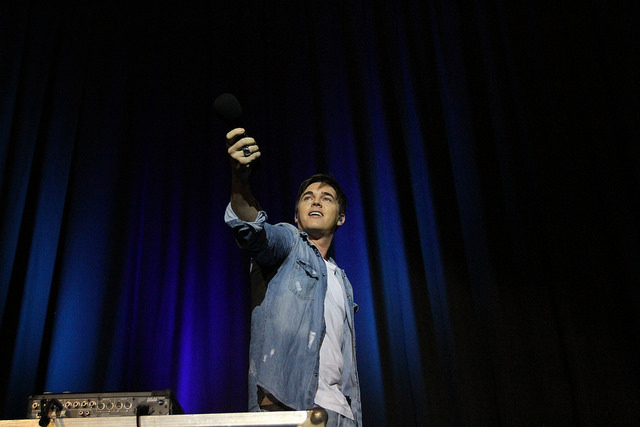 Jesse McCartney performs at Cal U.

On Thursday night both the students of California University of Pennsylvania and the public were able to take a trip down memory lane as former teen pop-star, Jesse McCartney, performed in the Convocation Center. It was announced during Riverfest back in August that McCartney was being brought to Cal U by the Student Activities Board and Underground Café.

The popularity of the show resulted in tickets being sold out within the first six hours the day they went on sale. Since tickets sold out so quickly, the Student Activities Board and Underground Café began to offer ticket giveaways at the majority of their events before the show.

Some of these events included giving away tickets after illusionist Elliot Zimet’s show, having certain candy pieces at Underground Café: Vulcan Village marked for tickets and giving away tickets to people who came out to get ice cream from the Caustelot Creamery truck. On the Monday before the show, 200 more tickets were released with 100 being sold at the Natali Student Center info desk and the other 100 being sold behind Duda Hall.

Two hours before the show began, there was a pre-event going on outside of the Convocation Center. The event included music from WCAL, ladder ball, Kan Jam, corn hole and more ticket giveaways. Although many students did not take part in the games offered due to wanting to save their spots in line, students made up for it by listening to the music being played.

Fans started to line up an hour and a half before the doors opened to guarantee themselves front row seats for the show. Once the doors opened students were subjected to a bag check and wanding upon entering the facility to ensure the safety of both McCartney and the others in attendance. Upon clearing this process some loyal fans ran up the stairs to claim their seats while other browsed the merchandise for both McCartney and the opening band, Hear Tonight.

Cal U’s very own Hear Tonight went on stage to open up the night and provided the crowd with a great amount of energy before McCartney went on stage. Upon finishing their set, Hear Tonight received roaring applause and the anticipation began to rise for McCartney’s first appearance.

Dory Lobel, McCartney’s guitarist, appeared on stage first and began to play the intro to one of McCartney’s hits: “Leavin.” As soon as McCartney appeared the crowd instantly rose to their feet and began to scream. McCartney brought big time fan, senior Katie Murano, on stage and serenaded her for a song.

At the end of the night most of the crowd went home and social media was flooded with various pictures and videos capturing the night’s events. A couple of fans stuck around the Convocation Center with hopes of catching a last minute glimpse before McCartney left, resulting in the Student Activities Board having to sneak him out a different door.

With this concert being a large success for not only the Student Activities Board and Underground Café but for the entire Cal U community, hopes are high that bigger concerts are heading this way.