Cal U Women’s Basketball win one, lose one before IUP 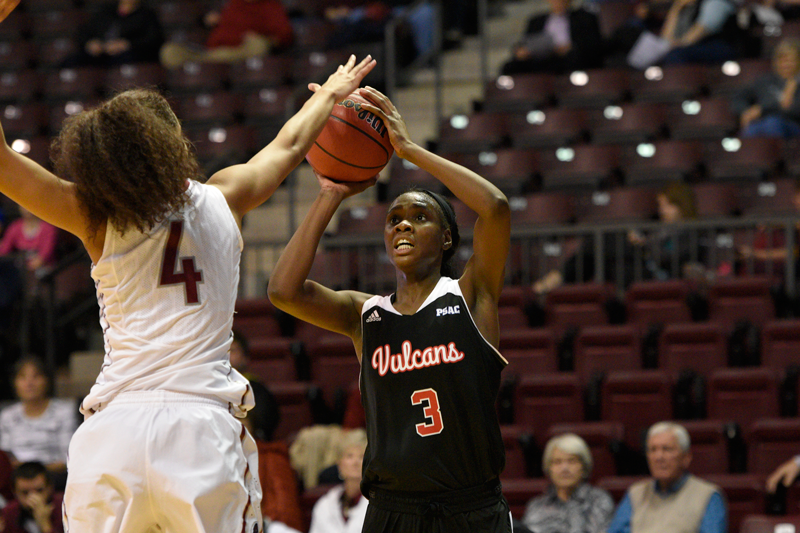 Shatara Parsons, a sophomore, has played in all 16 games this season for the Vulcans, and has averaged nine rebounds per game and 1.6 blocks per game.

The California University of Pennsylvania women’s basketball team faced Edinboro University on January 20 at Edinboro. Outside the gym, it might have been snowy and cold, but inside the girls from both teams were heating up. California was on a winning streak against Edinboro, dating back to 2013, when Miki Glenn and Precious Martin were finishing off their freshman seasons. The only difference in this game was that both girls are now team leaders in points and have pivotal roles in the offensive rebound game.

California started off this game on an 8-0 run and Martin was a big part of that, scoring six of the team’s eight points. Edinboro would come back with points of their own however, with a 11-3 run over a five-minute span to tie the game 17-17 with six minutes left in the second quarter. After California scored four more points, Edinboro would open the game up, making it 30-21 with four minutes left in the first half. The Fighting Scots would continue their scoring streak, making it 37-29 at the break. Miki Glenn and Precious Martin had a combined 25 points in the first half and Seairra Barrett, along with Shatara Parsons, were a force in the rebound department, with a combined nine rebounds, with seven coming off the offensive side.

The third quarter started off with a 7-2 run from the Vulcans to cut the deficit to 41-36 after the ball was moved efficiently to players that weren’t producing in the first half. The ball movement allowed for Seairra Barrett and Shatara Parsons to get in on the scoring as well, making the lead 47-44. Edinboro continued to stretch the lead, but California did not let up, almost coming back after Shatara Parsons made the score 56-52 with 6:26 left to play in the game. Edinboro closed the game on a 17-2 run, limiting California to only one field goal in six minutes making the final score 73-54.
California finished the game shooting 32.8 percent and went 14.3 percent from behind the three-point arc. Although California started off grabbing all the rebounds, Edinboro collected 47 rebounds while the Vulcans only grabbed 27.

After a disappointing loss to a strong Edinboro team, the team set their sights on Mercyhurst, looking to increase their standing in the PSAC West. The Vulcans were trying to improve on their failures in the last game and get out to a fast start, keeping the offensive rebound numbers up as well.
Glenn and Paige Wright began the scoring for the Vulcans making it 9-4 early in the game. Mercyhurst was staring to heat up after they scored nine unanswered points, taking a four-point lead just before the first quarter ended. The leads changed multiple times through the first quarter and Glenn hit a jumper with six seconds left to give them a 20-18 lead going into the second quarter.

Just three minutes into the second quarter, California went on a 9-2 run to give them a 29-22 lead with 7:00 left before half. The Lakers worked hard in the paint to get high efficiency shots, cutting the lead down. However, California countered with shots of their own. Six straight points from the Vulcans allowed them to take a sizeable lead into half, but a buzzer beater from Mercyhurst only made the lead 41-38 at the break.
California and Mercyhurst continued to trade leads throughout the third quarter and around the five-minute mark, stretched the lead to 52-44 before the Lakers answered with a 13-5 run over a four-minute span. Glenn would make two free-throws right before the third quarter ended to give California a two-point lead going into the fourth.

Mercyhurst started to increase the tempo and took the lead thanks to a 13-4 run over a four-minute span in the beginning of the quarter. The Vulcans then tied the game at 70 when Morgan Jennings hit a key three-pointer to give the spark that the Vulcans needed to wrap the game up. After Barrett scored a clutch basket in the lane, Parsons capped the victory off with a block on a last ditch effort for the Lakers. With this victory, the Vulcans move to 12-5 on the season with a 7-1 record at home.

Playmakers for California needed to step up in this game and that’s just what they did. Glenn registered a career high 36 points and as a team, they shot 50 percent from the field. Another key factor was their free-throw shooting in which they converted on 68 percent of their attempts.
The women’s team will join the men’s team in traveling to Clarion University to take on the Clarion Gold Eagles on January 30. The women’s team will face a Clarion team that currently has a record of 6-13, with their PSAC record being 6-7. The women’s game is scheduled to begin at 5:30 p.m.