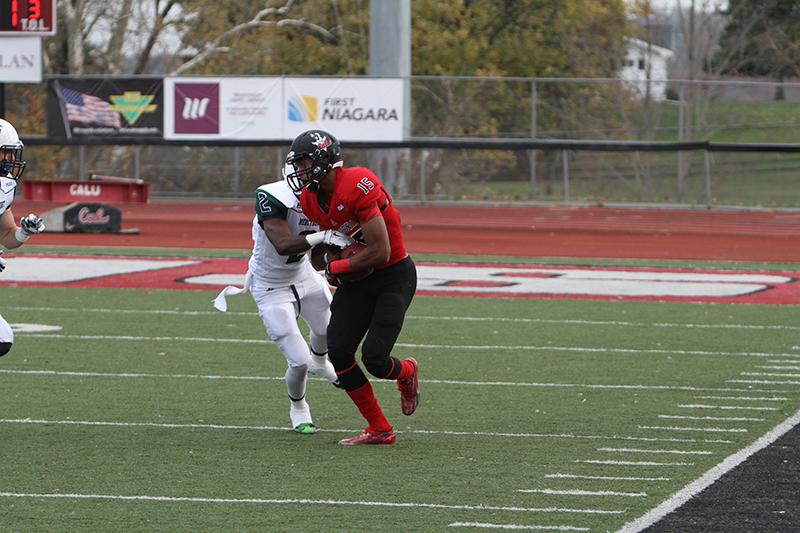 The California University of Pennsylvania Vulcans football team had a lot to fight for this week. Taking on the Mercyhurst Lakers at home on senior day was big enough, then it turned out they were ranked ninth in the nation which puts them two spots out of contention for a playoff berth. The Vulcans were fired up before the game, with good reason due to their current position. Everything had to be left out on the field and with every tic of the clock, the team had to come together and work as one.

The Vulcans knew their opponent, and knew what to expect from the Lakers defense. On the opening drive, better yet, the first offensive play from scrimmage, senior quarterback James Harris threw a perfect ball to sophomore Luke Smorey, who quickly shrugged off a defender and took the ball 75 yards down the field for a touchdown. An impressive stop from the Vulcans defense wasn’t even the highlight of the ensuing drive either, when a blocked field goal kept the lead at 7. Senior Kowan Scott shined on his senior day too, contributing 60 passing yards on the next drive, putting sophomore William Brazill in perfect field position to drill a 24 yard field goal making it 10-0 in favor of the Vulcans. The quarter would end with Mercyhurst in possession, driving down the field.

The second quarter would open in a strange way, after a roughing the kicker penalty on a punt gave the Lakers a first down and allowed them to get a drive started again. Yet another blocked kick at the end of a drive that took 9:32 in its entirety gave California the ball back at their own 20. The explosive duo of John Franklin III and Jimmy Wheeler took the Vulcans all the way to the end zone with a one-yard rush from Franklin. John Franklin would extend his streak to 10 games with a score in the first half, being a constant contributor to the Vulcans offense scoring in every single game this season. A close call from the Mercyhurst quarterback would give the Vulcans defense enough energy to finish out the quarter, keeping the score 17-0 going into halftime.

A rush heavy offense led by Brandon Brown-Dukes for the Lakers opened up the second half, marching 73 yards, taking 8:41 off the clock, making the score 17-7. A healthy dose of both passing and running allowed Harris to take control of his offense, a putting more points on the board after a two yard touchdown pass to Laker killer Garry Brown. Going up 24-7 right before the end of the third quarter gave the Vulcans what they need to stop the Lakers and come out with the victory.

California would be stopped on their first drive of the fourth quarter, giving the ball to the Lakers and allowing them to start a comeback. Logan Weaver would enter the game for Mercyhurst after a big hit knocked Laker quarterback Zach Emerick out of the game. Weaver would come up big for the Lakers on a 15 yard pass into the end zone making the score 24-14. Franklin would pat his stats some more on the next drive, when all of the plays went to him after the drive started with a pass to Garry Brown. The score increased to 31-14 with only 1:45 left on the clock. Mercyhurst would answer back with a quick drive of their own making it 31-21. On the kickoff after the touchdown, the Lakers would recover their own onside kick but senior Chaz Veal ended his final game at Adamson Stadium with an interception, ending the game, giving the Vulcans the win.

The Vulcans now riding a three game winning streak sit one spot out of the last playoff spot in the Atlantic region at eighth. They will travel to Lock Haven to face off against the Bald Eagles at 1pm needing a win and some help to make the playoffs.