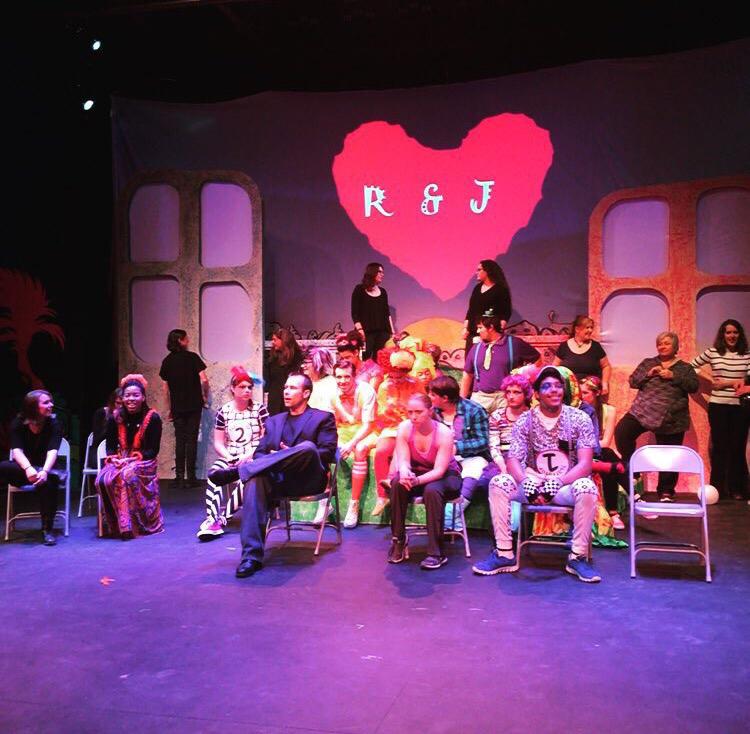 The Seussification of Romeo and Juliet took over the Blaney Theatre in Steele Hall last weekend. The fun, light-hearted performance had four different shows, and served as this year’s freshmen show.

From the very minute I heard about The Seussification of Romeo and Juliet, I imaged plenty of rhyming, big hairdos, tall and striped hats, and ridiculously-named animals.  Surprisingly, I found myself enjoying the Seussification of Romeo and Juliet in a very adult way.  The Department of Theater and Dance’s 19th anniversary first year show was a spectacularly childlike performance of a modern romance.

Two emphatic actors, Felix Rivera and Ellie Lahm, narrated an all-too-familiar plotline.  Luckily, these two first-year students were cheery and bright enough to remove the more gruesome parts of the original play.  For example, neither Romeo nor Juliet truly died.  Instead, Juliet purposely faked her death to avoid the control of her mother and to run off with her true love, Romeo.  Junior Sarah Youngdahl, who is studying accounting at Cal U., said, “I like the twist.  We’ve seen a modern Romeo and Juliet and [an] old time version.  This was just a fun version!.”  Indeed, the actors and actresses seemed far livelier and more spirited than any tragedy

The greatest part of the performance was definitely the characterization.  Juliet’s mother always seemed to enter the stage with a glass or bottle of wine in hand.  Her daughter’s nurse unceasingly rolled her eyes at the mother, and young Juliet had her nose in her cell phone as often as would be expected of a modern teenager.  Romeo’s enchanting inability to make poetry made the audience fall in love, including Sarah, who named Romeo her favorite character of the show.  Every actor stayed true to a different quirky personality, which made the four-year-old girl who sat in front of me cackle with joy.

Along with being Seussified (although Dr. Suess was not involved with the making of the play), Romeo and Juliet were also brought into the present.  Oftentimes, the audience was given a snapshot of the pictures and videos that characters had taken on their phones.  Paige Zalar, a communication studies major, directed the show.   Annabel Lorence was the costume designer, while Kylee Henry and Brendan controlled the play’s sound effects.  Special effects made the show hilarious.

From four years old to fourth-year college students, everyone in the audience November 19th, 20th, and 21st enjoyed the Department of Theater and Dance’s first-year performance in the black box theater. Cal U’s first year students showed their stripes, suspenders, and funky colors.  The Department of Theater and Dance’s next show, Miracle on 34th Street, the Musical, opens December 3rd at 7pm, playing at the same time in the 4th and 5th, as well as at December 5th and 6th at 2 pm.  As a happy audience member, I would encourage students of every major to see the show for a very low price of fifty cents per ticket at the door.