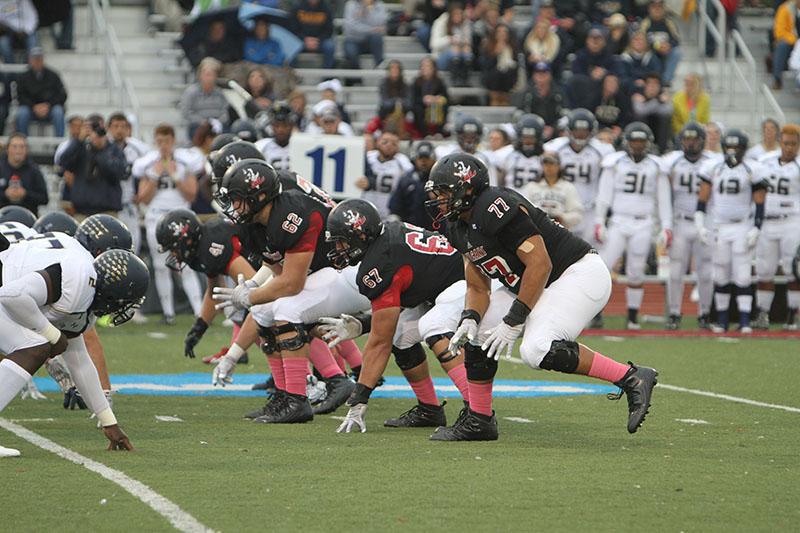 A record that dates back to 2004, the California University Vulcans have not lost to an opposing football team on homecoming. This year, the stakes were higher due to Clarion being undefeated and being ranked 25th in Division II. Not only were the emotions high, but the chance that there would be rain was too. Featuring a quarterback from Clarion who threw only four interceptions in the season up to this point, and California’s defense, who registered 13 all season, this game was destined to be great.

Clarion won the coin toss and elected to receive and Clarion quarterback Connor Simmons would open the passing for the Golden Eagles on a 30 yard pass to his junior receiver, Kevin Genevro. After a short, three yard run, Simmons would drop back into the pocket and try to fit the ball into a narrow window. He quickly set his feet and heaved the ball, overthrowing the receiver and allowing Aaron Terry to jump in front and pick the ball off, taking it 47 yards down the field to Clarion’s 11 yard line. James Harris would not be discreet in this one either, taking his offense into the end zone on a 17-yard pass in the corner to his favorite target, junior Garry Brown.

Clarion would answer right back on a drive of their own though with a 10 play, 78 yard drive capped off on a six yard slant route after the Genevro extended the ball. Sophomore John Franklin III would continue his streak of eight games with a touchdown in the first quarter when he dove in from two yards out. The defense for the Vulcans would come in huge on the next drive with two consecutive sacks from the sophomore transfer, Justin Baker. A short punt would set California in great field position, and put them in the driver’s seat for another score before half. With a myriad of runs, from three different running backs, Franklin would score again from 1 yard out to make the score 21-7 and the half would end after a failed possession from Clarion.

The Vulcans opened the second quarter with an interception from Myles Edmonds who took the ball down to their own 29. Yet another defensive stop from the Vulcans forced 4th down and a short punt ensued. A few penalties afflicted California’s offense and forced them to give up the ball yet again. The punt led to Clarion taking the ball 64 yards in 1:34 to make the score 21-14 in favor of the Vulcans. Jimmy Wheeler would step into the spotlight again on the next drive, marching into the end zone from 10 yards out making the score 28-14 at the half.

The third quarter would produce two scores, both from California. On a short screen pass, Cameron Tarver jumped up and in the process picked the ball off and ran it back 50 yards to score a touchdown for the Vulcans. Only one offensive drive later, Harris would assert his dominance yet again on a 21 yard pass to Brown for his second score of the day. The scoring gap was expanded to 42-14 and it looked as though the game would be out of reach.

However, the unbeaten Golden Eagles would not go away as they came out flying in the 4th quarter.  On an impressive drive, they would get on the board for the first time since the beginning of the second quarter. A costly fumble from freshman running back, Jimmy Wheeler, would give Clarion a chance to score yet again and they took advantage to cut the lead to 42-28. The next drive was absolutely key for the Vulcans, when they ran 8:35 off the clock, leaving Clarion with only 1:49 to score. Just as Clarion moved down the field All-American Safety Jordan Bowman intercepted a ball at the one yard line, sealing the deal for the Vulcans and a sixth interception for Simmons.

This win not only continued the Vulcans success on homecoming, but also knocked the Clarion Golden Eagles from the ranks of the unbeaten, giving them their first loss of the season. California now will travel to Erie this upcoming weekend to take on the Golden Knights of Gannon with kickoff to begin at Noon