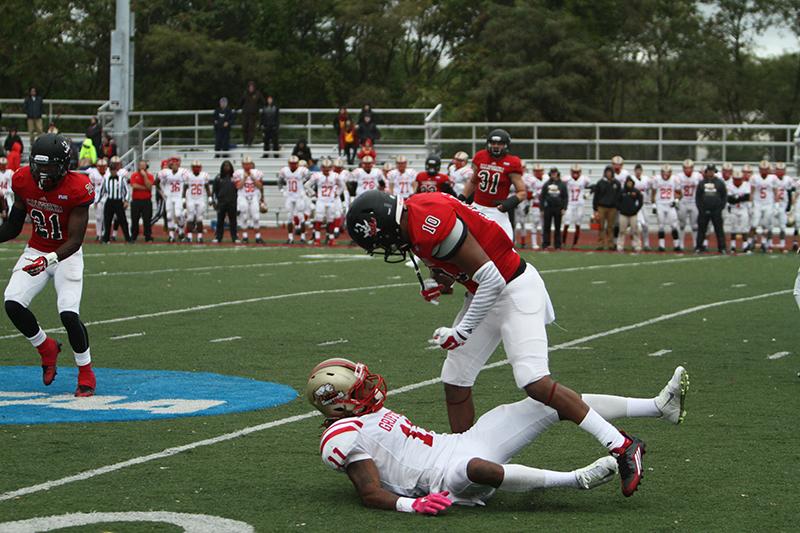 Despite a strong performance from the Cal U defense, IUP’s running game was too strong for the Vulcans in last Saturday’s Coal Bowl loss to the Crimson Hawks

California had the biggest road test of their season against IUP this past weekend, a game that has been a huge rivalry since 1918. This years game fit right into the normal criteria for the Coal Bowl, bitterly cold and extremely intense. The game time temperature was 39 degrees but as the night progressed, the wind chill affected not only the type of precipitation but also both teams abilities to catch the football. The challenges this year happened to be slightly different however because IUP had a new, and improved, quarterback at the helm. Lenny Williams, a transfer from Temple, ranks 7th in all of Division II with 87.6 yards/game and 581 yards in the air. This combo of being mobile and having a decent arm allowed him to slice through the Vulcans defense.

James Harris and the California offense took the field first and started out strong with quick passes and strategic runs. Harris integrated all of the wide outs on the first drive, marching right down the field and into IUPs territory. Last weeks game showcased freshman running back, Jimmy Wheeler, a redshirt freshman and a local to the area. He shined through yet again on the first drive, when he ran for a 12-yard touchdown. After a missed extra point, IUP would get the ball back and have a drive of their own when they went 86 yards in 9 plays to go up 7-6 thanks to a 32 yard run from feature back Chris Temple. California would take the field, looking for vengeance against their missed extra point. After seeming as though they would be stopped on a fourth and three, Luke Smorey ran for 16 yards, giving the Vulcans a first down to keep the drive alive. Jimmy Wheeler would yet again keep the Vulcans alive and take them down the field on 13 plays, only producing a field goal however. The quarter ended with IUP in possession, driving down the field.

On the drive that closed the first quarter and opened the second, Lenny Williams rushed for 38 yards, coupled with Temple’s second touchdown to take them into the end zone from a yard out. After that first score in the beginning of the quarter, the rest of the half would remain scoreless and it would stay 13-9 until the third quarter. Despite missing some scoring opportunities, IUP would open the second half with the football and in control of the game.

Chris Temple took over during the second half, when he broke a 46 yard run to the California 18-yard line. After getting stopped three times in a row, IUP decided to go for it on fourth and 1. Sophomore Corey Bopp and the Vulcans defense stopped the Hawks and got the ball back. When California took the field, they came out looking to get some points. It looked like Harris and Garry Brown connected for a 37 yard pass, however, a penalty on the play hindered them from moving the ball. That penalty then ruined their chances and stopped the drive from progressing. A few more drives stopped by the Vulcans defense produced nothing on the offensive side, leading to IUP scoring yet again with Temple getting his third touchdown, making it 20-9 with one minute left the third quarter.

In the fourth quarter, Cal was stopped near the goal line three times but they broke through and scored from a yard out as sophomore running back John Franklin III scored his 10th rushing touchdown of the season to make it 20-15 after a failed two point conversion and 9:46 on the clock. Calamity ensued on the kickoff after the swirling wind affected Cal’s kick as it went short and the Vulcans recovered before any IUP player could to get the ball right back. It seemed like an easy task to achieve, only being down by five with that much time left and golden field position, but an interception by Crimson Hawk defensive back Mikale Makel stopped Cal’s drive and held the lead. The Vulcans had one last chance to take the lead after starting at IUP’s 28 yard line, but once again red zone problems reared its ugly head again as Cal was stopped on 4th down from the four yard line to seal the win for IUP. In the 4th quarter, Cal ran every play in IUP territory and only came away with six points.

In a heartbreaking defeat in a huge game for the Vulcans, the Coal Bowl trophy was returned to IUP and California was sent home. This defeat was huge for IUP and could potentially set them up to win the PSAC West if they continue to win. The Vulcans take on surprisingly unbeaten Clairon this weekend at 3pm for their Homecoming game, which the Vulcans have not lost since 2004.