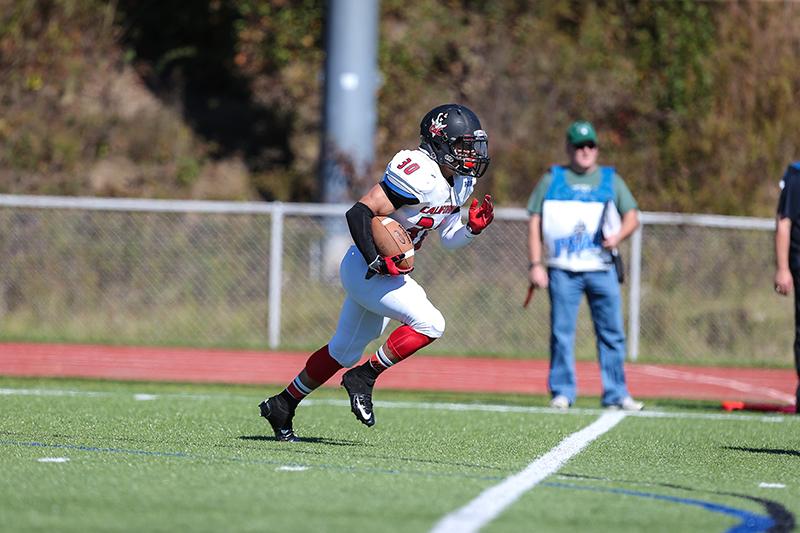 Coming off a spectacular win at home, California hit the road last Saturday to face off against one of their most heated rivals Slippery Rock on their homecoming. Facing a team who everyone knows can throw, California had to try and stop senior transfer quarterback Dante Nania. Slippery Rock was ranked fourth in the country with their explosive offense, putting up 3,132 yards including Saturdays astonishing 609 yards of total offense.

The Vulcans differed to the second half and Slippery Rock took this advantage after getting the ball first and drove down the field 78 yards after eight plays to make it 7-0. California showed in the past that John Franklin III likes to score on the first drive by way of the run and he did just that with a two-yard run up the middle and the Vulcans evened the scoring right up, making it 7-7. After that touchdown run, the scoring opened up for Slippery Rock. Dante Nania looked as though he was trying to make a highlight reel for the NFL when he threw a 74-yard bomb down the field into the awaiting arms of senior receiver Jaimire Dutrieuille. This widened the gap and made the score 14-7.

California would come out the huddle on Slippery Rocks 25 and tried to convert on 3rd and 7. James Harris dropped back and threw for a 10 yard completion before being stopped on all three attempts after that, giving the ball back to The Rock. After a punt gave Slippery Rock the ball on the 47-yard line, Aaron Terry, who has 2 INTs to his name, stepped up and picked off Nania to give him three on the year. A costly pass interference call from Slippery Rock was thought to give the Vulcans a shimmer of hope, however, the drive ended on a catch that fell short of the line on 4th down and 11. The ensuing drive took Slippery Rock 80 yards down the field, scoring on a quarterback rush for two-yards making the score 21-7. California would continue the three-and-outs when they got the ball back, giving Luke Smorey the ball to punt, putting Slippery Rock at their own 37 yard line. It seemed as though every time slippery Rock touched the ball it would end up in the end zone after they ended the quarter on a 16-yard pass making it 35-7 before halftime.

The Vulcans would get the ball back in the second half and being down by 28 points seemed like a huge task to overcome. An interception plagued James Harris and California when Titus Howard stepped in and intercepted the pass. On the run back from the interception, however, junior Garry Brown stripped the ball and fell on it, giving the Vulcans control yet again. The Rock would get 2 sacks on this drive, forcing California to punt yet again, resulting in zero points on the board. Slippery Rock would not stop the scoring when Nania ran for a 6-yard touchdown making it 42-7. James Harris continued to add to his passing yards on the following drive, although they would go three-and-out yet again. The highlights for the third quarter would end with 4:15 seconds on the clock when junior Shamar Greene scored from 1 yard out making it 49-7.

The fourth quarter opened with a delay of game which pushed Slippery Rock back even further for their punt. Senior linemen Errol Brewster flew through the line and jumped to block the punt, allowing Jordan Bowman to pick it up and run 40-yards into the end zone for a touchdown. California would block yet another punt on the following drive to start at The Rocks 18-yard line. Freshman Jimmy Wheeler would take the ball 18-yards for a touchdown gaining some ground back but it was too late ending the game with a final score of 56-21 after a few failed drives by both teams.

James Harris ended the game with 349 yards in the air with 3 INTs and no touchdown passes for the 2nd time this year. The Vulcans look to bounce back against the IUP Crimson Hawks this week in the Coal  Bowl at Indiana with the contest starting at 6pm.